A new name for my new life, a name that I love…

I have always wished to attend in Pride parade but it was usually in Istanbul and the police did not let us leave our city, or at least it was so hard to get the permission. 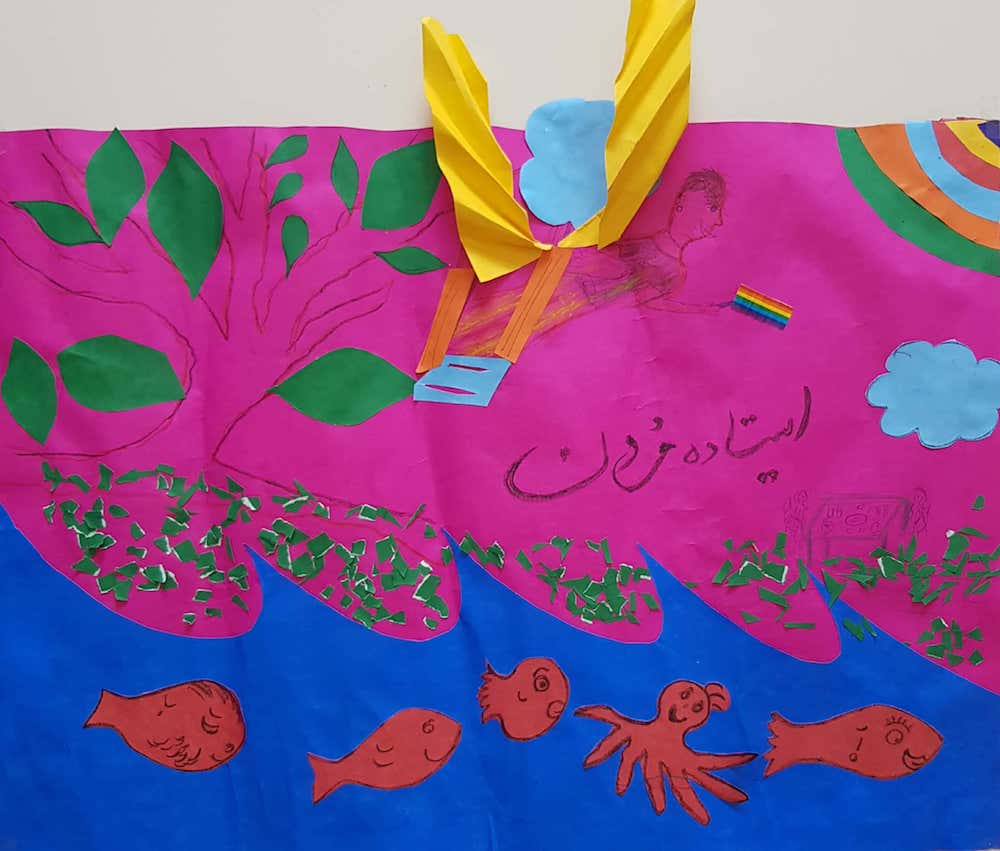 I’m Artin. Artin means purity and sanctity. For many people, it is a male name but for me that I see myself beyond male-female sexes is not as such. I am a homosexual. I was born as a girl, but I do not want to be called a man or a woman. Others can call me just by my name, Artin. I can be a queer or a non-binary. Artin, is not the name what my family chose for me. When I came to Turkey, a new period of my life began and I need a new name for my new life, a name that I love.

Let me shortly explain my life experience in Turkey.

As a refugee in Turkey, I have been here for 4 years. My refugee life started with lots of difficulties. There was no work to do, where it was, they did not give it to foreigners because we did not have work permits and if we could not get a job, there would be no financial support to afford basic needs. We were all alone by ourselves. I did not know Turkish. Finally, by the help of those Iranians who had come here before me and had learned a little Turkish language, I could find a job in a towel manufacture. I had to work 12 hours a day with low wage and short rest time while feeling missed, homesick and alone. For a person like me who had not experienced a life as such it was incredibly difficult. But the most difficult thing I have faced was this question: are you a boy or a girl. My answer was I am Artin, my gender is not your business but this answer has also its disadvantages. For example, when manual work increased I was told to help men, if I refused, they would say that “if you are a girl tell us and go deal with jobs that belong to girls” but for me there was no chance except putting up with the situation. I gradually get used to this kind of life. Now after 4 years of uncertainty I sometimes give myself up to despair, my body cannot physically and mentally put up with these difficult jobs. Anyway, there is no way but tolerating these situations. I hope my life gets back on the rails. I cannot make a long-term plan for my life due to my refugee condition. I know nothing about the future, maybe one day more, or a month, or a year or 10 years I will live here but knowing nothing about how much it takes time makes my life stagnant. Despite all of these difficulties related to being a refugee in Turkey, I feel good and this makes me happy since here I can live as I am, without fearing about declaring my identity as a homosexual. My calm here is more than Iran. In Iran, I could not live as I wanted. On the one hand, I was frightened by the government and on the other hand, by people and family. Once, I had tried to explain my sexual orientation to my family but due to their disturbing treats I lived 12 years by wearing a mask to conceal my real ‘self’. In Turkey life goes on with difficulties too; here, also there are lots of people who do not accept me but here I’m dare enough to unmask myself and declare that I am a homosexual. I behave as I want and I am not obliged to change myself, my life and also my dress due to a fear about my sexual orientation being heard by someone and got threatened by him/her. Many people oppose me but there are also those who accept me. That is so precious for a person like me, whose even most intimate family members, have not tried to understand or just do not annoy him/her. My father died when I was in Turkey and my biggest remorse is that why my father did not want to hear his child and accept they as they are even until his death? Why? What was my fault?

I wish one day I could tell my family about all the difficulties I have faced and still facing with to feel myself not alone, but I and many others like I are actually alone because we are not those whose families expect them to be. So, I decided to be strong and to have my own family, I mean LGBT family. Together we can fight against oppositions and difficulties and make a beautiful life for ourselves. I got to know it late but I am happy for knowing that because I was isolated and I did not participate in any LGBT groups, I had summarized my life in working. I was working hard to disrupt my thinking but step by step I figured out that it was a wrong method. After that, I sought to be with LGBT family and I rescued myself from my self-build prison so I started to attend the meetings of LGBTs, made many friends and found more motivations to live. For the first time, in the first day of May, International Day of Workers, in 2018, together with my LGBT friends I went to the street of the city in which I have lived in Turkey with a rainbow flag. I have lived for 4 years in this city but I did not have such an experience by pouring into streets hand in hand with LGBT family without feeling frightened in order to say that we do exist, see us, do not disturb us. And even, some people supported us.

I have always wished to attend in Pride parade but it was usually in Istanbul and the police did not let us leave our city, or at least it was so hard to get the permission. Fortunately, my Turkish friend helped me to get the permission to go to Istanbul, although it was so difficult. In Istanbul, it was Pride parade week and I was there. Maybe for some people it is a tiny wish but for me it was a big one and I can say that it was my best week in Turkey, a week assigned to the LGBTs in which lots of them from all over Turkey gathered together in Istanbul. Although Turkish government banned the parade, the LGBT campaigners did their best to hold it, from galleries and workshops about homosexuality to our own parties. Under this condition that the government does not support LGBT activists, the tenacity of my friends impressed me. Finally, came Pride day, everywhere including Taksim Square and Istiklal Street were full of police forces, however our friends were there. Finally, police let us enter a small alley to gather together and hold the parade. Although they banned the parade, the gathering of such a mass of LGBTs shouting slogans and singing songs was a very magnificent feeling. The police blockaded allay and around one hour later started to alert people to leave there. Time was low but it was good and I wish one day I could experience it once more without feeling frightened in a day that belongs to us and is our celebration.