Azerbaijan: Dying to Be Heard

A gay activist’s suicide shines a rare spotlight on the difficult lives of sexual minorities in Azerbaijan.

A gay activist’s suicide shines a rare spotlight on the difficult lives of sexual minorities in Azerbaijan.

“I am leaving you. This country and this world are not for me. I am going away to be happy now.” So wrote Isa Shahmarli, one of Azerbaijan’s most public gay rights defenders – one of its only public gay rights defenders – on his Facebook page before he committed suicide 22 January in his Baku apartment. In life, the 20-year-old Shahmarli was the chairman of Azad (Free) LGBT, the first group in the country to encourage lesbian, gay, bisexual, and transgendered Azerbaijanis to openly acknowledge their orientation and agitate for their rights. In death, he has sparked a burst of online discussion about sexual minorities, rare in a country where homosexuality remains firmly in the closet. “It is unlikely that Isa Shahmarli’s suicide would have caused a fuss if he was not homosexual but a normal guy,” journalist Vugar Mammadov wrote in a column for news site Vzglyad.az. “The word ‘normal’ here is inappropriate, because Isa was a normal guy. I wanted to say, ‘If he was ‘heterosexual,’ but we do not use such complex phrases.”

Mammadov went on to assert that “the majority of our people are homophobes.” Shahmarli appeared to endorse that view in his online suicide note, attributing his decision to kill himself to “everyone.” “Tell my mother I loved her very much. I blame you all for my death,” he wrote. “This world is not colorful enough for my colors. Farewell.” After posting these words, according to news reports, he hanged himself with a rainbow flag, the symbol of the global LGBT movement. Though Azerbaijan is often viewed as relatively secular and liberal among Muslim countries, homosexuality remains deeply in the shadows. It was decriminalized in 2001, as a condition of Azerbaijan joining the Council of Europe, but beyond that the government has done little to recognize sexual minorities or address discrimination against them. There are no formally registered organizations advocating for the rights and interests of LGBT people, who the country’s few openly gay advocates say usually keep their sexual identity secret. 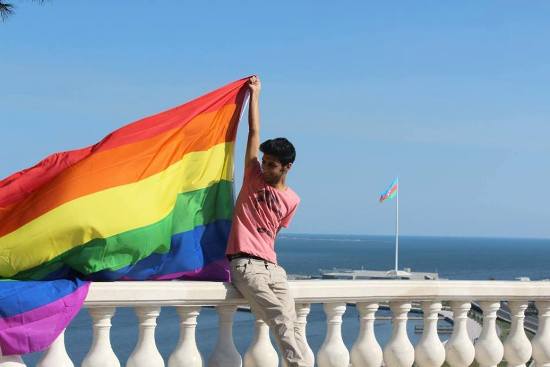 Shahmarli came out to his family and friends several years ago. In an interview in October with online magazine 1937.az, he said his family did not want to accept his sexuality. “Though psychologists explained everything to them, they still view it as an illness,” he said, adding that family pressure leads many LGBT people to commit suicide. In the interview, Shahmarli said he publicly took up the gay-rights cause while attending the Azerbaijan Pedagogical University, after suffering humiliation by his teachers and beatings from classmates. “In the days to come I put on different accessories, I walked through the halls of the university wearing earrings and colorful clothes,” he said. “People around me swore and insulted me, but later most of them were ashamed of their actions. It wasn’t so difficult. Most of the girls wished for a gay friend.” Shahmarli left school in his third year, saying he had become embroiled in so many conflicts over his homosexuality that he lost interest in his classes and was expelled for non-attendance... His focus turned to another kind of education: he launched Free LGBT in November 2011 in the belief that if Azerbaijanis had more information about LGBT people, they wouldn’t hate them. The organization prepared brochures and other publications to enlighten people about sexual minorities and collaborated with psychologists on a documentary film.

He acknowledged, though, that the LGBT movement in Azerbaijan could not move so fast. Most of the country’s sexual minorities feared coming out, let alone campaigning for equal rights, he told alternative news site Meydan TV in an interview the day before his suicide. “Now is not the time to advocate for a law allowing same-sex marriage in Azerbaijan, because our LGBTs are not bold yet. They can’t openly admit their status,” he said. “Even if such a law were adopted, I can’t imagine that they would use it and get married. Most LGBTs themselves do nothing to struggle for their rights.” Shahmarli’s death has galvanized the country’s gay-rights community, which declared 22 January “LGBT Pride Day.” “Isa Shahmarli was fighting against discrimination in our society. He didn’t hang himself, society’s hatred hanged him,” LGBT group Nefes (Breath) said in a statement. “We call for all humane people to continue the fight against hatred together.” Five days later, leaders of the LGBT community held a news conference for the first time, launching a petition drive in support of a hotline for lesbian, gay, bisexual, and transgendered Azerbaijanis.

“This is an SOS situation,” said Javid Nabiev, the chairman of Nefes. “Many LGBTs fell into depression after Shahmarli’s suicide. They need psychological support, since they can’t express their suffering at home and rely on family support.” Homosexuality is still widely seen as something shameful in Azerbaijani society, and LGBT people often face violence within their families, usually from fathers or brothers, and coercion to marry, according to the German Heinrich Boll Foundation. In a 2010 report on Azerbaijani attitudes toward sexual minorities, the Danish Institute for Human Rights said lesbians and bisexual women face “double discrimination” in a society where females are expected to strictly obey their parents, enter into traditional marriages, and have children. In 2010, members of the Azerbaijani delegation to the Parliamentary Assembly of the Council of Europe, a human rights body, boycotted debates about anti-gay discrimination and same-sex marriage, saying the discussion was “unacceptable” for Azerbaijan and the country would not “copy everything that is adopted in Europe.”

Azerbaijani law does not recognize hate crimes or hate speech as legal concepts, and no data on violence against LGBT people per se have been collected. The Danish Institute report includes numerous accounts of people being subjected to verbal and physical violence due to their real or perceived sexual orientation. Despite this environment, a handful of groups operate with varying degrees of openness to support LGBT rights and offer psychological support within the community. None is registered with the government, which makes fund raising difficult. Shahmarli told 1937.az that Free LGBT applied to the Justice Ministry for recognition but was turned down. “We don’t feel any pressure on our organization from state bodies. They just don’t take us seriously,” he said. Nabiev, of Nefes, said gay Azerbaijanis suffer police harassment that can take many forms, from intimidation and invasion of privacy to beatings and blackmail. “LGBTs are forced to cooperate with police. They have to pay 150 to 200 manats [$191 to $255] every month to police,” he said. “If they don’t, they can be blackmailed with the threat to tell their families, or even charged with drug possession. But if you agree to cooperate, they might be your bodyguards.” He said three transgendered Azerbaijanis were jailed last fall on possession charges “without any investigation,” and activists have not been able to determine their fate.

A week before Shahmarli’s death, Nefes issued an appeal to the Interior Ministry, complaining that law-enforcement agencies “are indifferent about the sexual minorities” and those who violate the rights for LGBT people “are left without punishment.” Ministry spokesman Ehsan Zahidov denied the accusation, telling Haqqin.az, a website associated with the civil association For Human Rights, that Azerbaijani police protect the constitutional rights and freedoms of all citizens regardless of “country, race, nationality, religion, language, sex, origin, property, and official status, conviction, affiliation with political parties, trade unions, and other social organizations..” Azerbaijan’s anti-discrimination law and other legislation set out a “general principle of equality” but do not specifically extend it to sexual orientation and gender identity, according to another Danish Institute of Human Rights study, of legal issues regarding sexual minorities. “There are no national policies on LGBT rights and also no specific institutions focusing on combating discrimination on grounds of sexual orientation and gender identity,” the institute said.

Ruslan Balukhin, a 22-year-old activist and the founder of Gay.az, a website that describes itself as “the first information and educational resource for the LGBT citizens of Azerbaijan,” said the only true defense against anti-gay discrimination are the trappings of wealth and power. “If you have money and are well-connected, nobody will dare to openly criticize you, whether gay or straight,” he said. “But a connection with the corrupt and autocratic oligarchy is the only way to be protected from discrimination and harassment.” Workplace discrimination is also a major problem for LGBT people, according to Nefes, which recently completed a survey on the treatment of sexual minorities on the job. Most of the 500 respondents from eight regions were young (aged 18 to 35) and well-educated. Many said they viewed homosexuality as an illness or a matter of personal choice rather than innate. Three-quarters said they would have a negative attitude toward LGBT colleagues at work, and 60 percent said that if they were in a position of professional authority they would not hire a homosexual, bisexual, or transgendered person.

Nabiev, who trained as an IT programmer at the Azerbaijan State Oil Academy, has been unemployed for eight months and conducted his own experiment when applying for a job recently. “I sent two CVs. One mentioned that I was the leader of an LGBT organization. Another was sent under a pseudonym and did not mention my sexual orientation,” he said. “My CV was declined, while the fake person was called for interview.” Even Shahmarli acknowledged, in an interview with web-TV station Kanal 13 shortly before his death, that he kept his sexual orientation to himself at his marketing job. “If they know that I am homosexual, there is a risk that I’d be fired. But I spend part of my salary on LGBT advocacy,” he said. While Shahmarli’s death was covered as a news story by mainstream media, it passed without notice from politicians, clerics, and other public figures, reflecting their typical silence on homosexuality and gay rights. On Facebook, Twitter, and alternative online media, though, there has been a great deal of comment from young Azerbaijanis, divided between messages of tolerance and tradition – some of the latter crossing into threats.

“It’s good that he hanged himself. Otherwise someone would have killed him,” one poster wrote. Another said the traditional Muslim benediction for the dead - Allah rahmat elesin in Azeri, or “God rest your soul” - “may not be said to [Shahmarli]. He should burn.” Haqqin.az reported on 24 January that Shahmarli’s grave had been trampled and the rainbow flag and flowers covering it taken. But there were also pleas for a change of mind and heart. Nigar Fatali, a blogger and youth activist, invoked both the short-lived, pre-Soviet Azerbaijani republic and the country’s contemporary image as more open and tolerant than its neighbors in eulogizing Shahmarli at Meydan TV. “Many of you will argue that we are not as bad as Russia, or the Middle East, but I will argue back that we are not good enough, either. And until we do something about homophobia in our society, it will never go away,” Fatali wrote. “The last time we made use of being free, rich, and comfortable, we created the first opera in the East, built the first school for girls, and established the first democracy in the Muslim world. Now it is time to champion other things that truly matter, like tolerance, understanding, and acceptance.”