We shall never give up believing in ourselves and lose hope. I am quite sure that one day LGBT struggle will end with victory.

Remarks delivered by Yasemin Öz, Felipa de Souza Honoree
May 13, 2013
Hello dear friends,
I am honored to receive IGLHRC’s very special award in the name of Felipa de Souza. I am also honored to join you and celebrate this award with you. I am quite aware of the amazing work IGLHRC is doing all around the world. First of all, I would like to thank IGLHRC not only for this award but for everything they do to promote LGBT rights.
Yet, I don’t think that I deserve this award more than any other LGBT activist. But I do believe that LGBT activism is something that should be awarded since it is a hard way to go due to discrimination and violence. So I will take this award on behalf of every LGBT activist all over the world who gives me strength, courage and hope. I hope this award breaks once again the invisibility of lesbians in Turkey.
This award is also something important for me on the other hand. My sexual orientation seemed to me like a curse before I met the LGBT movement. I would like to share with you how this “curse” turned to an award.
I was 6 years old when I first noticed I was “different”. When I was 11, I was quite sure about my “differency” and was afraid of it. I was thinking that it was something about being a child and when I grew up it would disappear. Years passed, I have grown up but my “differency” didn’t disappear. I was in panic in those years. It was impossible for me to accept my sexual orientation. There was nobody to talk with, nothing to read. I didn’t know even a word to define myself. I was just waiting for my feelings for women to end one day and wake up as a heterosexual! Well, it didn’t happen.
Those years, although I was behaving like a “normal” lesbian, many people treated me like there was something wrong with me. So I believed that there was something wrong with me. I tried many ways to get rid of my sexual orientation, even forced myself to date boys. But nothing changed in me; my life became worse and worse. The only thing I could do was read more and more to understand myself. I read religious, mystic and psychological books to find an answer but none was enough for me. 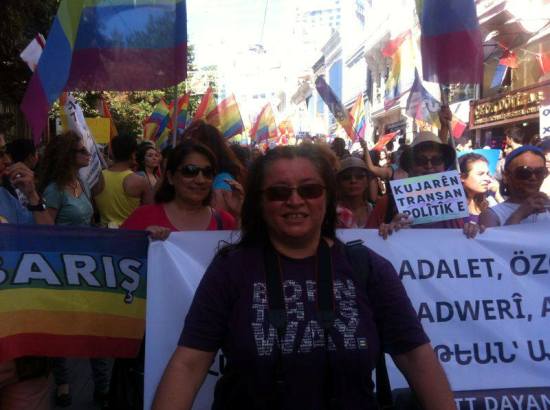 One day I heard about the Kaos GL magazine and group which were publishing the first LGBT magazine in Turkey. I was quite shocked. It was 1995, I could never imagine a group of people revealing they were gay and writing about it. They were so much braver than I could ever imagine. So the first time I went to the Kaos GL meeting with confusion about my sexual orientation in my mind.
In the meeting I met a small group of people; many of them were gay men. They were quite sure about their sexual orientation and they didn’t have any problem with it! At the next Kaos GL meeting, I was also quite sure about my sexual orientation. It was the first time that I could understand and accept my sexual orientation.
While ending my speech, I would like to dedicate this award to victims of homophobia and transphobia, to IGLHRC, to Kaos GL, to my family, to my best friends Erdem Çalışır and Zehra Tosun who changed my life forever and especially to Pınar Selek who received a life sentence because she never gave up her beliefs.
We shall never give up believing in ourselves and lose hope. I am quite sure that one day LGBT struggle will end with victory. Cheers to all LGBT activists.