The political power of actions that were born from the dreams can defeat all means of hegemony and oppression. 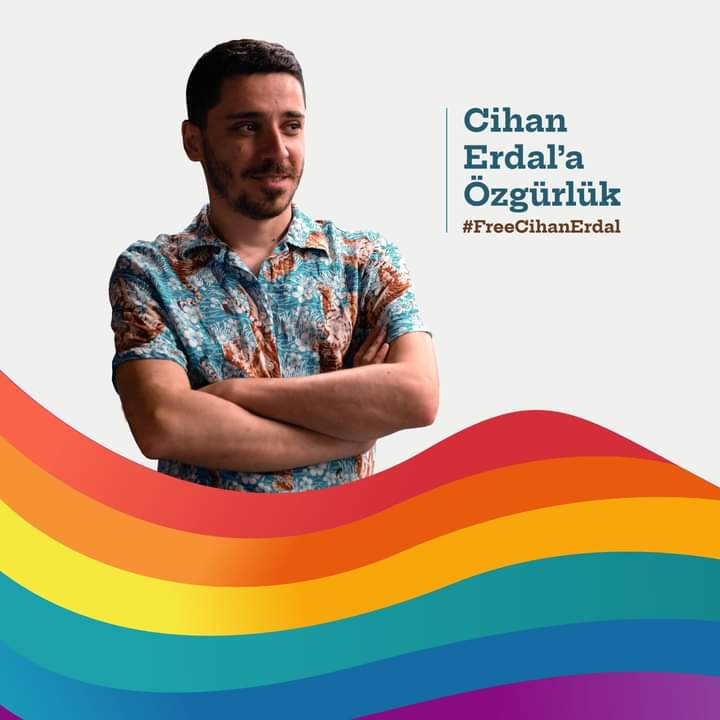 During this trial, it is necessary to stand in solidarity against this hostility by remembering our past and dreams. Not because we're friends, we're acquaintances, we're comrades. Friendships end, paths get separated, distances come between. But the memory of those who dream and act together does not stay as a mere memory. The political power of actions that were born from the dreams can defeat all means of hegemony and oppression.

I'd like to tell you about an old friend of mine in this column this week. Some of you may have heard of Cihan Erdal from the press. I usually do not attribute political importance to friendship or write an article on friendship. However with the operation against the Peoples' Democratic Party (HDP), with central committee members of HDP under arrest and the closure case against the HDP; looking at who is being tried, why and on what grounds becomes necessary in order to be able to voice the fact that "these doings are unlawful", which we all clearly see.

As you all know, the second hearing of the Kobanî Trial, in which 108 politicians, including 28 detained politicians, are being tried, is taking place in a festive atmosphere. The mistranslation of the European Court of Human Rights's (ECHR) "release" verdict on Selahattin Demirtas, not conducting the detainment investigation of the politicians despite the requests of lawyers and not admitting the journalists without turquoise press cards to the courtroom…

Figen Yüksekdağ and Selahattin Demirtaş, the co-chairs of HDP and former DBP Co-Chairperson Sebahat Tuncel were heard at today's hearing. Those who monitor the trials through the press read about what happened at the trial, which Demirtaş described as a "revenge case", through Demirtaş's speech. I think it is important to look at the statements of Yüksekdağ and Tuncel before moving on to Cihan, who couldn't plead today. Because both female politicians have clearly stated what the trials aiming politically, rather than the unlawfulness of the litigation process.

Let's start with Sebahat Tuncel. Sebahat Tuncel's importance and actions for the LGBTI+ movement are obvious. Apart from being one of the first politicians to voice LGBTI+ rights in parliament during her time as deputy; Tuncel is a politician who speaks out loudly about LGBTI+ rights in all political activities and does not tolerate the positions that are anti-LGBTI+ or "timid" towards the LGBTI+ rightson political parties and platforms where she partakes. Tuncel, who has been tried countless times and spent a significant part of her life in prison, told the court today:

“We, as Kurdish women politicians, have been exposed to this once again in this hall. Shutting us off without hearing what we say, using power, the superiority of technology over us is not just any approach, it is actually a show of power, a show of masculinity. The court actually said, "I call the shots." You brought in the leaders of a political party that got that 6 million votes. You can't even bear to listen. You didn't let my fellow defenders speak, you left us defenseless.We are not surprised as we already know that very cells of this state are permeated with masculinity."

I am sure that these sentences of Tuncel, who exposes the patriarchy on the sight and challenges it, reveal a relationship of hegemony that LGBTI+ people who read this article can very easily understand.

"We are not facing a fair trial. This is the main justification for our request for a new judge. The facts are being distorted here. This process cannot be carried out on distorted facts. I've made thousands of defenses over four and a half years. The content is being put back in front of me in their further edited forms. Through all the litigation processes, we didn't see our arguments as an accountability process. We are exposing the truth here."

I think the essence of the matter lies in these sentences. When I interviewed her as part of the "That Form of Politics" case before her election as an MP in 2015, she said:

"There comes a time for lesbian, gay, bisexual and transgenders have to and must fight politically. We too should make this issue directly the subject of politics. It's not enough to defend LGBTI freedom everywhere. We need to produce more centralized and macro actions and responses when a trans gets slaughtered somewhere or direct attacks come from the government."

Direct attacks from the Government, which Yüksekdağ mentioned in the interview, have turned into a public declaration of war when it comes to LGBTI+s. There is perhaps no need to explain it at length in this article, but a few months after this interview, the police attack on the Istanbul LGBTI+ Pride March once again revealed the truth of "There is a civil war based on homophobia", another prediction of Yüksekdağ. She made these remarks at her party's 'LGBTI Workshop for a New Life'. I can't forget how excited I was when I heard her words. I have witnessed these sentences from her before. But that clarity, in a public space, was crucial. At the same workshop, Cihan Erdal was also a speaker and said, "We need a party like the life we want"

Let's take it to Cihan. A footnote for those who think I've taken the issue too far: The article is getting longer as we need a summary to explain how the current trials are also closely related to LGBTI+ struggle for equality and freedom. Because I observe that post-2015 forgets the planes of political struggle that were built before 2015. It's worth remembering and and making others remember. Because, as I heard from a Polish activist and never forgot, "hope is like a muscle, it is necessary to work it regularly".

Now let's talk about Cihan... My acquaintance with Cihan goes back to way before 2015. I met Cihan when I was a member of the central executive committee of the Peoples' Democratic Congress. He believed in change, to fight together, so much that he was able to convince even a pessimist like me. Cihan also served two consecutive terms as a member of the HDP's Party Assembly and central executive committee. For many years, we also took part in the Peoples' Democratic Congress (HDK) and the HDP's LGBTI commissions together. Cihan is also one of the founders of the LGBTI Peace Initiative.

With my first steps into journalism, the axis of our comradeship with Cihan changed. I was asking questions now, and I remember in our interviews how I pressed Cihan on the HDP's work in the field of LGBTI+ rights,  we went back to normal after the recording was over.

In our pre-election interview in February 2015, Cihan explained the HDP's approaches to LGBTI rights as follows:

"On the LGBTI issue, we think that the fight against heterosexism cannot be separated from the struggle against capitalism and all other sources of inequality. The HDP is a party aimed at eliminating discrimination based on homophobia and transphobia. On the other hand, we have a "New Life" policy that we propose in general. We say that this policy and proposal is equally valid and necessary for Kurds, for trans people and for homosexuals. We cannot solve the intertwined and complex identity, social and ecological problems with answers that isolate all these problem areas from each other. There's no new life there."

When I knocked on his door again after the HDP's success in the June 2015 election, "A political party that openly advocates for LGBTI rights, proposes LGBTI equality and freedom in great detail under a separate title in its electoral program, and declares this everywhere, has increased its vote and crossed the threshold” he said.

The things that happened after are sort of a downhill drift... Attack on the Pride Parade, Suruç, October 10, bombings, state of emergency, bans on LGBTI+ events in Ankara, the normalization of the state of emergency, the hostility against LGBTI+ that has reached to new peaks during the pandemic... Anything and everything...

The political line that this downhill drift is trying to destroy is exactly what the three politicians above are saying. It is hidden in the sentences of Sebahat Tuncel, Figen Yüksekdağ and Cihan Erdal. This case is one of the last steps in this destruction policy.

Cihan has been imprisoned for months, with other HDP politicians.The possibility of him being subjected to a different kind of discrimination in prison was a fear that gnawed at me from day one. As far as I know, it didn't happen, but isn't the queerhood partly a fear of not being equal in prison? For yourself and your friends.

Cihan, a PhD student at Carleton University in Canada, was detained on September 25, 2020, and arrested on October 2, 2020, in Istanbul, where he came for his thesis research. While in custody, Dara Demiralp wanted to interview Cihan in order to publish it on bianet. However, the questions never reached Cihan. Why? Let's quote Bianet on that:

Dara Demiralp has noted that the introduction part of the letter was given to Erdal, while the part containing the interview questions was omitted. According to Demiralp, the reason behind this incident might be the questions about the LGBTIQ+ movement:

"Turning every person and every group that it sees as the 'other' into a target, the government is now targeting the LGBTIQ+ movement with the hate speech it has recently spread. In addition to your different identities, how would you describe this process as an LGBTIQ+ prisoner?

"The letter that I sent coincided with the period when Melih Bulu was appointed as a trustee-rector to Boğaziçi University. In an attempt to delegitimize the resistance of students at Boğaziçi University in that period, the government spread hate speech about the LGBTIQ+ movement and turned it into a target. That must be why they censored Cihan Erdal."

During this trial, it is necessary to stand in solidarity against this hostility by remembering our past and dreams. Not because we're friends, we're acquaintances, we're comrades. Friendships end, paths get separated, distances come between. But the memory of those who dream and act together does not stay as a mere memory. The political power of actions that were born from the dreams can defeat all means of hegemony and oppression.

I believe that. I hope that I can share these dreams of mine with Cihan after the end of this trial. Look, Cihan, the annoyingly pessimistic Yıldız is talking about dreams. It's just like you said in a letter:

“. It was the spirit of Ahparig Hrant Dink who made me believe strongly that it was possible to foster change through truth-telling, the power of the word, and the magic of conscience. During the last four years, when I moved away from active politics in Turkey and focused on my academic studies in Canada, I never abandoned non-violence, peace, and love.

The logic-defying charges against me – with an indictment that was prepared seven years later, especially the allegation that “I acted upon instructions” – is extremely serious spiritual violence.”

"The sharp and ironic contrast between the truth and the accusations is so obvious that our relatives and mostly from different political opinions living in my hometown of Akhisar, intellectuals, academics, students, my university, friends, family, and my spouse, have been giving tremendous support to our quest for justice and struggle from the very first moment, as Hannah Arendt put it, "those in power can engage in all kinds of schemes, but they can neither discover nor invent something valid that can replace the truth." (Between Past and Future, 1996, p.349). All political evils are eventually condemned at the conscience of the public, that is what modern history has taught us."