Now, regardless of whether people supported or opposed the movement, everything in Turkey is conceived in the context of pre- and post-Gezi.

The ‘occupation’ of Taksim Gezi Park in response to the clear-cutting of trees was transformed into a country-wide, anti-government ‘movement’ due to disproportionate police violence. The ‘happening’ went into the annals of republican history as the largest-ever social movement in terms of the number of participants, geographical reach, duration and radicalism.
There might have been a carnival atmosphere in the park, but the streets continued to be the site of violent clashes; in every corner of the country. Solidarity protests were launched around the world.
The movement continued well into the past six months with “neighborhood forums” operating according to the principles of direct democracy, as well as organizing anti-government marches. Now, regardless of whether people supported or opposed the movement, everything in Turkey is conceived in the context of pre- and post-Gezi.
“This is just a beginning, the struggle continues!”
This slogan, which was previously chanted in protests against the sacrifice of urban heritage and public space on the alter of the neo-liberal market, became the motto providing direction to the movement. The evening when the police ‘evacuated’ the park for the second time in mid-June proved to be the beginning of a new phase of the movement, not an end thereto. 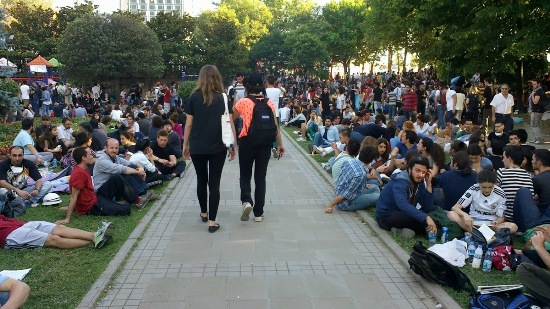