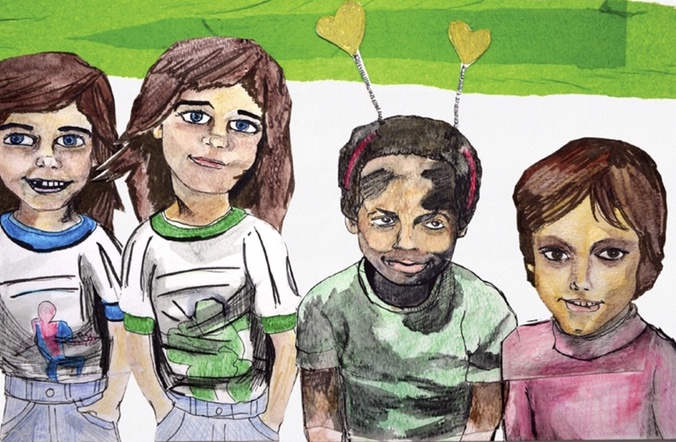 Adolescence is a period of rapid physical, emotional, cognitive and social changes,  independence, sense of identity and social productivity are gained through the separation individualization process. At the same time, it is evaluated as the stage in which social effects  are the most important for the individual in the human developmental periods.

In addition to the rapid changes in adolescence, emotional and sexual changes also occur.  Parts of the adolescent's process of incorporating sexuality into their identity stated as sexual  exploration, research, and experimentation (1). Sexual orientation contains the individual's  patterns of sexual desire, behavior, and emotional attachment to others, and occurs in pre adolescence or early adolescence. Adolescents may gravitate towards one or more genders  on a continual basis, with varying degrees. Definition as heterosexual includes orientation to  the opposite sex, definition as homosexual includes persons of their own sex, and being  bisexual includes orientation to both sexes. Homosexual men are called gay and women are  called lesbian. In fact, sexuality is more complex than these simple definitions by its nature.  Some young people may use other terms, thereby stating that they do not fit in these  definitions and terms (2). Gender identity, on the other hand, is the identification and  expression of which gender one feels. Gender identity awareness develops in early childhood.  It is observed that some children's gender identities and assigned sex do not overlap with  each other, they declare that they feel different genders, and this situation continues during  adolescence. Some adolescents show signs of gender dysphoria during and after the  secondary sex characteristics that occur with puberty. Gender dysphoria is defined as the  discomfort experienced due to the apparent inconsistency between the person's assigned sex  at birth and gender identity (3). Adolescents who identify as gay, lesbian, bisexual, and  transgender have the same health and developmental needs as all other adolescents, and  their sexual orientation and gender identity are part of human sexual diversity.

Although many LGBT adolescents are physically and mentally resilient, they may become a  vulnerable group as a result of encountering many inequalities in family, school, friend relationships and health, which mental health care providers should be aware of. It is known  that they may encounter different developmental difficulties in relation to the perpective and  reactions of the society, environment, family and peers to this diversity and they need  additional physical and mental health support (1). Some adolescents may struggle with sexual  orientation and gender identity discovery and awareness. Adolescents may feel strange,  unfamiliar, alone, anxious and distressed. Sexuality can be limited, suppressed, and  sometimes, sexual intercourse attempts can be seen showing that it is the opposite. Digress  from other developmental issues of adolescence, such as dissociation, individualization,  socialization with peers, preparing for the future, social skills, and self-confidence. They may  express thoughts such as that they will be excluded, that they won’t be loved, that they will not  have a job. However, the stages of tolerating the identity, opening up, and accepting can be  seen in adolescence. Adolescents are subject to marginalization and discrimination due to  their sexual orientation and gender identities, they may suffer oppression by peers and adults  in their family and school circles, they may experience peer bullying, social isolation, verbal  and/or physical violence and abuse. The negative attitude of the environment in this regard  can prevent them from having a healthy ego. Adolescents who know and experience that  differences are evaluated negatively, do not love themselves, criticize, ignore and interiorize  these negative values. It is predictable that these difficulties will cause mental disorders.  Considering important studies, it is reported that the rates of emotional disorders, self-harm  behaviors, sexually transmitted diseases, suicide attempts and substance abuse are high in  LGBT adolescents (4). Therefore, the existence of centers that are clinically competent in the  field of mental health services to provide to adolescents in mentioned group, centers that  follow the current developments in sexual orientation counseling and gender dysphoria is  very important. As mental health workers following the adolescent age group, the adolescent  we come across may be clear and declare about their gender identity and sexual orientation,  may be in the research and discovery phase, may come with some questions regarding this  process, may be questioning and may feel the need to talk about their concerns and  difficulties.

As mental health workers following the adolescent age group, the adolescent we consult  might be clear and declare about their gender identity and sexual orientation, might be in the  searching and discovery phase, might come with some questions regarding this process, might be questioning and might feel the need to talk about their concerns and difficulties.  They may come voluntarily, or they may be directed or even forced by family, school or  another health professional due to non-compliance with gender norms. What mental health  service providers need to do is to show an approach that covers the adolescent as a whole  and affirms adolescent’s self-expression, declaration, questions, queries, and concerns at any  of these different stages (4). The affirmative approach aims to regard being LGBT as a case  related to human diversity, not as a pathology, and to provide a process that can pave the way  for the individual to see themself positively based on acceptance. For adolescents  experiencing gender dysphoria, the definition of this approach has been expanded to include  a comprehensive psychological evaluation before any physical intervention (5). Within the  scope of an inclusive and affirmative approach, the problems in themselves, the difficulties in  life and the issues about self-expression and open up to the surroundings are discussed. At  the same time, if the adolescent's questioning about their orientation and identity continues,  this includes supporting this discovery, helping them develop positive self-identity and  resilience, showing a supportive attitude towards their needs and affirming their life as they  feel. It is important that the adolescent knows that whatever their thoughts, questions, fears  and experiences are, they will be accepted by the interviewee and that they are allowed to ask  the questions they want without feeling guilty. The inclusive and affirmative approach  includes providing a health service that establishes a positive relationship with young people  and their families, with uncritical open communication in the main process where health care  is provided. Written materials and rainbow-themed images about sexual orientation, gender  identity, support groups and community resources in the waiting room and/or meeting rooms  will be a sign that these issues are open to discussion (4). The health care principles  underlying LGBT youth-friendly services were determined as the presence of professionals  who have experience working with these adolescents, being easily accessible, accepting, and  having the principles of equality/fairness (3). Competence, acceptance and respect, effective  communication skills, and attention to privacy and confidentiality are the basics of high quality care. Adolescents who express their difficulties and contradictions in an environment  where they are not judged feel more accepted. Adolescents who express their difficulties and  contradictions in an environment where they are not judged feel more accepted. Showing  acceptance and empathy with sincerity and consistency to the characteristics that the  adolescent hides and embarrassed has therapeutic value in itself. Therefore, it should be clearly stated that mental health service providers will handle applications made within the  scope of sexual orientation and gender identity in the light of current scientific information  and with respect for human rights, that this diversity is not considered as a mental health  disorder that requires treatment, and that attempts to repair or transform may harm the  person. The resources to be used, prepared in the light of current scientific data, are the  clinical practice guides of certain occupational groups in a structure that also considers the  cooperation between different disciplines. The primary among these are the American  Academy of Child and Adolescent Psychiatry (AACAP) (6), the American Psychological  Association (APA) (7,8) which translated into Turkish, the World Association of Transgender  Health Professionals (WPATH) 7th version of Standards of Care (9) and the Endocrine Society.  (10). Their contents cover important topics related to social, psychological, hormonal,  psychiatric and all other fields of intervention.

In the evaluation of LGBT adolescents, age-appropriate history listening, examination, detailed  examination of the general psychological functioning status, which are generally  recommended for all adolescents, should be included, and support, guidance and counseling  should be provided covering the need for application. The affirmative approach involves a  careful evaluation and examination of each case in its unique way, regarding sexual  orientation and gender identity, family dynamics, and overall psychological state. The level of  knowledge and inner conceptualizations of adolescent about the concept of gender, the  developmental stages of gender identity and expression, the quality of relationships in family/ school/friend environments, resilience, coping skills, social support systems and future  expectations are included in this evaluation. In this context, the risks of peer bullying, family  rejection, internalized homophobia and transphobia and abuse should be questioned. In the  meantime, appropriate screening for potential medical and psychosocial threats (especially  evaluation of depression, suicidality, anxiety and self-harm) should be performed to the  health of LGBT adolescents and appropriate guidance processes should be initiated if  necessary. In the interview with the adolescent, the level of knowledge and reactions of the  family towards the situation and parental attitudes are also evaluated. Since it would not be  appropriate to think adolescent independent of school and family system which they live in,  planning for home and school life should also be brought to the agenda during the evaluation  and follow-up processes. In the content of family interviews, issues such as parents' understanding, acceptance, knowledge about the gender identity, handling of risks, individual  or family support needs, and the structure of the adolescent-parent relationship are  evaluated. It is important to listen the history of gender identification and expression and to  monitor ongoing identity discovery and development in trans adolescents. Trans adolescents  and their families should be informed and supported about gender role and current medical  interventions within the scope of current approaches to gender dysphoria. In the follow-up  process, a process should be planned according to the help and expectations that the  adolescent and their family want to receive. This follow-up process is tailored to the  adolescent and their needs. It is important to accompany the adolescent with an inclusive and  positive perspective, and to provide the information that the adolescent needs in terms of  self-knowledge, definition and positive acceptance. Their expectations, concerns and goals for  the future are the topics discussed during the monitoring process (2-8). Follow-up may include  psychotherapy with a professional trained in gender identity and sexual orientation to reduce  distress associated with any psychosocial difficulties. This therapy process may include  identity discovery and development, the process of coming out and appropriate strategies,  strengthening and supporting coping skills, as well as helping adolescents and families  manage the uncertainty and anxiety they experience. In addition to informing and supporting  family members within the scope of mental health service, directing them to appropriate  resources (listag.org, galader.org) to connect with the others likes of on gender diversity is  another important element of an inclusive and affirmative approach.

As a result, an inclusive and affirmative mental health approach to LGBT adolescents; should  include a process that follows researches and updated guidelines in the field, providing the  most proper care with attentive and careful according to the needs of the adolescent and  their family, allowing and caring the exploration of gender expression without assumption or  criticism, supporting the adolescent in terms of self-knowledge, understanding and identity  integrity.