Pride with a bit of a concern!: Observations from Belgian National Pride Rally

It is important to forge internationalist solidarity networks among LGBTI+ campaigners with a pro-refugee and pro-immigrant perspective.

On Saturday, May the 19th, over a hundred thousand people and around 70 delegates from different cities of Belgium, nearby countries such as Germany, France and the Netherlands flocked into Brussels to participate in the national pride march.

Participant organizations drew everyone’s attention to this year’s theme “Your Local Power” during the official inauguration reception in Belgian Royal Library. Çavaria, Arc-en-Ciel Wallonie and Rainbow House Brussels, the three Belgian rainbow organisations, stated that local politicians could make a difference and whoever gets behind the wheels after October 2018 elections would hold the chance to introduce an integrated LGBTI+ politics. Therefore, they called for the running candidates “to consider their communities” in their policies. 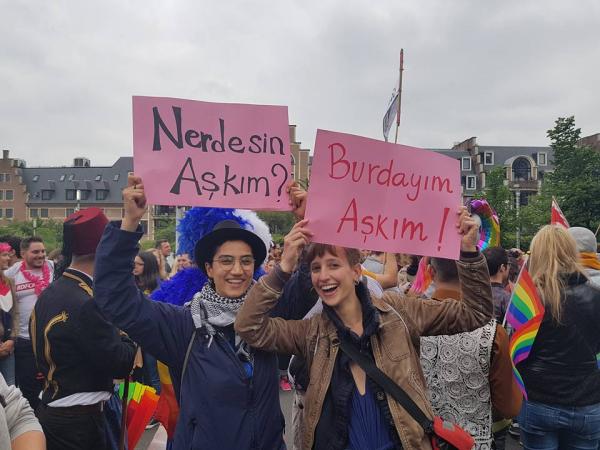 As an active member of the LGBTI+ struggle in Turkey for over 10 years, I will always remember my first pride march abroad with excitement. While writing a couple of Turkish slogans on placards during preparations for the march, I was sure that Turkish speaking community among the crowd would respond back to the famous Turkish pride slogan “Where are you my love?” [Nerdesin aşkım?] with the “Right here, darling!” [Burdayım aşkım!]. I am happy to have had the opportunity to experience an atmosphere of freedom, which gave me a sense of relief from the long-lasting oppression and LGBTI+ rights violations in Turkey. With tens of thousands, I was filled with pride without a scant of fear. 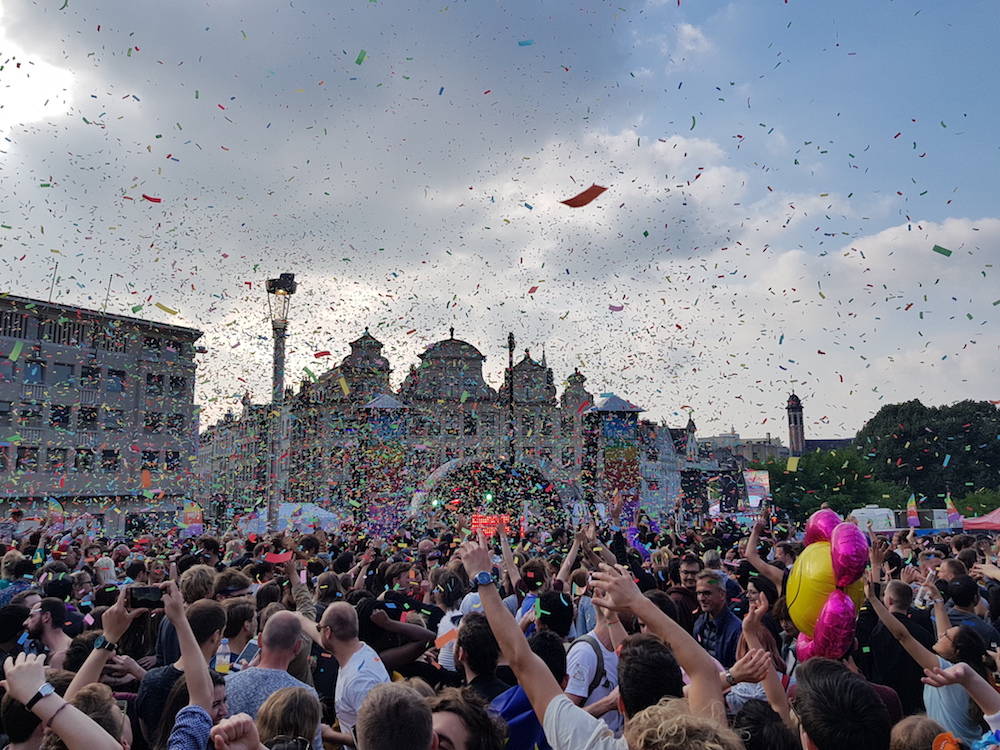 70 delegates mentioned above included members of Hello Bank, Belgian Motors Sports Club, D-Club Party, Velvet 69 (A women-exclusive special party organisation) as well as rainbow cops and conservative and racist Belgian party NV-A members (New Flemish Alliance). Those who protested participation of homonationalist NV-A in the rally were subjected to violence and taken under custody by the Belgian police. Some LGBTI+ organisations refused to join the march arguing that capitalist and fascist organisations should not have been given room. Unfortunately, the activists who wanted to show that pride march is a continuation of the rebellious struggles of LGBTI+ people rather than depoliticized entertainment party were responded with police violence and human rights abuse. For homonationalist NV-A, LGBTI+ community has all the civil rights necessary for equality in Belgium. They hold that the only problem for the LGBTI+ community is the presence of Muslim migrants in the country. They perceive Muslims as a threat to their freedom and cannot even imagine there could be Muslim LGBTI+ people as well. 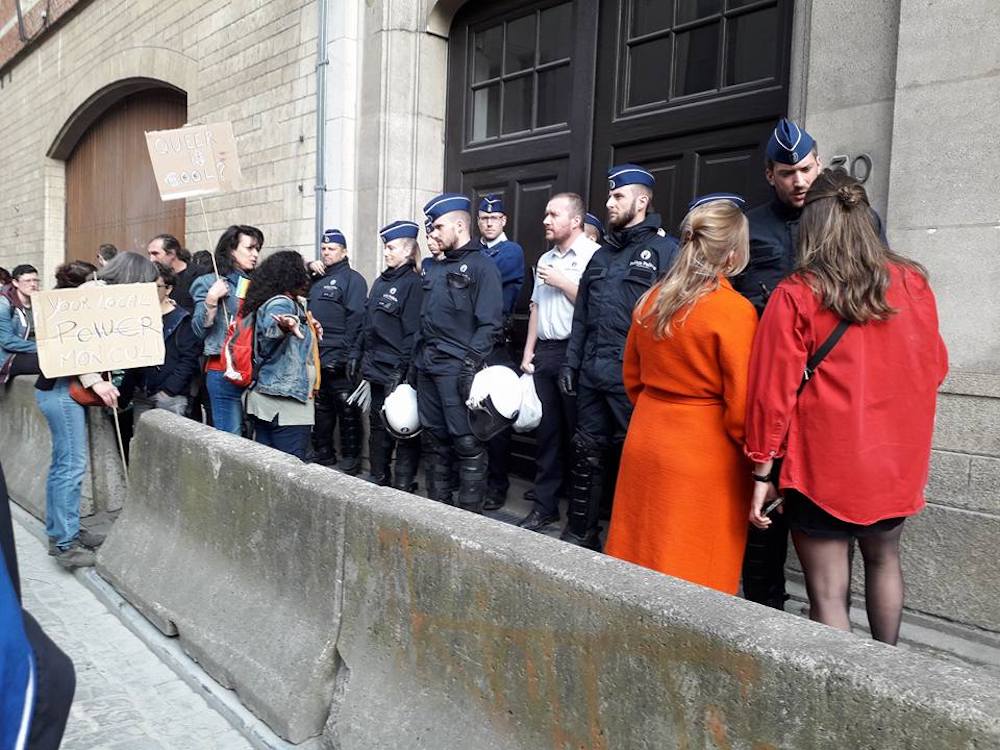 However, there is one more point that I feel needs to be addressed. Homosexual refugee communities in the march were basically male-dominant. The invisibility of women members of the gays and transgender refugees is a problem and these groups should strive hard to encourage lesbian and trans participation. 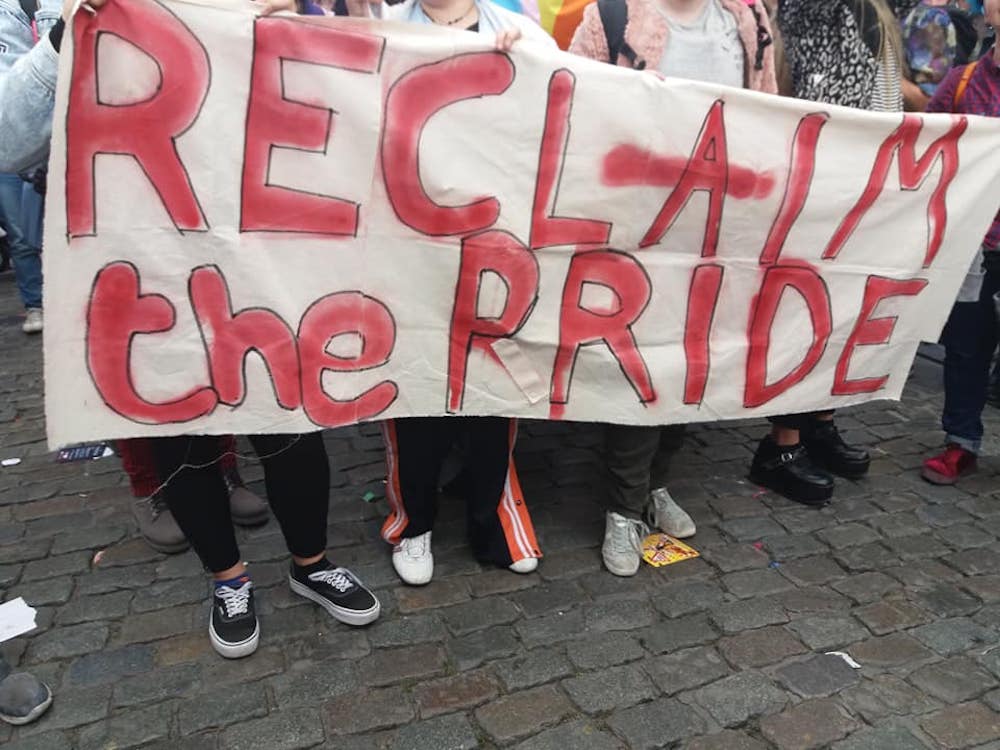 Having seen that rising fascist parties and their Islamophobic LGBTI+ friendly rhetoric, I believe it is important to forge internationalist solidarity networks among LGBTI+ campaigners with a pro-refugee and pro-immigrant perspective.

*Homonationalist: It is a political positioning in favour of LGBTI+ rights with a nationalistic framework, represented by Jasbir K. Puar since 2007 to legitimize Islamophobic and anti-immigrant views. Their central argument is that immigrants are homophobic while western societies are egalitarian. This way, LGBTI+ rights advocacy is increasingly instrumentalized by far-right parties to maintain anti-refugee and anti-migrant political stance.