The Mysterious HOT DAYS of Albania...

With the tactic of conservative and rightist Berisha, Albania became one of the few European countries addressing not only sexual orientation but also gender identity as grounds of discrimination.

Albania is probably that unique and strange country, where the LGBT activism became visible, not because the activists wanted, fought and asked for it, but because the most conservative and probably the most corrupted Prime Minister ever in this tiny poor country during these last 25 years, somehow, forced it…!
It was just some days after the general elections of 2009 when Sali Berisha (conservative, right wings and “just officially” anti-communist), in his second term as Prime Minister was dealing with the accusations for electoral fraud, coming from the left wing opposition. 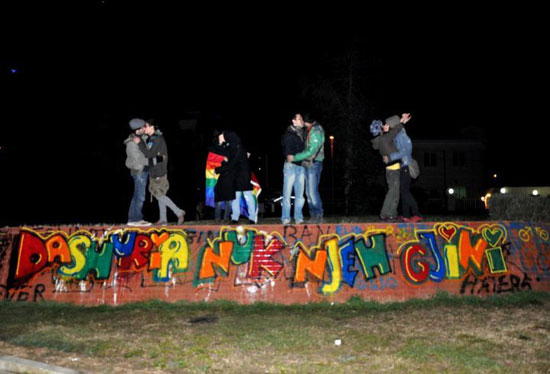 After a graffiti done by the Alliance against Discrimination at the center of Tirana, meaning: Love knows no gender...
It was summer…
A time when Tirana was “suffering from God” who was bringing hot temperatures and from Edi Rama (leader of the opposition) who was articulating severe political accusations against Berisha, the only ex anti-communist leader of Eastern Europe, who is still in power more than 20 years after the fall of the Wall of Berlin! (All the others have either declined from politics, or lost the elections…).
Berisha decided during those “hot days” to create another “stage”, most probably to canalize the public debate, from the fraud of elections, into a social bomb: let’s talk about homosexuality! 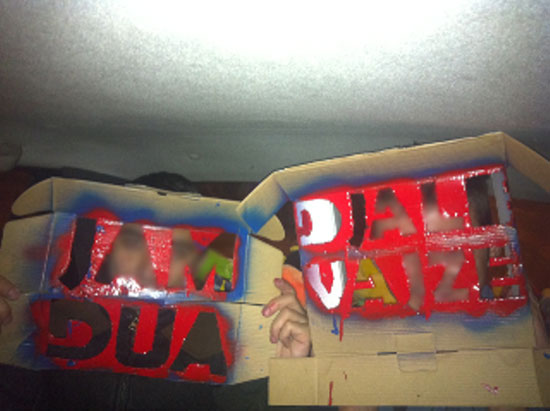 Activists from Pro LGBT holding their graffiti tools, before an action
He invented his own debate when he said, in front of the cameras during a meeting of the government that he was “in favor of a same sex marriage law in Albania!”
Meanwhile, a group of young girls and boys were organizing themselves in Facebook. The famous declaration of Berisha took them in surprise! I remember when I sent an email to Xheni, who is now an outstanding leader of LGBT movement in Albania, asking her to meet each other. We met in a quite bar in the center of Tirana, when suddenly we both saw at a TV screen some strange titles: “The Catholic Church is strongly opposing the argument of the Prime Minister to legalize the same sex marriage in Albania”. You can imagine how excited we were! Within just 10 minutes we decided to send to every known journalist, an email coming from “The LGBT Activists in Albania”. We sent that email, and we even sent SMS to the editors of TV and printed media. Our genuine reaction was published immediately and that was probably the first occasion when few non-experienced young activists tried to speak out…
Many things have rapidly changed from that moment. We participated in the process of drafting that same year, the anti-discrimination draft law in Albania. It was passed and entered into force mentioning from its first article as a ground of discrimination also the sexual orientation and gender identity, making Albania one of the fewest and earliest European countries to define gender identity as a ground for discrimination.
We worked together to empower that young emerging LGBT community, especially in Tirana… We knew nothing how to deal with that challenge, and until a certain moment we kept fighting without any concrete help, but just with the strong encouragement of few, very few foreigners living in Tirana, like the lesbian couple Mindy Michels and Melissa, both Americans (publicly awarded by the Secretary of State Hillary Clinton for their efforts in empowering LGBT activism in Albania).
The anti-discrimination law that was strongly defined with fresh arguments from Mindy and Melissa, Frank Dalton of OSCE, and some other human rights activists (Albanians and foreigners) entered into low soon after Berisha “passed into history” as the “public driver” of a well ongoing, although not well organized and underground genuine LGBT activism…
There was an “explosive debate and discussion that was broken out everywhere” during this period in Albania over the “Klodi case.” Klodi was a young man who expressed his sexual orientation during a Big Brother edition in Albania.
So, (I am quoting international media and foreign blogs): the furor was sparked by an emotional declaration on television by Klodian Çela from Lezha, a contestant in the “Big Brother” house on the Top Channel reality TV program, who announced that he is gay and called for understanding from everybody, especially his mother.
But soon after, demonstrators on the streets of Lezha protested by claiming, “Lezha is clean – we have no homosexuals” and demanded Klodi’s removal from the “Big Brother” house.
The case prompted intense discussion in the national media, as well. 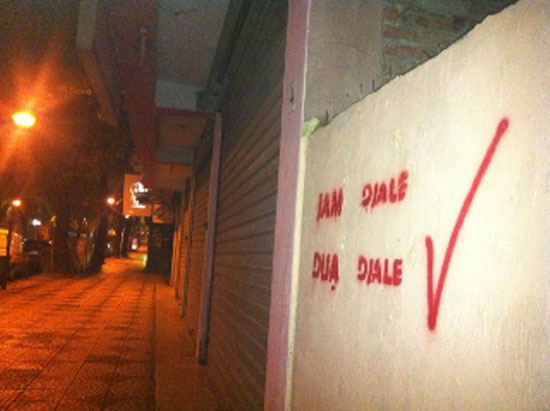 Graffiti's mission well done in the downtown: I am a Boy in love with a Boy... (in front of it was written: I am a Girl, in love with a Girl)
I was interviewed in Korrieri and Shekulli, two mainstream daily newspapers saying: “Whether we like it or not, an important chapter in the history of human rights in Albania will be linked to Klodi’s name. We don’t understand this right now, because of prejudice and decades and centuries of repression, but we are living through some days, weeks and months and no doubt years in which this history will be written.” Asked why Albania is traditionally “allergic” to homosexuality, Albanian activists said that “Albania is less allergic to homosexuality than ill-informed about it. This is because Albania is ill-informed about sexuality in general.”
We went on saying that “We know perfectly well” that homosexual men and women are present throughout Albanian society, and have achieved distinction in every possible field.
Asked what Klodi has gained and what he has lost by his dramatic coming-out on television, the response was: “He has lost nothing. He has gained the right to live in freedom, which is something that the four-million-odd Albanians counted in the last national census have been unable to do”. 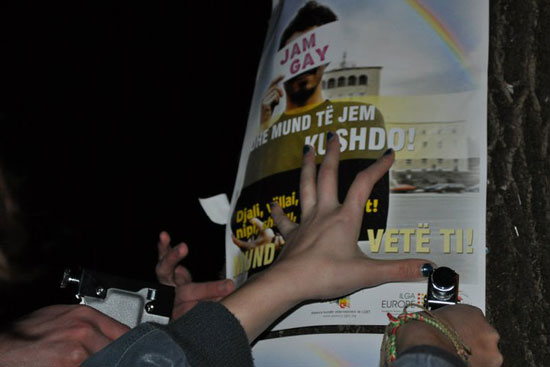 Putting posters in Tirana's streets (meaning I am gay, and I can be everyone around you...). An action of The Alliance against Discrimination
Albanian media also carried an interview with a 48-year-old gay man from Tirana named Erion, who described the life of Albanian homosexuals out of the media spotlight. Erion’s experience spans two eras, the communist past and the last 20 years of a democratic society: "Before the ‘90s, under the communist regime, it was totally terrifying even to think of yourself saying, ‘I am homosexual’, because this earned not just moral disapproval but punishment under the law. You could be sentenced to seven to ten years. You had to keep it secret." Erion saved himself from the communist prisons, but has not saved himself from secrecy, fear, and the discrimination he still encounters in post-communist Albanian society. "Discrimination against homosexuals in Tirana is neither sophisticated nor secret. It is open in public places and at work, and it is vicious. I have been present when homosexuals have been abused in public places, beaten up in the most bestial fashion. The police not only do not protect homosexuals but beat them up themselves", he said.
Other positive events happened soon after. The Alliance Against Discrimination, which is closely working with ILGA Europe, launched a social centre that is strongly becoming for the LGBT community of Albania a real place where to stay and where to be encouraged. Soon after, PINK Embassy, a large project financed by COC Netherlands started to impose itself as another actor for LGBT rights. Lately Pro LGBT, a voluntarily initiative of young boys and girls was legalized, as well.
What might become our next challenge? Collaboration, good understanding and unity, in order to win a larger battle, that goes beyond political hot summers…
* Kristi is the Executive Director of Pro LGBT, one of the first partisans and publicly known LGBT activist in Albania.