In solidarity with queer students of Bogazici University. Get used to it, we are here, and we are not going anywhere! 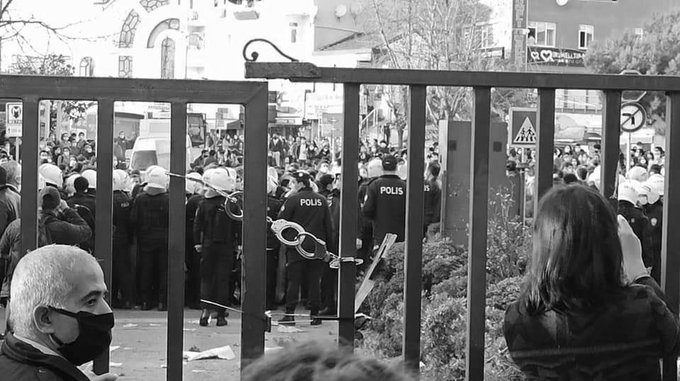 Since early January 2021, there have been several protests done by students and academics at Bogazici University against the undemocratic appointment of trustee rector Melih Bulu. Students have been organizing several events: open lectures, various workshops, concerts, and so many other creative activities to protest Bulu. Last week, students organized an art exhibition and made a call for all types of art pieces. Yet, one of the collages disturbed the radical Islamist student group of Bogazici University and an immediate smear campaign has been led by those students and their supporters outside of the campus.

The night of 29th January turned into a stressful night after seeing 5 students from Bogazici University was taken into custody. One of them was released same night; now, two are under house arrest and 2 are arrested pending trial. It is not the first time LGBTIQ+ people were subjected to hate speech and physical/psychological threats. The language the Governorship of Istanbul used in its press statement, the unfortunate and inappropriate tone of Suleyman Soylu’s (the Minister of Internal Affairs of Turkey) and Abdulhamit Gul’s (the Minister of Justice) tweets about the incident and very much expected position taken by Melih Bulu (trustee rector) are not a really big surprise for LGBTIQ+ community of Turkey. 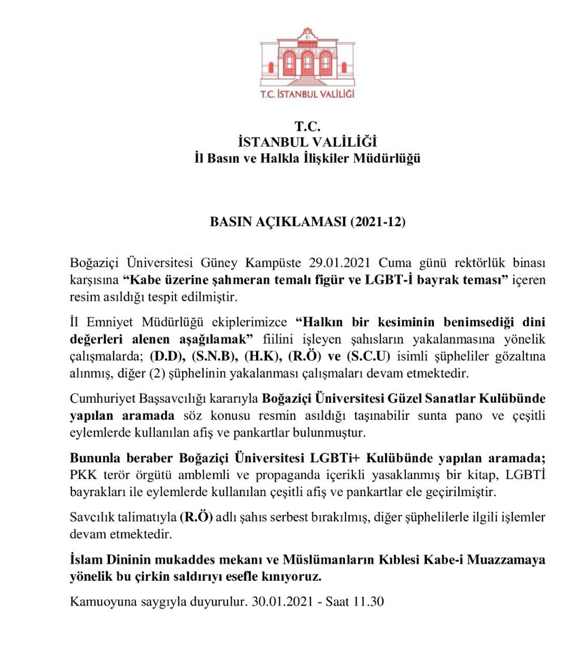 Press Statement of the Governorship of Istanbul

It has been determined that a picture containing a "Shahmaran figure on the Kaaba and the LGBT-I [sic] flag theme" was hung on Friday, 29.01.2021, in Bogazici University South Campus, right across the Rector’s office.

In the efforts of our Provincial Security Directorate teams to apprehend the persons who commit the act of "humiliating the religious values adopted by a section of the public"; The suspects named (D.D), (S.N.B), (H.K), (R.Ö) and (S.C.U) were detained, and the efforts to apprehend the other (2) suspects continue.

In the search carried out in Bogazici University Fine Arts Club with the decision of the Chief Public Prosecutor's Office, a portable chipboard panel on which the mentioned picture was hung and posters and banners used in various actions were found.

Additionally, in the search made in Bogazici University LGBT+ Club[sic]; A banned book with the PKK terrorist organization emblem and propaganda content, LGBTI flags, and various posters and banners used in demonstrations were seized.

The person named (R.Ö) was released on the order of the prosecutor's office, and the proceedings regarding the other suspects continue.

We condemn this ugly attack against the sacred place of Islam and the Qibla of Muslims, the Kaaba. 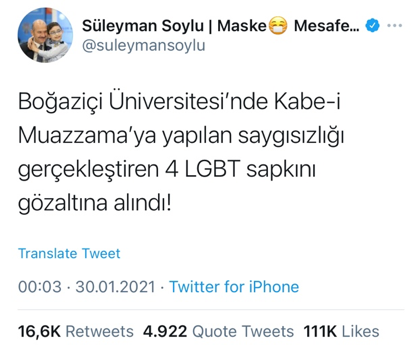 4 LGBT perverts who committed the disrespect to the Kaaba at Bogazici University were detained. 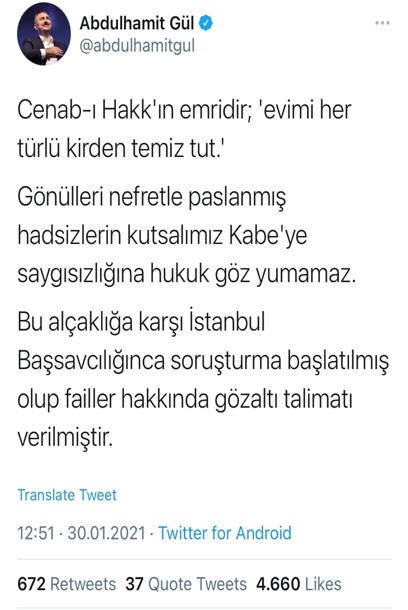 It is the order of God Almighty; 'keep my house clean from all dirt.'

The law cannot tolerate the disrespect of the ignorants whose hearts are rusted with hate against our sacred Kaaba.

An investigation was initiated by the Istanbul Chief Public Prosecutor's Office against this infidelity, and a detention order was given for the perpetrators. 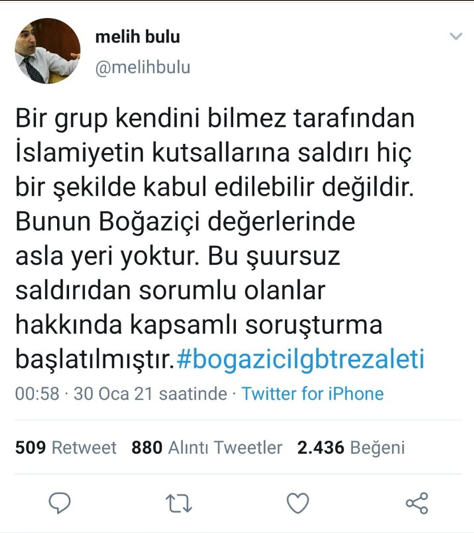 Attacking the sacred of Islam by a group of ignorant is by no means acceptable. This has no place in Bogazici values. A comprehensive investigation has been launched into those responsible for this unconscious attack. #bogazicilgbtdisgrace

In its statement, the Governorship of Istanbul refers to PKK; in his tweet, Soylu calls LGBTIQ+ students as “deviants”; Gül calls LGBTIQ+ students as “dirt” who should be kept away from Kabaa; and in his tweet that he deleted later, Bulu uses the hashtag #BogaziciLgbtDisgrace (#BogaziciLgbtRezaleti). I, as a member of the LGBTIQ+ community of Turkey, am familiar with this harmful language that portrays LGBTIQ+ subjects as a threat to “national safety”, “public order”, “public health”, and “public decency”. I am unfortunately acquainted with the discriminatory discourse that the current government of Turkey uses to differentiate wanted and unwanted citizens from each other. I remember this language from the 2017 press statement of the Beyoglu District Governor’s Office regarding 25 November Events:

Because the events may be contrary to the Constitutional order or general morality, and because they may pose clear and immediate danger to public order and security:

They will not be allowed to ensure public order and security, to protect other people’s rights and freedoms and to prevent crime…

I also know that the Governorship of Ankara used the same discourse to legitimize 2 years long unconstitutional LGBTIQ+ events ban in Ankara:

…It was decided that the aforementioned social media shares might deliberately incite a certain segment of society with different characteristics of social class, race, religion, sect or region against another segment of society, that this might lead to imminent peril with regards to public security, that also it can harm the protection of other people’s rights and liberties, public health and morality as well as of public order, prevention of crime, and therefore there may be reactions and provocations against the groups and individuals taking part in the organization due to certain social sensibilities.

Due to these circumstances, from November 18, 2017 onwards, activities of LGBTT-LGBTI organizations such as film screenings, cinevision, theater plays, panels, talks, exhibitions which include certain social sensitivities and sensibilities in various locations around our city are banned by our Governorship…

The Governorships of Adana, Ankara, Antalya, Istanbul, Izmir, and Mersin used/copied the same narratives to justify crystal clear human rights violations done by the hands of the state. Furthermore, I observed similar narratives in the smear campaign conducted against Bogazici University LGBTI+ Studies Student Club in 2019 . The similar words/expressions such as “security”, “safety”, “public order”, “national safety”, “public health”, “public decency”, “terrorist activities”, “unity of nation and the state”, “rights and freedoms of other people”, and “sensibilities” are mentioned in different statements over and over. Therefore, I claim that since 2015 -when Istanbul Pride Parade was banned for the first time- similar discourses have been instrumentalized by the government to discriminate LGBTIQ+ population. The security and morality discourses are instrumentalized to shadow human rights violations done by the government of Turkey. Furthermore, as it is seen in United Nations Universal Periodic Review of Turkey  , the government cites security and terrorism arguments to deny systematic human rights violations against queer people.

Additionally, these narratives help the government to categorize LGBTIQ+ people as an unwanted population whose death (in this context, it is mostly political silencing) is required for other people to live better.  LGBTIQ+ people have been pushed to the margins; they are represented as the "dirt" spoiling the purity of the nation. By defining LGBTIQ+ people as unwanted others, the state defines the docile/wanted citizens as well. Therefore, this marginalization helps the state to create an illusionary category of unity and purity that should be protected at the expense of the death of unwanted ones.

To repeat my argument: I think that the press statement issued by the Governorship of Istanbul and discriminatory language used by authorities and angry Islamist mob can be linked with long-standing LGBTIQ+-phobic policies, actions, and the language of the current government.  Authorities use the security and morality discourses to distort and reframe the violations. However, despite the pressure and discriminatory actions, the LGBTIQ+ community finds a way to survive and build a safer place for all.

In solidarity with queer students of Bogazici University.

Get used to it, we are here, and we are not going anywhere!