2020 Media Monitoring Report: Hostility against LGBTI+s is not a coincidence, it is organized!

Kaos GL 2020 Media Monitoring Report is out: The rate of hate speech and discriminatory language is 61 percent, LGBTI+ enmity in the media goes hand in hand with politics, organized hate campaigns are on the rise! 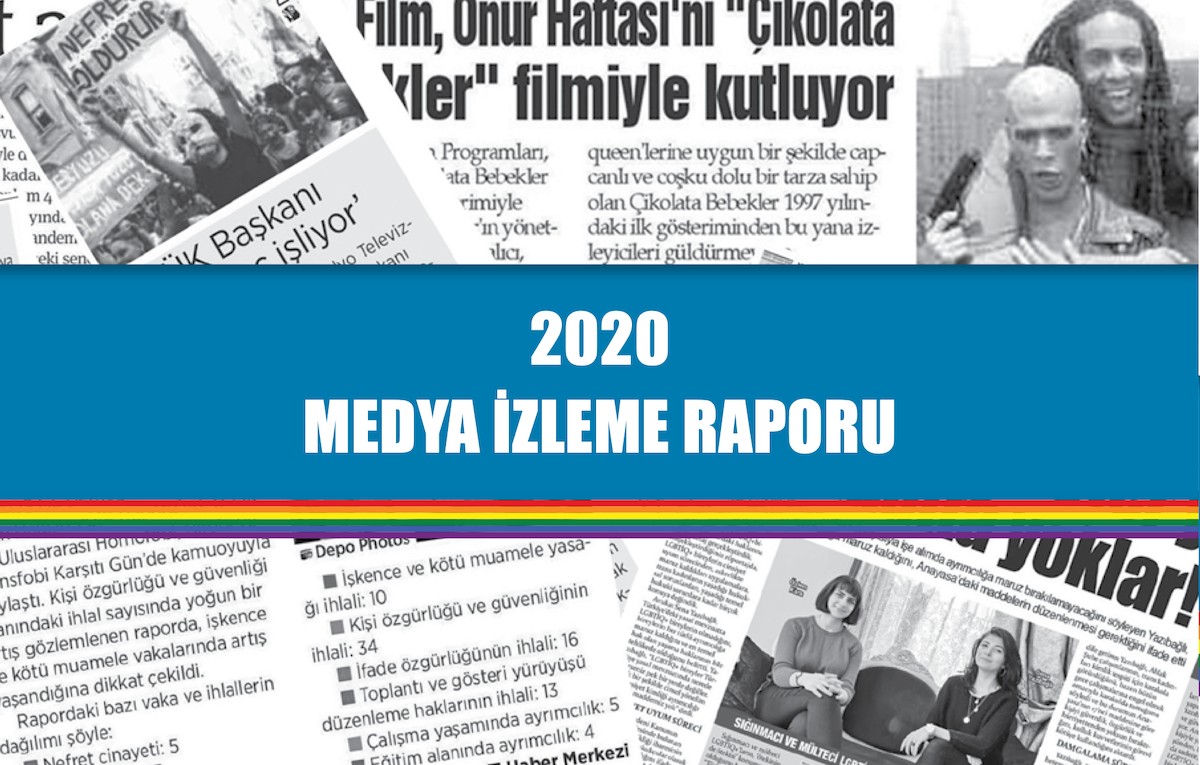 Kaos GL Association published its 2020 Media Monitoring Report on how LGBTI+'s are covered in newspapers. Ali Özbaş conducted the research for the 2020 report of the association, which focuses on LGBTI+ representation in the media for 13 years. Yıldız Tar, Media and Communication Program Coordinator of the association, wrote the report.

In addition to the key findings and hate speech rates for the whole year; newspaper-based reviews, year-based comparative table, examples of discrimination and hate speech, examples of positive news, basic concepts, frequently asked questions and the information note on freedom of expression prepared by Att. Kerem Dikmen is included in the 11-part report. The report not only monitors hate speech and discriminatory language, but also investigates which page of the newspaper the news, interviews or columns are published, and whose opinions are consulted, revealing the general representation of LGBTI+'s in the print media.

CLICK HERE for the 2020 Media Monitoring Report in Turkish

The rate of hate speech and discriminative discourse is 61 percent!

According to the results of the research, only 39 percent (1366) of the texts in the print media can be evaluated within the scope of rights-based journalism. 2093 texts, which make up more than half (61 percent) of all texts, were found to be against the principles of rights journalism:

“Hostility against LGBTI+'s is not a coincidence, it is planned!”

This situation is explained in the report as follows:

“Opposition and hostility against the LGBTI+'s in the media is not a coincidence. Both in this report and in our other monitoring activities, we notice that the policies of enmity in the media have been put into effect very quickly in response to the statements of public authorities, ministers, the President and senior public officials against the LGBTI+'s. The most commonly used strategies to nurture enmity towards LGBTI+'s within the public are discrediting, showing LGBTI+ organizations and LGBTI+'s as "marginal", "non-social elements", marking LGBTI+'s as "Western origin" according to the agenda and showing the LGBTI+'s an external problem, making transforming LGBTI+'s into a means of polarization. When considered together with the facts such as monopolization in the media, censorship and the imprisoned journalists; we are faced with a bloc that has embraced the opposition against LGBTI+'s as an editorial policy. In addition to all these problems, abstract oppositions over the concepts of "family" and "religion" have been brought to the agenda by both the anti-LGBTI+ bloc media and the government on different occasions, especially in recent years. LGBTI+'s and religion are presented as two separate contradictory phenomena contrary to reality. A similar attitude emerges through the concept of "family", especially in smear campaigns shaped around the Istanbul Convention. Media institutions that embrace LGBTI+ opposition into an editorial policy deem it their duty to legitimize anti-LGBTI+ statements and practices of politicians and advise politicians to make anti-LGBTI+ statements (!).

“In addition to the statements and practices of public officials to transform the LGBTI+ perception in the society and to spread LGBTI+ hostility and hatred; pro-government media organizations also develop systematic and organized smear campaigns. It is almost an ideological and political struggle against LGBTI+'s. As such, we cannot explain hate speech against LGBTI+'s with only a lack of information about the issue or simple mistakes. Both media monitoring studies and public practices show that LGBTI+ opposition is a systematic approach, an outcome of a conscious and ideological attitude against LGBTI+'s. LGBTI+ antagonism goes hand in hand with oppressive practices towards gender equality. This situation is reflected in the media as well. By making “LGBTI+ activism and feminism” hostile; they are trying to discredit whole movements. The news of the anti-LGBTI+ media throughout the country spread to the local media by multiplying. Newspapers turn into different names of the same newspaper. This anti-LGBTI+ climate strengthened with the Friday khutbah of the Religious Affairs Administration in the face of the pandemic shows that the state of emergency continues for LGBTI+'s.”