243 women’s organizations demanded the bill towards making a change in the Turkish Penal Code (TCK) be revoked. 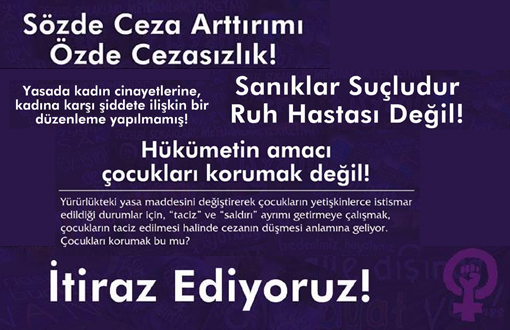 243 women’s organizations demanded the bill towards making a change in the Turkish Penal Code (TCK) be revoked. “We have objections against this bag law that will not prevent sexual harassment or assault, will not protect children and women, or have a deterring effect on attackers,” representatives spoke.
Allegedly penalty increase, in essence impunity
Women’s organizations in the umbrella of the End Violence Platform reacted to the enacting of the bill containing legal amendments in various different areas as a “bag law,” the lack of consultation with its addressees, and the reduction of charges against defendants in lieu of a contribution to the solution.
The Platform pointed out that without constructing institutional mechanisms to fight sexual violence, aggravating or alleviating laws on paper will not solve any social problem, and formulated their criticisms to the bill as follows:
* There is not one amendment concerning violence against or murders of women in a law that proposes modifications to many articles in the TCK. To the contrary, new “abatements” are introduced for men to violence enacted in the course of rape.
* There is no amendment to the practice of unjust provocation abatement in murder cases.
* There is no provision in the bill regarding “predicating the trial on the woman or the child’s statement and placing the liability to prove the contrary to the man,” in crimes of sexual harassment, sexual assault and sexual abuse.
* The bill preserves the statute of limitation, and limits the period for complaint in sexual harassment and certain sexual assault crimes with 6 months.
* The penalty for consensual sexual acts of youth ages 15-18 is increased. The goal is to punish flirting young women and men (and even their parents) with the threat of longer periods of incarceration.
* The bill, modifying the law article in effect, introduces a distinction between “harassment” and “assault” in situations where adults abuse children. This means a decrease in penalties in child harassment.
* The fact that the bill speaks of the “treatment” of the defendants shows that the government still views the action not as a crime but as an affliction. By talking about treatment, they are trying to medicalize this crime in the eyes of society.
"Not protection, conservatism”
Women’s organizations stipulated that the bill aims not to protect children but to become more conservative and limit sexual freedoms, and emphasized that the flirtations of young people and “forced child marriages” are two different issues where a perceptual confusion by society and the judiciary must not be avoided.
Women reacted to the bill today between 12 pm and 1 pm on social media with the hashtag, #sözdecezaarttirimiozdecezasizlik [allegedly penalty increase, in essence impunity]
The protest on social media will take place again between 4 pm and 5 pm.
What happened?
Prime Minister Recep Tayyip Erdogan had announced the bill on May 11, saying, “He who raises a hand to women raises a hand to humanity. He who raises a hand to a child, who subjects a child to violence, has sunk below humanity. This bill we are almost done preparing will be one that seriously increases the penalties in this issue. You can’t just go in and come right out the other door... We are sending this bill bringing very grave, heavy punishments to the Parliament on Monday.”
However when the bill was opened to public view, people had reacted to the regulations regarding the Supreme Court of Appeals and peace courts, noticing also that the weight given to penalties against thievery and narcotics sales and the absence of any regulation regarding male violence or the killing of women." (BİA)