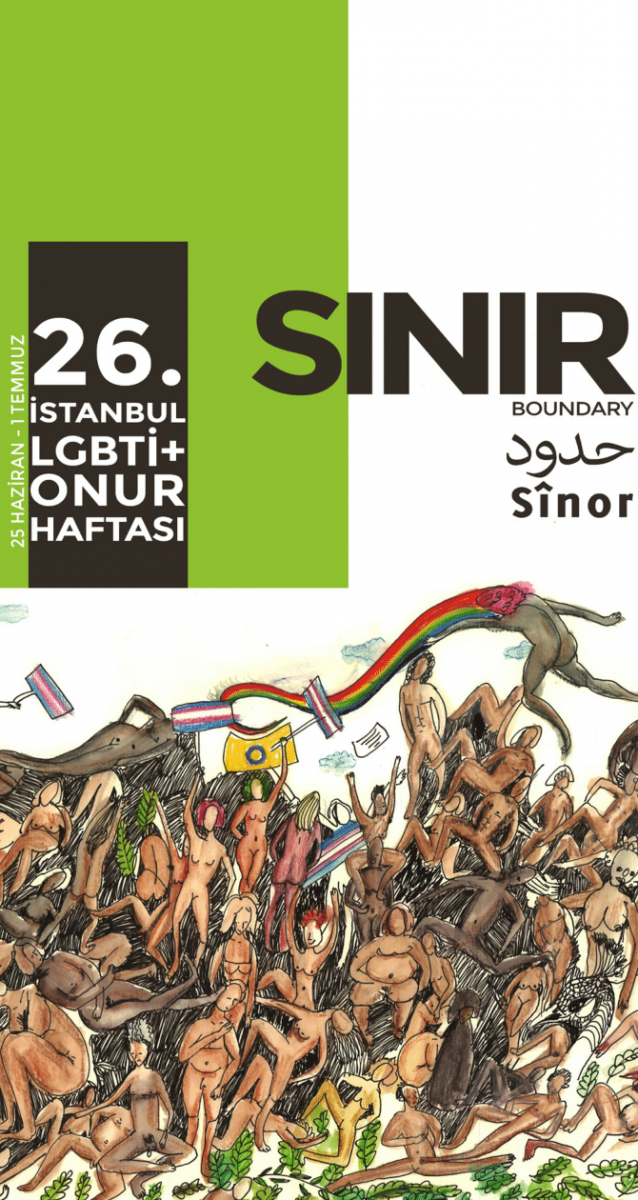 Istanbul LGBTI+ (Lesbian, Gay, Bisexual, Trans, Intersex, Plus) Pride Week will take place free of charge in many places around Taksim and Kadıköy between 25th June and 1st July.

Istanbul LGBTI+ Pride Week was organized under the name of “Sexual Liberation Week” for the first time in 1993, and it was banned because of the governer’s office at that time. The week’s events and the march were banned, activists were held in custody and guests from abroad were deported.  In the following years, Pride Week [organisers] continued to organize their events, despite the bans against them. In this process of struggle, the movement’s demands, and the political support it received helped them to gain more power. The first Pride March was organized in 2003, 10 years after the start [of activities].

Every year, numbers built up after the first march which had 20-30 people. In 2013, we think there were 50.000 people who attended the Pride March. Since 2015, the Pride March has been unexpectedly banned by police.  But the determined LGBTI+ movement “dispersed” to every corner of Istiklal Street and many spaces in the city. In the last year, LGBTI+ individuals got together in small groups around the Taksim district.

On this year’s theme “Boundary”, the Pride Week Committee, say “we want to make invisible boundaries seen and to fight with all our might against these boundaries set to the advantage of those in power. We are fully confident that we can set our own boundaries against those who foster hate speech against our lives, our bodies, our feelings, and that we will break their unbounded confidence.”

This year, under this theme, local LGBTI+ organizations, activists, unions and LGBTI+ branches of political parties, LGBTI+ student clubs and independent activists from different cities will be welcomed in Istanbul. We will discuss how both these physical and imaginary boundaries between us exist and create separations and how can we overcome them. How can we create solidarity practices despite these boundaries?

We call on to you to discuss, rethink, talk about and enhance the meaning of the word “boundary”, a word which we approach within the boundaries of thinking and writing.  We make this call because we do not accept the boundaries drawn against our identities, orientations and existences. We come together, rising from the spaces we are sought to be constrained in, by those who isolate us from the public space saying “Do whatever you want, but behind closed doors”. We know how important it is to erase the boundaries put against love, pleasure and sharing; in spite of those who remain silent to harassment, rape, torture, and violence which recklessly fill the streets.

We make this call because we want society to be aware of the intersex individuals whose bodies are violated at early ages, in an effort to make them “fit” the social norms. We stand against those who restrain us within the boundaries of the binary gender regime to protect their own power positions, we say “we are here” against those who avert their gaze from us, thinking we are “different”. We show that countless queer gender identities and sexual orientations exist, against the boundaries that limit the number of the identities, orientations and existences. We shout out that asexuals, aromantics and many others exist.

In Istanbul we protest the Governorship of Ankara’s ban against LGBTI+ activities for an indefinite period, and we mock their boundaries. As we have been saying for the last 25 years: We do not want the ghettos we are imprisoned in but entire cities! To those who think they can put boundaries on our solidarity and resistance by incarcerating many trans friends like Diren who made her voice heard through her hunger strike, demanding humane treatment in prison, we raise our voices with our hunger and our letters. We win back the pride of a dignified life.

In the past Istanbul Pride Week has been organized under various themes, such as Caution! Family, Taboo, Memory, Resistance, Contact, Normal, We Unite! and What’s Between Us. Throughout the Pride Week, we will seek different methods of resistance and ways of building a stronger solidarity with forums, panels and film screenings focused on the topics of the LGBTI+ movement’s agenda. Additionally we aim to discuss how we can increase solidarity between us during the time of the state of emergency, and create alternative methods for doing this.

Through the week, within the scope of public and free events, there will be panels, workshops, film screenings, theater plays, picnics and a gathering of LGBTI+ organizations from other cities. Activists, LGBTI+ organization representatives, MPs, representatives of foreign consulates as well MPs and activists from abroad will attend the events as participants and speakers.

On 25th of June, Pride Week starts with Feminist Methods of Defense, and will contain more than 50 events during the week. This year, we will be talking about date stories, having DJing workshops, talking about LGBTI+ health issues, and have a memory walk. Also, film screenings, performances, self defense workshops and of course crazy parties will be held.

We plan to close the week with the 16th Istanbul LGBTI+ Pride March on Sunday, 1st July. The Pride Week Committee have started to raise awareness in society through their social networks to ensure that Istanbul LGBTI+ Pride March is not banned this year but takes place without problems, saying “we want to be on the streets with our flags, our colors, our love, our banners” and wishing for a mass march that has reached a hundred thousand people in the past. They say they are expecting everyone to join Pride Week at a time when their rights, existence, and love are being ignored, during the state of emergency, to show once again that they are united, strong, and organized. And they add: If you are not with us, we are far too few!

The Genetically Modified Tomato LGBTI+phobia Awards will be given for the 14th time this year. The nominees are determined by an open call on social media each year. The awards detect and “reward” the LGBTI+phobic speeches and actions, this year the 14th Genetically Modified Tomato Awards will be announced on a special night at Roxy on June 29, Friday.

The Pride Week Committee calls out for participation for both the Pride Week and Pride March to everyone who would like to support them and they add: If you are not with us, we are far too few!

You can click here for LGBTI+ Pride Week full schedule.