2nd Regional Network Against Homophobia Meeting Was Held in Ankara

Kaos GL organized the second Regional Network Against Homophobia meeting on February 16-19 in Ankara with the participation of organizations from the Middle East, Caucasia and the Balkans. 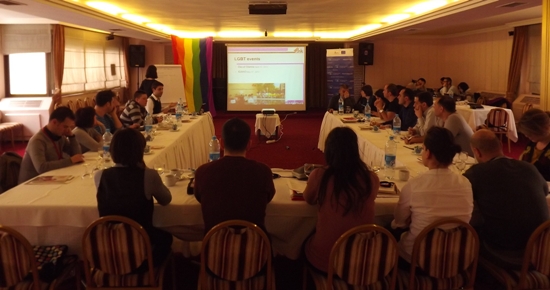 Kaos GL organized the second Regional Network Against Homophobia meeting on February 16-19 in Ankara with the participation of organizations from the Middle East, Caucasia and the Balkans.
Kaos GL, the host of the 7th IDAHO events in Turkey, organized the second Regional Network Against Homophobia meeting on February 16-19 in Ankara with the participation of organizations from the Middle East, Caucasia and the Balkans.
Activists from Albania, Armenia, Azerbaijan, Bosnia Herzegovina, Croatia, Georgia, Greece, Macedonia, Montenegro, Lebanon, Serbia and Turkey came together to talk about forming news ways of network and using it as a powerful tool against hate and as a solidarity shelter in the regions. During the meetings, discussions on how and what kind of a network to create, motivations for the network, best practices from each country (such as shelters, legal victories and media…), challanges being faced, organizational needs and future cooperations took place.
Participants agreed that we reach information about each other via far channels and on different platforms; instead, we wish to reach each other in our own countries and in our local realities. The network will be established in a way it is used as a source of information about regional updates and as a pool of knowledge on local policies and developments.
The meeting was started with a welcoming forum for the new organizations and countries. Pro LGBT from Albania, Gender and Development from Azerbaijan and Helem from Lebanon took the floor to introduce their work and the most dominant agendas in the countries. Pro Albania underlined the importance of the current Anti-Discrimination Bill to be implemented. Helem expressed the “Morality Police” pressure on the community, Article 534 in Penal Code which prohibits having sexual relations that are "contradicting the laws of nature” and the BDS campaign they are endorsing. Gender and Development have expressed their stance on the upcoming Eurovision Song Contest by saying: “We do not want Europeans to come and organize a Pride event in our country. We have our own ways of working against homophobia and transphobia in our own local contexts.”
Organizations have shared their organizational needs for a number of work fields. A good number of organizations have expressed their need to reach the regional information from first hand. Other needs were to establish a lawyers network with a wealth of knowledge on local and international court results and establish a media network to promote human rights of LGBTs in the three regions.
One of the outstanding parts of the network meeting was “Existence of Lesbians and Bisexual Women: Looking at Patriachy and Feminism”. Biljana Stankovic from NLO Novi Sad Lesbian Organization and Andrea Gilbert from Athens Pride took the floor to speak on the issue from their own local realities. Stankovic, mainly speaking on women’s solidarity and the influence of wars on women and female sexuality, expressed: “We started as women in peace movements and as conscientious objectors. When Yugoslavia fell apart, there was hate speech spreading all over the Balkans. So we started writing solidarity and peace letters to each other in prisons, in shelters and as refugees.”
The Regional Network meetings will continue with sub-regional meetings in the three regions. The first sub-regional meeting will be hosted by Queer Zagreb in Croatia. The event not only aims to bring the network members together but also support the local activities being held in the hosting country during the time of the visit. The dates of the meeting in Croatia will be announced soon. 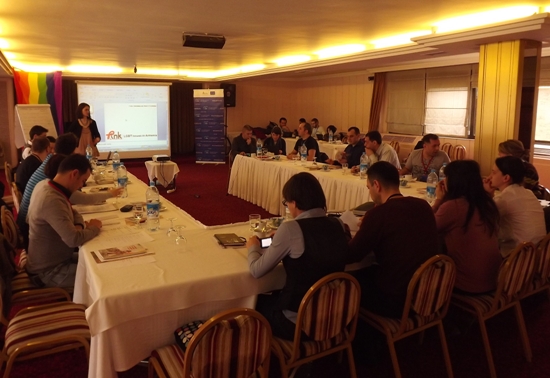 Membership for new organizations is being filed by the secretariat of the network, Kaos GL. Interested organizations should e-mail kaosgl@kaosgl.org to express their interest to be a part in the network.