3rd edition of “Queer Theory: An Introduction” in Turkey

3rd edition of the Turkish translation of "Queer Theory: An Introduction", published in collaboration with Kaos GL and Notabene, is on the shelves. 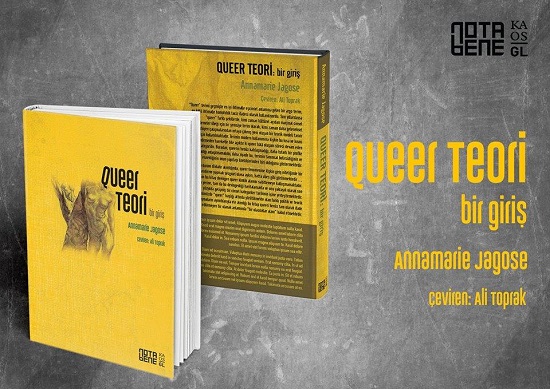 "Queer Theory: An Introduction" by Annamarie Jagose, one of the most basic sources of introduction to queer theory, was translated into Turkish in 2015 by Ali Toprak and edited by Aylime Aslı Demir. Recently, the third edition of the book has been published.

You can access the book from all distributors and bookstores. If you want to buy online, you can click this link.

"Queer" was once used as a slang word for homosexuality in its best sense, a word that insulted homosexuality at worst. In recent years, this concept has started to be used in different ways.

While "Queer" occasionally functions as a concept that combines sexual identities that are considered culturally marginalized, it sometimes defines a model of theory that originates and develops from traditional gay and lesbian studies. Even with this brief and partial assessment of the modern use of the concept, it is clear that queer as a category is still going through a formation process. From here, it should not be understood that the queer has not become concrete yet, lacking a consistent profile; rather, this suggests that the uncertainty and flexibility in the definition of the concept is one of its founding characteristics.

Given this situation, making an introductory assessment of the queer phenomenon may seem contrary to intuitive, or even absurd... This book, which details the different political and theoretical studies being carried out today under the title "queer", considers the queer as "an area of possibilities" in terms of a sense of potentials that is unable to be articulated.