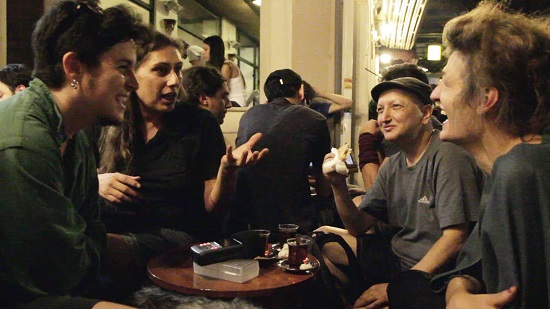 Director Ruzgar Buski talked to Yildiz Tar about his film which made four trans people sit around a table and talk about issues other than their gender identity or getting organized - for the first time in the country. The film is currently on display in the 15th !f Istanbul Independent Film Festival.

How did it all start?

Our first plan was to make a happy trans portrait of 10-15 min. We wanted to get a human portrait based on everyday life apart from hate crimes, laws, court cases. We did not want to have a familiar trans story with a murder at the closing scene or an activist-fighter trans portrait. But then when the Gezi happened, we were like “what are we doing, ayol? Something else is happening here” and our film turned into something else. As the [LGBT] movement was going through something else, we wanted to document people’s feelings and set our frame as LGBT Blok.

We dedicated our film to Ali, Boysan and Zelis [activists who lost their lives while the movie was still in its making]. Boysan says the last words of the film. We hear Zelis’ voice. There are scenes where Eylem, Ali, Sevval and I sit around a table. I’m very sure that this is the only film in Turkish cinema where four trannies sit around a table and chit chat. The only scene where they don’t talk about being killed or coming out to their families! (laughs)

The film documents what happened after the Gezi park protests…

We had made our plan long ago and bought our tickets accordingly. We intended to shoot while we came for the [Istanbul] Pride Week. When we arrived, the park was emptied and we documented people’s feelings after the Gezi. As Ali says in the film, we also smoked their “cigarettes after sex”.

#resitayol is also a woman film. This is my first experience as a director for a feature-length. I did not guide our director of photography. And she focused with a female gaze more on women and trans people. Therefore, naturally the film is visually dominant with women and trans people. I say this but actually for me this is not something necessary to point out.

Do you think we can call #resistayol an LGBT film or trans film?

There is only one person who comes out in the film. The film has a certain focus, it deals with the LGBT movement but it has another issue. For example, I got a little frustrated when I learned that the film would be displayed !f’s rainbow section. OK, one third of the film shows rainbow but enough with calling it “so colorful” or “colorful version of resistance”. There are so many issues addressed in the film. However, people don’t make another sentence after calling it “colorful”.

The opposition movement does not have a strong memory in Turkey. But that is especially the case for the LGBT movement. There are many young queer people who do not know about Ulker Street.

For me, the film can be named as a trans film as it is made from the trans gaze. Neither Tangerine nor the Danish Girl is such a film. They tell trans people from the gaze of cis, straight, white men. Majority of our crew is trans. That our film was made by people within the movement is its characteristic.

We need to get rid off cliche stories from the cis gaze. Same stories are presented again and again. I don’t bother about attracting the mainstream audience. What matters to us is having a place in the hearts of queer people. It is a self-celebrating film without a sad story line. I don’t claim to show a queer reality but I am happy as long as people spend a happy hour with this film.

*Ayol is an exclamatory word associated with femininity and taboos and can mean “well”, “hey”, “wow”. The word itself has been in use in colloquial Turkish and underground LGBTI culture, however, its full and current appropriation by LGBTI organizations is a recent phenomenon that started with the Gezi Resistance in May 2013.  One of the first uses was in a banner “What’s forbidden, ayol!” during protests on Istiklal Avenue in Taksim, Istanbul. “Ayol” has been appearing as graffiti across Turkey since then. “Resist ayol” was used as a twitter hashtag for 2013 Pride Week. Its importance is rooted in the fact that though “ayol” was used by LGBTI organizations, it has been accepted and appropriated across groups in the Resistance. One explanation for its popularity can be found in the feeling that the word transcends and frees traditional gender roles and power relations; it imparts a sense of freedom… [LGBTI News Turkey]