Ankara Governorship replied the application of Kaos GL with regard to providing security of The March against Homophobia and Transphobia: ‘We don’t approve the march as some groupsf in the community might react and it may cause provocations.’ 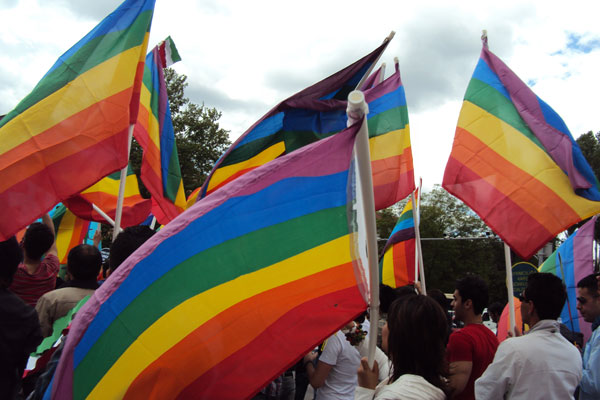 Ankara Governorship replied the application of Kaos GL with regard to providing security of The March against Homophobia and Transphobia: “We don’t approve the march as some groups in the community might react and it may cause provocations.”

The application made to Ankara Governorship by Kaos GL with regard to the march Kaos GL have been doing on the occasion of May 17 International Day against Homophobia and Transphobia since 2008 is replied.

The Association submitted a petition to the Governorship for precautions that will be needed to be taken during the march planned to be made on May 22nd, Sunday.

Kaos GL applied to Governorship for Provision of Security

Remanding that May 17 is celebrated in over 130 countries all-around the world and on the occasion of International Day against Homophobia and Transphobia, activities have been carried out in Turkey since 2006 and no trouble has been encountered during the marches, Kaos GL continued in the appeal as below:

“This year, various workshops, activities and a two-day conference will be organized within this scope as well and on May 22nd, 2016, Sunday, March against Homophobia / open-air meeting will be made between 3 p.m. and 6 p.m. from the Kurtuluş Intersection to Kolej Intersection where Ziya Gökalp Street, Aksu Street and Libya Street are connected and it will end after a press statement is issued. March against Homophobia is the only extensive LGBT march organized in Ankara in every year. No problem has been encountered since 2006.”

“Considering the recent experiences, necessary precautions for completing the march in this year uneventfully as well are requested to be taken.”

‘Provocation and Sensitivity’ Explanation from the Governorship

The reply Ankara Governorship gave to the association’s demand for necessary precautions to be taken continued as; “it was stated that due to certain social sentiments, some fractions in the society might react to the groups or persons that will join the march and that might cause provocations”.

The Governorship stated that they saw fit to not organize the march.

“This decision is unlawful”

Makin a statement on behalf of Kaos GL Association, Attorney Hayriye Kara said; “In fact, right to make a meeting and demonstration march without permission is guaranteed in the Constitution. This year, we particularly requested for precautions due to the recent events however, the Governorship stated us that this march wasn’t approved.”

Kara commented the decision of Ankara Governorship as follows:

“This preclusion is unlawful and it’s contrary to all legislations regulating the demonstration marches and decisions of high court regarding the issue, mainly the international treaties and the Constitution. Governorship didn’t mention any substantial threat but stated that the demonstration to be hold “might cause reactions of some factions and might cause provocations”. The identities of these fractions or whether any concrete threat has arrived in Governorship or Law Enforcement weren’t mentioned in the writing that was sent to us. Besides, even if there is a threat, completion of the demonstration in a peaceful manner is the obligation of the state. Ankara Governorship is obliged to take all kinds of precautions.”

In the announcement made by Kaos GL Association however, it was stated that the march that has been organized every year since 2008 couldn’t be organized this year due to security issues and statement of the Governorship regarding security of the LGBTI’s and anti-homophobia and anti-transphobia people won’t be provided was criticized:

“Due to the security reasons as a result of the recent events, we won’t be able to organize International Day against Homophobia and Transphobia that started in 2006 and March against Homophobia and Transphobia that started in 2008 with the march to the Parliament. The reply to the application we have made to the Governorship for provision of the security is both unlawful and shows that life safety of anti-homophobia and anti-transphobia people isn’t guaranteed by the state. “Provocation and sensitivity of some groups” explanation which constitutes another form of disregarding LGBTI’s continues to be a threat to social equality and peace. Ankara Governorship chose to prevent the march that’s been organized each year instead of providing security.”

What happened in the past?

Last year, police attacked to 2015 Istanbul LGBTI Pride March. Upon attack of the police to 2015 Istanbul LGBTI Pride March, LGBTI organizations filed a criminal complaint for Riot Squad Branch officers to be on trial. Istanbul Governorship didn’t allow the policemen who have attacked to the march to be investigated. Claiming that the Pride March was “banned”, the Governorship argued that the police attack that lasted whole day was ‘within legal boundaries’. Despite the evidences submitted by the LGBTI organizations and views appeared in the press, they argued that ‘there was no information, document or image recording that suggests that police abused their authorities.

Upon receiving a reply that “such information didn’t reach them” from Counter Terrorism Branch, even though they couldn’t have it approved officially, the Association had the document unofficially approved as an “internal correspondence” by GATA Command on the phone.

Çankaya District Police Department which understood to be unaware of the document made a statement saying “We can increase the patrol in the area and occasionally, send officers to check but we don’t have the capacity to keep a team waiting there constantly”.

The Association announced that they will close Kaos Cultural Center until necessary precautions are taken and information regarding the result of the document during the investigation is received but they will continue their works and activities.