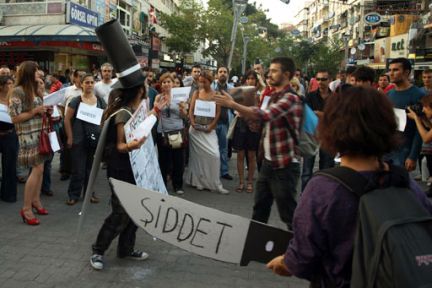 In Ankara, two people with snow masks raped two transsexual women and extorted their money and mobile phones for two different times. Şükrü Ç. and Fatih A. who caught as a result of the operation by police officers were arrested, while Şükrü Ç.’s 14-year-old brother İ.Ç. who helped them was released.
According to the Milliyet’s news, the two trans women named A.C. ve Y.D. were raped and extorted for two times in March and April.
First one was in 31st March in the rented house of A.C. and Y.D. in Esat. During that night, three people one which was a child came to that house. Two of them had sexual intercourse with A.C. and Y.D. in return for money. However, these three people did not give the money and extorted two transsexuals’ money and mobile phones with cleavers. Assailants threatened women to death in order to prevent them from going to the police. Hence they were frightened and did not apply to the police officers.
They got the car and escaped
Before A.C. ve Y.D. got rid of the trauma caused by the first event, in 8th April, three people with snow masks and cleavers broke into the house. Two of the assailants raped A.C. whose mouth covered by them in a room and then raped Y.D. in another room. Then they extorted A.C. and Y.D.’s 2000 TL and mobile phones. In order not to be caught they stole A.C. and Y.D.’s car and escaped.
Mobile phones gave away
The police officers to whom A.C. ve Y.D. applied introduced a wide investigation in order to catch the assailants. Tracing 4 extorted mobile phones, the police officers found out that two of the phones are sold by assailants. Another two phones were detected in the use of the assailants. From the signals received from mobile phones, the police conducted raids to two different places. Şükrü Ç. (25), his 14-year-old brother İ.Ç. and Fatih A. were taken into custody. A.C. and Y.D.  recognized them. Şükrü Ç. and Fatih A. were arrested by the court, while İ.Ç. was released due to age.
Translation: Ecem Yıldırım