Attorneys of TTM told that the Ministry of Interior had become professional at prosecution, attorneyship and judgeship at the same time. 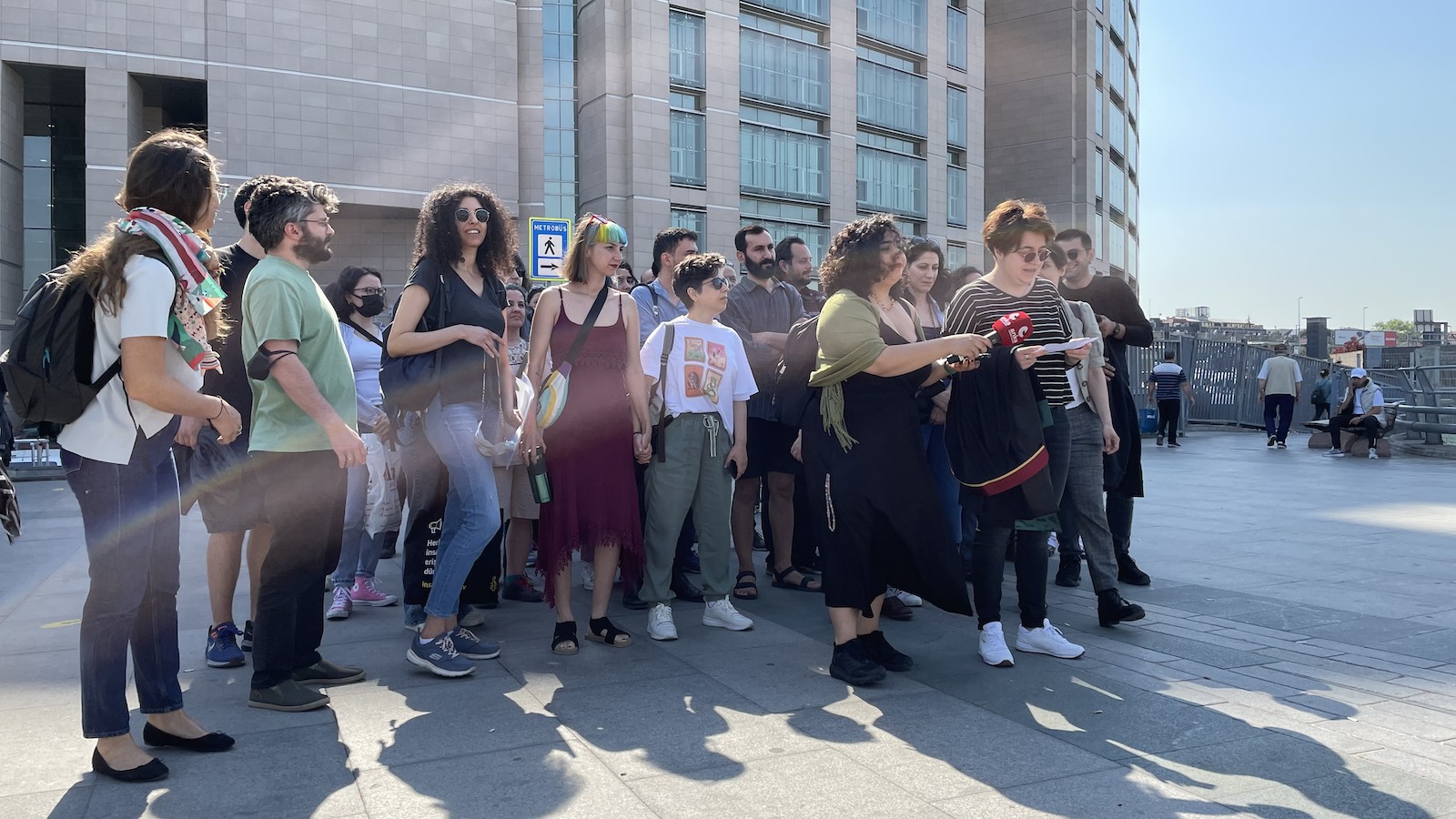 Two separate suits were filed against Association for Supporting Tarlabaşı Community Center (TTM), which has been making an effort to establish safe areas for women and children and empower the inhabitants of the region for fifteen years. The community center, which has been targeted by the media almost for a year, has learned the action for annulment related to the center,  once again via media. The first trial of the case was heard today (May 18) in İstanbul, at 18th Civil Court of First Instance.

It is claimed that The Community Center had become “illegal and immoral” within the context of the lawsuit filed with the indictment issued by İstanbul Chief Public Prosecutor’s Office. While the statements about LGBTI+s are considered as “spiciness” in a discriminatory and an illegal manner, in the report prepared by the auditors of the association; the fundamental rights and freedoms of LGBTI+s has mentioned in the report as “an action to effect the gender identity of children by trying to normalize their sexual orientation by a group of people shortly known as LGBTI (lesbian, gay, bisexual, transvestite, intersex) in the society” and the statements has taken place in the civil case.

The injunction related to “cease and desist order” about the association given within the context of the case, was removed on April 6, in response to the application of TTM.

More than a hundred right defenders from different organizations and journalists were in the courthouse in order to follow the case. TTM Solidarity group, which came together for being shoulder to shoulder with Tarlabaşı Community Center, made a press statement in front of Çağlayan Courthouse.

Hatemongerer 'journalist' provoked a quarrel in front of the hearing room, and she claimed that she is a complainant despite it is not true

On the other hand, the call for hatred and lynching at social media the night before, made by Milat newspaper reporter Özlem Doğan, who has been targeting the association for more than a year, has remained inconclusive. Following the press statement made by right defenders, she has also made a press statement for three people and went on hate speech.

Attorney of the Ministry of Interior remarked that they participated in the audition report and the civil case. He claimed that the brochures and the leaflets were published illegally by the association. He asserted that some education activities were conducted by the association without permission from official authorities and he added:  :

“Some activities were conducted by the defendant association in order to effect the gender identity of children living in Tarlabaşı. It is determined that some activities and educations were conducted in accordance with this purpose. The defendant association imposed a gender identity to children by legitimating the people known as LGBTI+. The association claims that they are conducting social service. Some political views are imposed to the families and children living in Tarlabaşı.”

Attorney of the Ministry designated the people living in Tarlabaşı as “untutored” and he said: “They are open to impact due to being untutored.”

Following the attorneys of Ministry of Interior, Buse Karataş, attorney of TTM, put the violations of procedure in order:

Reminding the Constitution, applicable laws and supreme court decisions, attorney Karataş requested to reverse the interim decision and object the involvement request of both two Ministries.

“Ministry of Interior had become professional at prosecution, attorneyship and judgeship at the same time”

Attorney Selmin Cansu Demir has started her defense as: “The petitions submitted to the file by the Ministries have not been issued to us, we are going to use our right of written statement against them.” And she added:

“In the file ahead of us and in the recordings attached, we notice that an audition process has set in train by  the Ministry of Interior, acting as a prosecutor, on the grounds of intentional perversions of the truth at social media, incorrect and single – sided statements including hate speech. In respect of the audition report, Ministry of Interior acts as a judge and delivers a judgement. And finally today, it plays a part in attorneyship. However it is not acceptable. Ministry of Interior must be neutral.”

Then attorney Demir, invited  the Ministry of Interior and Ministry of Family and Social Services to visit Tarlabaşı and compiled what both ministries are able to do for the people living there:

“Both two ministries can work for the interests of the people living in Tarlabaşı, instead of being here. They can struggle against violence targeting women and children. They can fight against poverty experienced in the region. They can build a library…”

Filing a lawsuit is against freedom of organization

Reminding the disconnection between the actions in the civil case and articles attorney Sevgi Kalan Güvercin said: “At this stage Public Prosecutor has no authority to sue. We request dismissal of the case because it is departure from the rule. We cannot see which action of the association is illegal and why, when we look at the civil case. There is not any concrete reason within the context of the case. So it is against freedom of organization.” And she reminded the constitutional court decisions.

The Court, decided to ask the details of the investigation file to Public Prosecutor, to connect with the İstanbul Governorship Directorate for Relations with Civil Society in order to obtain information about the files related to the report, complaint, determination, investigation and prosecution, to take an expertise from an accountant who is professional about the associations and to evaluate the involvement request of the ministries at the interim decision. The case was postponed to November 2, at 11.30 am.

The association, which was pointed as a target by some of media via defamation news since June 25, 2021, was audited several times during June – September 2021. Following the audits two separate suits were filed against the center.

An action for annulment of the association was also brought on the grounds of “contrariety to law and morality” at the 18th Civil Court of First Instance, with the indictment prepared by Public Prosecutor of İstanbul. The first trial of this file is going to be heard on May, 18, 2022. “Cease and desist order” about the association was removed within the context of the case, on April, 6 upon the application of TTM.

TTM has organized a volunteering activity on June, 27, in 2021, in which the guidebook titled “How to Protect LGBTI+ Students against Family and School Gripper?” prepared by Kaos GL, would be discussed. However this activity was pointed as a target in the media. Hate speech, targeting and defamations went on systematically until February, 9, 2022 and became widespread.

Having been targeted by the media, Ministry of Family and Social Services Beyoğlu District Directorate, Department of Social Services paid a visit to the association. Four days later, an audit by General Directorate of Civil Society Relations was started. The association was neither informed about the audit conclusions, nor the visit. On the other side Police Department Youth Service, took Chair of the Executive Board’s testimony within the claim of “crime of obscenity” on July, 19. The investigation resulted in non-prosecution. The audit which caused to suit several files against the association, was carried out by the Association Auditors from Ministry of Interior between July 26 and August 20, in 2021.

TTM, were able to take information related to the audit conclusions via the reports and annex, which were submitted to the case file, that were brought with the claims of “determination of absence” and “annulment of the association”. The first case is related to “determination of absence”. The first trial of the file, which was suited by Governorship of İstanbul, is going to be heard on April 14, on Thursday, at 8th Civil Court of Peace, at 11.45 am .

The association hardly learned the second suit filed against it, via media. Following a news indicating a case against the association at the headline of Milat newspaper, which rang up the curtain for the defamation process, on February 9, lawyers of the association took information from the courthouse and learned that there had also been an action for annulment about the association, on February 10. Although the suits were filed on the grounds of “contrariety to law and morality”, actions concatenated within the context of the indictment for public interest, do not constitute a crime which would result in annulment of the association. Some issues which may result in administrative fine, like missing in ledger records, organizing educations without receiving permission, failure to asseverate publications of the association to Office of Chief Public Prosecutor, took place in the indictment. In addition, LGBTI+ related statements of the association, included in the report, which was prepared by auditors of the association and formed the basis of the case, as “obscenity” in an unlawful and discriminatory manner. LGBTI+’s fundamental rights and freedoms were also included in the report and the indictment as follows: “people known as LGBTI (gay, lesbian, bisexual, travesty, intersex) in short, who try to influence gender identity of children by normalizing their sexual orientation, in the society.”