Captain, the queers are conducting a peace demonstration; what shall we do?

‘We are organizing in the neighborhoods referred to as slums. With Zeugmadi, I feel that I am becoming free."

We discussed Zeugmadi LGBTI’s first year with Cemre: “We are organizing in the neighborhoods referred to as slums. With Zeugmadi, I feel that I am becoming free. Wherever there are LGBTI people, that is where we too must be. It is not just an LGBTI issue; hatred of Syrians is our issue as well.”
The September 1st, 2014 World Peace Day demonstration
Quite some time has passed since Kaos GL began to organize activities in a number of cities, calling them “Local Steps against Homophobia”. Beginning with a few cities, the activities have spread all over Turkey. The slogan “We don’t want the ghettos, we want the whole city” has begun to be realized.
With the establishment of LGBTI organizations in a number of cities, especially in recent years, the perception that the fight against heterosexism is confined to Beyoglu in Istanbul has been demolished. One of these organizations, called Zeugmadi, began about one year ago in the southeastern city of Gaziantep. Using in its logos the emblem of Antep, a Gypsy girl whose sex is barely perceptible, Zeugmadi LGBTI has said throughout the year: “We’re in Antep, buddy.”
Painting Antep’s streets with the colors of the rainbow, Zeugmadi LGBTI hosted a series of activities in honor of its first year. The culmination of these activities, however, was its participation in a September 1st World Peace Day gathering, on the anniversary of Antep’s LGBTI organizations’ coming out on the street.
While the LGBTI community, on the one hand, were marching to their slogan “Homosexuals will not be silent”, the police walkie-talkies were not silent at all. We heard police say, through their walkie-talkies as they were standing just beyond the journalists who were following the story, the question “Captain, these queers are conducting a peace demonstration. What shall we do?” Zeugmadi LGBTI was not the only one organizing the demonstration. Nevertheless, one of the gathering’s most enthusiastic and sizable groups was the LGBTI participants.
After the demonstration, upon an invitation by Ilkyaz Sikayetcileri (“Spring Malcontents”), the stairways of Yesilsu were painted with the colors of the rainbow. At one point, the shopkeepers nearby joined in the painting effort. A one-year organized effort has carried the freedom march one step forward. 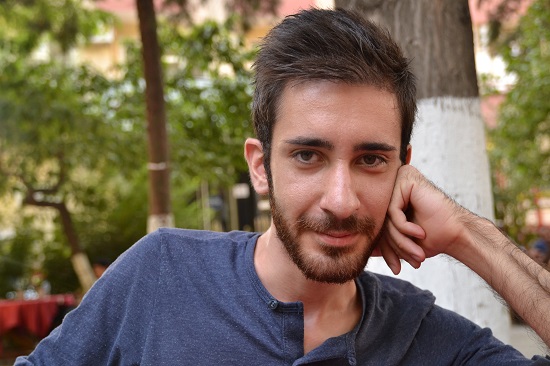 “Wherever there are LGBTI people, that is where we too must be.”
We discussed with Cemre the excitement of the demonstration and Zeugmadi’s first year. Having been with Zeugmadi since its founding, Cemre said that they had been going around all the “outer neighborhoods” for months:
“We are not marching with the more bourgeois sector; we are marching with the LGBTI people who live in the places referred to as slums. They are the ones we are trying to reach. We go into the neighborhoods that are called Antep’s slums. That is where we organize. We do not put up our posters only in urban centers; we also put them up in neighborhoods where the urban poor live.”
The process of preparation, which involved a sizable amount of self-sacrifice, has apparently worn out Cemre and the other activists. But the enthusiasm in his eyes has not diminished at all. When I bring up the process of establishing Zeugmadi LGBTI, a smile emanates from within Cemre’s eyes:
“First of all, we went out on the street on September 1st. We had tremendous impact. When we came out on the street in Antep for the first time, shouting slogans, we attracted a lot of attention. When we were first founded, I had been very excited. I still feel that way. We received considerable training, such as training in sexual health. I feel that I am changing, that my self-confidence is increasing.”
“With Zeugmadi we have become free”
We discuss the fact that the organized fight had made the lives of LGBTI people easier in a number of places. In Antep a lot has changed in one year. Cemre states that with Zeugmadi, the lives of LGBTI people living in Antep have become a little easier:
“Antep is not an emancipated area. No place is, in my judgment. It is difficult to walk on the street safely. We must do something about this issue first of all, I think. Our friends are subjected to verbal and physical abuse. Then again, with Zeugmadi, some things have changed.  When we come out on the street with our flags, we no longer get the reactions we got the first time. Whether they are shopkeepers or the people of Antep, they have begun to get used to us.
“We began to feel more comfortable. Without being aware of it, we became free. Without being aware of it, we became informed. Even our friends who came only to have fun learned quite a few things. Some time later, our meetings and activities became indispensable.”
“Hatred towards Syrians is our concern, too”
Finally we discuss the increase in racist attacks against Syrians in recent days. Cemre says that Zeugmadi LGBTI is an anti-capitalist and anti-fascist organization. He emphasizes that they have participated in a number of demonstrations against racism, and that as far as possible they consider every issue their own: “The fight against the hatred towards Syrians is a fundamental concern of ours as well.”
Criticizing the myth that Syrians are “homophobic, sexist barbarians”, Cemre continues:
“Syrians too are just like us in regards to homophobia. You cannot generalize. To say ‘Syrians are homophobic’ is rather absurd. Moreover, in their culture, to give an example, two men’s holding hands is something normal. There are areas where they are less homophobic than we are. For one, men wear and walk around in tight pants as they please.
“Once you get to know Syrians, you see how nonsensical it is to say that all of them are homophobic. We have Syrian friends who come regularly to Zeugmadi LGBTI as well. We do not experience any problems. We are fighting together.”
Translation: LGBTI News Turkey