Every section of society with one voice: No to hate march

The hashtag #NefretYürüyüşüneHayır (No to hate march) was going to run and run during the hatred activity against LGBTI+s, organized upon the call of Fikirde Birlik ve Mücadele Platformu and with the support of RTÜK in İstanbul at Saraçhane Park. 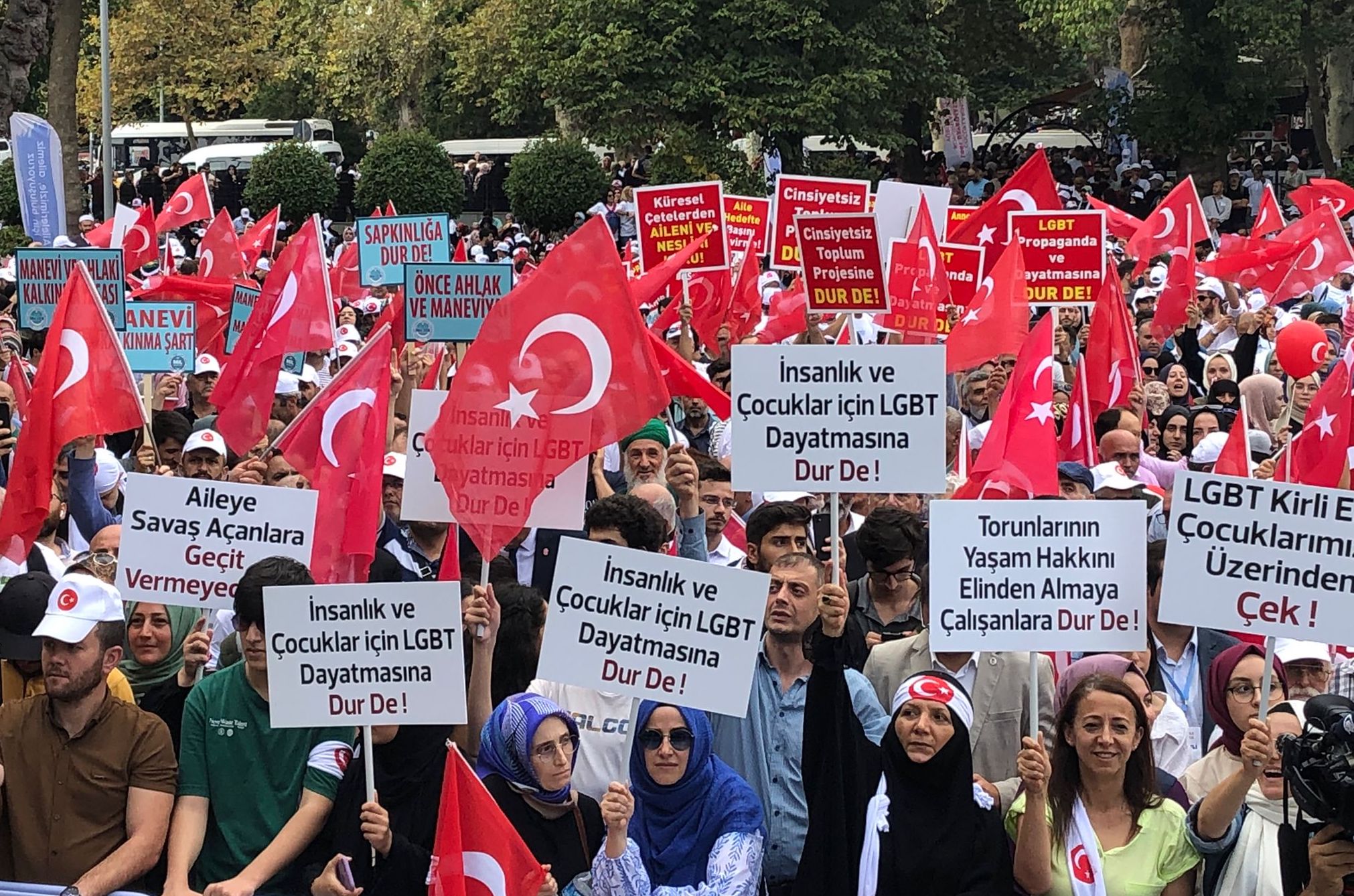 “Great Family Meeting”, which is an anti-LGBTI+ hatred activity, was organized upon the call of Fikirde Birlik ve Mücadele Platformu (Consensus and Struggle Platform) and with the support of the Radio and Television Supreme Council (RTÜK) in İstanbul at Saraçhane Park yesterday (September 18).

Despite the reactions from every sections of the society, about a thousand people from 150 various jamaats and religious sects participated in the meeting which RTÜK recommended as a public service ad.

Meltem Ayvalı, deputy chair of Patriotic (Vatan) Party and Dilek Çınar, chair of Youth Union of Turkey (TGB), also took part at the hatred event which was organized by Fikirde Birlik ve Mücadele Platformu associated to Yesevi Alperenler Ocağı Education, Culture and Solidarity Association. Some members of the religious sects reacted to the music concert at the meeting and they demanded to shut the music down by saying: “What a load of crock! Are we here to listen to guitar!”

Statements against hatred from political parties

HDP MP Züleyha Gülüm said: “This march is a part of the hostile policy of the government against LGBTI+s. This march, which targets LGBTI+s and encourages hate crime, is unacceptable.” via  Twitter account.

Ercüment Akdeniz, chair of EMEP, shared a post via his social media accounts: “Targeting İstanbul Convention and LGBTI+s is a hate crime. This meeting, which is planned to be conducted on Sunday, is worrisome, and permission of İstanbul Governorship is inadmissible. RTÜK’s approval to the calls under color of ‘public service ad’ is the admission of the hate crime. May the fellowship wins not the hatred.”

LGBTİ+ Commission of TİP published the following statements: “We will not let the legitimization of hate. Permitting a hate meeting, which targets LGBTI+s, is not acceptable. We are going to be a close follower of the violation of rights against LGBTI+s, who fight for their inherent right to life.”

TİP MP Sera Kadıgil also shared a post: “This is not an action, it is obviously a hate crime. Those, who stay silent under cover of ‘conservative sensibility’, deny not only their humanity but also the Constitution. If your sensibility anxiety has become more valuable than the Constitution, put up the shutters and go.”

SOL Party published a statement via social media: “Let’s put a brake on the reactionists who adopt discrimination and hate speech as a slogan. LGBTI+ rights are human rights.”

And the statement of the Greens Party was as follows:

“It is not possible to march for hatred. There cannot be a march spreading hatred. It seems that AKP-MHP government has found a foothold from NGO’s, which are quantitatively a lot but do not exist in fact, for its ongoing agitation policy against LGBTI+s. This Sunday, a march, which constitutes a ‘hate crime’, even just by its’ title, according to the international conventions signed by Turkey, and organized by 150 associations, will be conducted. And the state supports it via RTÜK, which is a censorship institution. As Greens Party, we know that the duty of the government is not agitating for hatred and policies which violate the right to life of some sections of the society. Following this targeting, the associations which organized the rally and the supporters of the crime by taking place behind them while the crime was obviously committed, are responsible for the possible troubles against LGBTI+s. We will always defend life against hatred and the rainbow against darkness.”

Professional organizations are also against hatred

Turkish Medical Association (TTB) Human Rights Branch also stated: " These kinds of calls, which marginalize some sections of the society and made by using public funding and the silence of the public authorities against an action involving hate speech, threatens social peace. LGBTI+ rights are human rights. LGBTI+s are neither wrong, nor alone!”