Feminism and Sexual Diversity panels at the World Social Forum 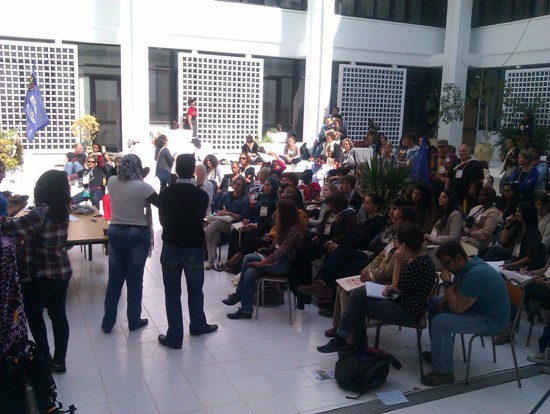 The last day of the World Social Forum, March 26, hosted the Feminist and Sexual Diversity Forums on El Manar University campus.
On the last day of the WSF, Feminist Forum with the participation of women activists from all over the world came together to speak about crimes that directly attack women, such as rape, religious attacks on the bodies and sexualities of women, forced marriages, unequal access to health and legal services and illiteracy.
Additionally, the panel “Threads of a Sexual Liberation Movement in Arab Societies” also took place with the participation of LGBTs and women from Palestine, Syria and Lebanon.
Nasawiya Feminist Organization in Lebanon, AlQaws LGBT Association in Palestine and and a woman activist from the opposition in Syria were the panelists of this Forum.
Panelists discussed the politics surrounding sexuality and gender in various movements around the Arab world, and how they probe the regional/national questions at hand today. 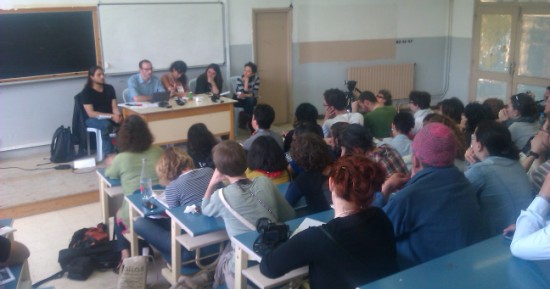 Double siege on the lives of Palestinian LGBTs
During the panel, AlQaws especially brought the impact of the Islamic conservatism and Israeli occupation to the table. Emphasizing the siege of Israel on the daily lives of LGBT people, the AlQaws representative commented:
“We are being attacked by the Israeli side as well as the Islamic communities. We are also attacked by the secularists in the name of “morality”. There are many organizations who would like to work with us but they are afraid of going against the social consensus.
The checkpoints segregate us heavily with the West Bank. Relation with Gaza is almost impossible. According to the Israeli laws, Palestinian LGBTs cannot receive any kind of asylum in the country, so the welcoming image of Israel is nothing but a big lie.”
The World Social Worum 2013 hosted around 120 countries and over 60.000 people from all over the world.
The closing of the Forum was done with a Women’s Marching on Habib Bourguiba Avenue.