From ‘Wednesday Seminars’ to ‘Kaos Academy’

Kaos GL has organized Wednesday Seminars because to create a new paradigm with the appointment of the academy and practice also the support between each other. 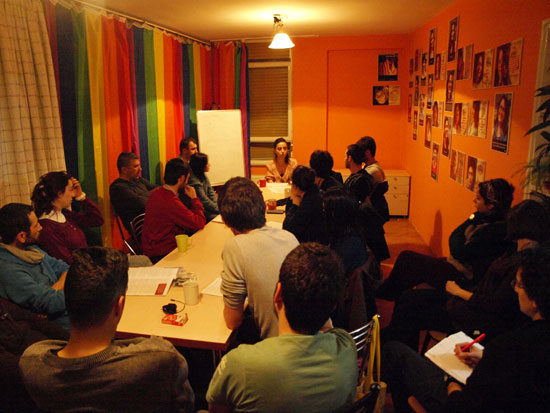 Kaos GL Association has completed the Wednesday Seminars which have continued about two periods in the Kaos Culture Center.

Wednesday Seminars have been aimed to being collective for the inside and outside of the university. They have strived to transform heterosexism and homophobia to general academical and political problem.
Kaos GL has organized Wednesday Seminars because to create a new paradigm with the appointment of the academy and practice also the support between each other.
The explanation from Kaos GL about the program of seminars in the starting of a new period included the hope of the inversion of the seminars to an “academy”.
“The ’Academy’ is the first field which takes a part in Kaos GL’s interests.”
From 1994 to now on, it has been known that Kaos GL which strives about the rights of LGBT (lesbian, gay, bisexual, trans) individuals in Turkey, interests primarily on academy/ university. According to this, the explanation underlines the endeavor of Kaos GL in two points:
“Give visibility to LGBT persons who are isolated from the academy/university with the existing dominant ideology’s discursive and actional manners in Turkey.”
“Critisizing the scientific practice which ignores different gender identities from the dominant ones.”
In the call for the Wednesday Seminars, it has been reminded that the supports from the academy questions the regime of dominant gender:
“It has served for the discussion in an academical plane and problematization about heterosexism, heteronormativity, homophobia and transphobia in a scientific way.”
“The practices inside and outside of universities should be collective.”
Kaos GL pointed out the inadequancy of the practices about LGBT and Queer Studies in universities and called for creating collectiveness of the practices which aimed to transform heterosexism and homophobia to an academical and political problematique.
“Today, the practices about LGBT and Queer Studies have not reached the apparent point yet in academy/ university. There are students or academicians who want to bring the issue to the agenda and study about it, but they could encounter with the reactions in different levels. According to this context, it is a necessity to create collectiveness between the practices which are inside and outside of universities about transforming heterosexism and homophobia to an academical and political problematique.”
The Issues of Wednesday Seminars
Lawyer Elif Ceylan Özsoy “Hate Speech and Hate Crime”
Assoc. Prof. Dr. Tuğrul Erbaydar “Sexual Rights and Heterosexist Morality”
Prof. Dr. Selçuk Candansayar “Who Querry the Reasons of Homosexuality and Why?”
Assoc. Prof. Dr. Güzin Yamaner “The Abuse Like the Apparance of Violance”
Murat Cömert “’Accurst Sodomy’- ’Diseased Homosexual’- ’Proud Gay’- ’Indecisive Queer’: The Historical Look to the Naming and the Classification of Homosexual Desires”
İlknur Üstün “The Abuse from Victimization to Politics”
Ramazan Kaya “What is the Gender of the Nation?”
Buse Kılıçkaya & Elçin Kurbanoğlu “Your Crime is Being Travesty”
İlay Ertetik “Baring as a Political Action”
Psychologist Zehra Tosun “LGBT Persons in the Politics of Shelters”
Sedat Yağcıoğlu “Making Space for LGBTs in the Philosophy of Social Services and Politics”
Prof. Dr. Simten Coşar “Conservative Ideology and Politics: Is Politics Possible for Conserve?”
Psychiatrist Dr. Koray Başar “How LGBT Persons Bare to Their Families and How the Families React?”
Prof. Dr. Işıl Ünal “The Right of Education from the Feminist Perspective: Argue the Right of Education in the Context of Gender and Gender Identities”
Selen Doğan “Conservatism, Feminism and LGBT Persons”
Translation: Deniz Marmasan