From The Domination Of Darkness To The Horizons Of Transfeminist Criticism

Feminist Forum, organized annually on March by Kaos GL, will be carried out on March 28th. Prof. Dr. Susan Stryker and Emi Koyama will speak. 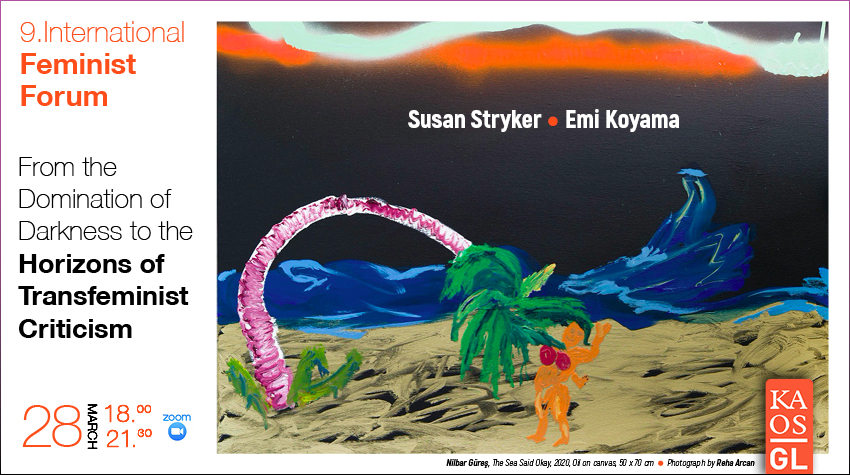 The main theme of the Forum, organized 9th time this year, is “From the Domination of Darkness to the Horizons of Transfeminist Criticism”.

The opening speech of the Forum will be made by Kaos GL’s Academic and Cultural Studies Coordinator Aylime Aslı Demir. Prof. Dr. Susan Stryker and Emi Koyama, the writer of Transfeminist Manifesto, will be the speakers of the Forum. Moderations of the sessions will be carried out by Evren Savcı and Sema Semih.

The course of the program is as follows:

The event, to be held on Zoom is open to everyone, but it is necessary to register at kadin@kaosgl.org.  Simultaneous English-Turkish translation will be provided during the event.

The story of that Leviathan—gender—is the story that now must be told anew.

Manifesting the realness of our identities is what we trans people do, and we can bring worlds along with us. This is our superpower, our burden, our necessity, our gift. Andt his is what transpires now: new realities, emergent transrealities, flowing across the gap that separates actuality from desire, flowing from what is to what will be.

Something has already shifted; something tectonic, climatic. We see the evidence around us as surely as the continents grindingly adjust their placement, as surely as new patterns of earth, air, fire, and water arrange themselves across the planet’s warming surface. Gender—a vast impersonal social apparatus that whispers the secret of our identity into our ears and places us with our kind—gender itself has changed, is changing still, is changing us. All of us. And we in turn change it. The novel configurations of personhood now bubbling to the top of the cultural stew, the new minorities now clamoring for social recognition, are but the signs and symptoms of a deeper flux in the field of life.  The story of that Leviathan—gender—within and against whose shifting shape we all move in our own peculiar ways, is the story that now must be told anew.

Susan Stryker is Professor Emerita of Gender and Women’s Studies at the University of Arizona, and currently holds the Barbara Lee Professorship in Women’s Leadership at Mills College, 2020-2022. Stryker is founding executive editor of TSQ: Transgender Studies Quarterly, author of Transgender History: The Roots of Today’s Revolution, and co-director of the Emmy-winning documentary film Screaming Queens: The Riot at Compton’s Cafeteria. She is the author, co-author, editor, or co-editor of numerous books and anthologies, including The Transgender Studies Reader (Routledge 2006), The Transgender Studies Reader 2 (Routledge 2013), and Transgender History: The Roots of Today’s Revolution (Seal Press 2008, 2017).

Emi Koyama is a multi-issue social justice activist and writer synthesizing feminist, Asian, survivor, dyke, queer, sex worker, intersex, genderqueer, and crip politics, as these factors, while not a complete descriptor of who she is, all impacted her life. Emi is putting the emi back in feminism at www.eminism.org.

Evren Savcı is Assistant Professor of Women’s, Gender and Sexuality Studies at Yale University. Her first book Queer in Translation: Sexual Politics under Neoliberal Islam (2021, Duke University Press) analyzes sexual politics under contemporary Turkey’s AKP regime with an eye to the travel and translation of sexual political vocabulary. Her second book project tentatively entitled Failures of Modernization: Polygamy, Islamic Matrimony and Cousin Marriages in the Turkish Republic turns to these sexual practices that were deemed "uncivilized" and either heavily discouraged or outlawed by the Turkish Republic. Savcı’s work on the intersections of language, knowledge, sexual politics, neoliberalism and religion has appeared in Journal of Marriage and the Family, Ethnography, Sexualities, Political Power and Social Theory, Theory & Event, Journal of Feminist Studies in Religion and GLQ, and in several edited collections.

Born in 1987, İstanbul; Sema Semih studied Philosophy at Boğaziçi University (BA) and Cultural Studies (MA) at İstanbul Bilgi University. He completed his MA thesis, titled Trans Exclusionary Radical Feminism in Turkey: A Historical Overview, in 2020. He worked at Sabancı University Gender and Women's Studies Center of Excellence (SU Gender), as the coordinator of the projects titled Transformative Activism: Rethinking Gender and Politics and Curious Steps: Gender and Memory Walks (2016-2020) He is currently producing natural soaps and cosmetics at Badecanlar.