Groundwork for the 7th Meeting Kicked Off

Groundwork for 7th International Anti-Homophobia Meeting has kicked off. Coordinated by Kaos GL, the international activity organized annually since 2006 against homophobia and transphobia will be held in 2012 for the 7th time. 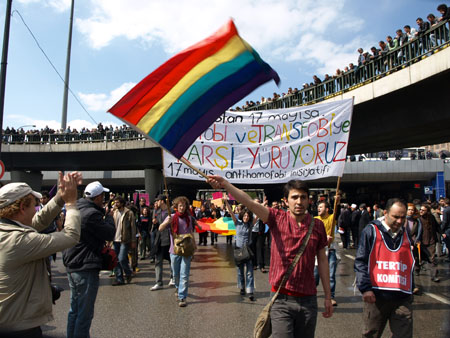 Groundwork for 7th International Anti-Homophobia Meeting has kicked off.
Coordinated by Kaos GL, the international activity organized annually since 2006 against homophobia and transphobia will be held in 2012 for the 7th time.
The meeting organized for the International Anti-Homophobia Day will finish in the week of May 17th in Ankara. Starting with the local activities organized by student groups and civil society organizations during March and April, the 7th Meeting will end with “Anti-Homophobia and Anti-Transphobia Parade” on 20 May 2012, Sunday.
Becoming partners with local civil society organizations and students groups, Kaos GL is planning 20 local activities for the 7th Meeting.
From Academic Forums to Symposiums
“Academic Forum”s orgzanied for last year's Anti-Homophobia Meeting in Ankara and İstanbul will take the form of a “symposium” this year.
Meeting Coordination will make the call it did for the “Acedemic Forum” last year for the symposiums of this year as well.
In the “Academic Forum”s, studies on LGBT individuals, heterosexism, heteronormativity, homophobia and transphobia, and queer theory were presented and opened for disccusion.
Anti-Homophobia Meeting Symposiums

5 symposiums on the struggle of LGBT individuals for their rights and on social rights will be held this year.
In the symposiums that social rights will be discussed, medicalization of sexuality and conservative policies institutionalizing discriminatory practices and inequality for the sake of “family values”, “obscenity”, and “general morality” will be considered. Besided LGBTs, relevant groups working on social rights and experts will join the symposiums.
Symposiums that will be held in March and April are: “Right to Housing, Space and the Sex of City”, “Social Service Areas for LGBT Individuals”, “Sexual Orientation and Gender Identity Discrimination in Education”, “Workplace, Employment, Union Movement”.
Also for the right to health, the symposium “Journey of Homosexuality: From Illness to Right Sturggle, and LGBT Struggle against Inequality” will be held.
Anti-Homophobia Meeting Forums
“Media-Communication Forum”, “Trans Forum”, “Manhood Forum”, “Lesbians and Bisexual Women Forum”, “Art Forum”, “Anti-Militarist Forum”, “Anarcho-Queer Forum”, “Arkadaş Z. Özger Meeting”.
“Forum Against Borders: What Do the Doors Shut by Nationalism Hide?”, “Social Policies and LGBT Rights Forum”, “Refuge Workshop”, “Rainbow Fim Days”.
International Feminist Forum and the Regional Network
“Feminist Forum” held annually since 2006 turns into a 2-day international forum in 2012.
Kaos GL coordinating the “International Feminist Forum” will make a call primarily to its women organization contacts in Middle East and North Africa and will organize the forum with the represantators of feminist organizations in Turkey.
Due to the specificity of regions prevailed by Islamic/conservative policies and regimes, in the “Internation Feminist Forum” how an anti-homophobic discourse and practice can be maintained in the struggle of feminist/women movement against sexism will be discussed.
Organized for the first time in last year's meeting, the 2nd of the “Regional Network Against Homophobia” will be held in the 7th meeting with the participation of people against homophobia and representators of LGBT organizations from Caucasia, Middle East and the Balkans.
District Meetings
During Anti-Homohpbi Meetings, talks and workshops will be organized with the help of non-governmental organizations in districts like Mamak, Keçiören, Batıkent and Sincan in Ankara.
Contact Info: You can contact Nevin Öztop and Ali Erol from the International Anti-Homophobia Meeting Coordination.
nevin@kaosgl.org alierol@kaosgl.org