Three young gay men were attacked by homophobic insult ‘faggots, nonbelievers can’t come in here’ in Istanbul. Police came late to scene of crime and prolonged process of testimony. The hospital delayed treatment on the excuse that we don’t have tomography’. 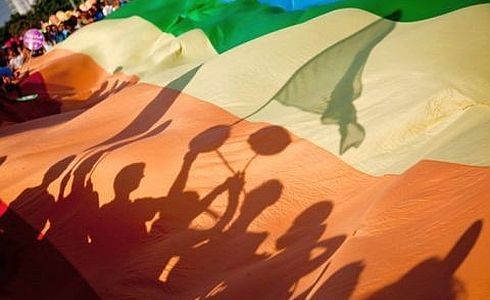 Three young gay men were attacked by homophobic insult “faggots, nonbelievers can’t come in here” in Istanbul. Police came late to scene of crime and prolonged process of testimony. The hospital delayed treatment on the excuse that ‘we don’t have tomography’.
Just after police attacks on Pride March and hate campaigns organized in press three young gay men get attacked around night times in Istanbul at June, 30.
Forum AVM security officers did not help young people, attacked in Bayrampasa Forum, either.
Attackers ran away as a result of police’s arriving to scene of crime very late.
“We are not going to let you in Bayrampasa, you faggots!”
M.Ö, one of the attacked gay man, told moment of attack to KaosGL.org:
“We went Bayrampasa Forum AVM, while passing a wall someone suddenly said ‘what are you looking at’. We were looking at our phones at this moment; I turned my back to look my friends and escape from there but he suddenly jumped on us. The one screamed and two friends of him pounded us, they were also insulting us by saying that ‘we are not going to let you in Bayrampasa, you faggots!’, ‘we are going to kill and bury you in here’ and ‘faggots, nonbelievers can’t come in here.’
“Police came late, attackers ran away”
Indicating that security around only watched the attacks, M.Ö said police came late to scene of crime:
“It almost took one hour police to come. We went Bayrampasa police station, they did not take care of us for such a long time. They made us wait for hours recklessly without even taking our statements. While they should have taken us to hospital for pounding report, they told us to do so. As a result of Lawyer Rozerin Seda Kip’s talking on the phone, they took our statements but they did not want to write that it was hate attack. They tried to gloss over the event but at the end we were able to convey everything objectively.”
“It is directly related to the attacks on Pride March”
M.Ö indicated that the attacks are related to shown as target and hate campaigns started before and after Pride March:
“It is directly related to Pride March, insults made on us are all because of it. Insults are parallel to hate organized with social media. It is a place we went before but we did not encounter any attack like this before.”
Lawyer Kip: Police and the hospital’s recklessness is more disappointing
Lawyer Rozerin Seda Kip criticized police by saying that they did not fulfill their duty because of their “reckless behaviors” and homophobic discrimination.
“Event’s police and the hospital’s recklessness part, we have to come across after, is more disappointing actually.  Police took attack’s victims to station but did not take their statements for hours. I was able to talk to officers after long persistence and arguing with them I told them that they should take statements and take attacked to hospital, otherwise; as police they will be responsible for pounding.”
“After nearly one hour, one of the attacked called me and told me that they were still waiting for their statements to be taken and so, I told them that they should wait for statements and reminded police that it’s police’s duty to go the hospital together to take the results of pounding.”
Lawyer Kip summarized discrimination happened in the hospital like that:
“Victims are going Bayrampasa State Hospital as hurt first, hospitals tried to gloss over the event especially after Pride March and victims are sent back with an excuse that they don’t have tomography. On the other side, police does not want to take them to another hospital even though it’s on their responsibility. There are serious violations and homophobic discrimination.”
Translated by Simge Şirin