The ban in Turkey’s capital Ankara on public events focused on LGBTI issues discriminates against LGBTI people and violates their fundamental rights, and should therefore be immediately lifted. 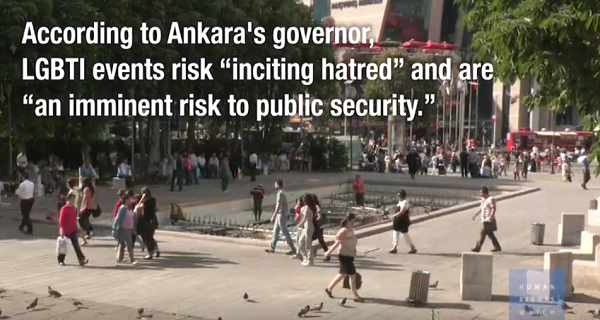 Human Rights Watch: The ban in Turkey's capital Ankara on public events focused on LGBTI issues discriminates against LGBTI people and violates their fundamental rights, and should therefore be immediately lifted.

The ban was originally imposed in November 2017 for an indefinite periodunder Turkey’s state of emergency, but even though emergency rule ended in July 2018, the Ankara governor’s office has not lifted the ban. Instead, on October 3, the governor’s office informed law enforcement and other authorities that it remained in force, gave no indication of when it would end, and extended the ban to LGBTI-focused events generally, not just those organized by LGBTI associations.

All public LGBTI-related discussions are banned in Ankara province

“The Ankara governor should immediately end his ban on public events organized by the LGBTI community and their allies,” said Hugh Williamson, Europe and Central Asia director at Human Rights Watch. “The Ankara authorities have a duty to protect the rights of LGBTI groups and imposing such arbitrary bans is an outrageous effort to further stigmatize and marginalize LGBTI people.”

The Ankara governor’s office initially imposed an indefinite ban on November 18, 2017, on activities by various civil society organizations under the name of LGBTT (lesbian, gay, bisexual, transsexual or transvestite) and LGBTI (lesbian, gay, bisexual, transgender, intersex) such as “film and other screenings, theater plays, panels, talks, exhibitions etc. which touch on certain social sensibilities and sensitivities.” It is the only ban of its kind in Turkey.

The Ankara governor’s alleged justification for the ban are “social sensitivities,” the risk of LGBTI events “inciting hatred and enmity,” and a “clear and imminent risk to public security” that allegedly necessitates the ban to “prevent crimes being committed,” “protect public health and morality,” and “protect other people’s rights and freedoms.” Human Rights Watch rejects such claims as wholly unfounded. They reflect an anti-LGBTI bias and fail to establish a legitimate purpose or need for the ban, as required under international law.

On January 21, 2019, Human Rights Watch wrote to the Ankara governor seeking comments on the continuing ban but at this writing had not received a response.

Turkey’s government imposed numerous bans on public assemblies during the state of emergency, but such a total and apparently indefinite ban is unique, Human Rights Watch said.

LGBTI groups told Human Rights Watch that the Ankara governor’s ban came about after an anti-LGBTI social media campaign on Twitter targeting a screening event organized by the German Embassy and the transgender rights group Pink Life LGBTT Solidarity Association (Pink Life) in Ankara. A week earlier, President Recep Tayyip Erdoğan had criticized the Republican People’s Party, the largest opposition party in parliament, for a requirement to include LGBTI candidates in one local municipality, calling it immoral, outrageous, and a war against national values.

The Ankara governor’s office stated that it had decided to impose the banafter learning from social and print media that LGBTI groups were planning various public events, such as film screenings and panels. The governor’s office cited the Law on Provincial Administration, the Law on Assemblies and Public Demonstrations, and the State of Emergency Law as the legal basis for the ban.

Article 11/c of the Law on Provincial Administration provides that the governor must maintain “peace and security” in the province. Article 17 of the Law on Assemblies and Public Demonstrations permits the governor to postpone public assemblies for a month on the grounds of national security, public order, public health, and public morality, or the protection of other people’s rights and freedoms. The law permits the governor to ban assemblies altogether if there is a “near and imminent threat” of a crime being committed. Under article 11/f of the State of Emergency, broadcasts of all kinds can be banned in the interest of preserving general security, law and order, public order, and preventing violence.

The governor’s office has not explained why LGBTI-themed events constitute a near and imminent threat that could reasonably justify their ban.

Activists only became aware of the October 2018 extension of the ban when the student group Middle East Technical University (METU) LGBTI+ Solidarity scheduled its first event of the new academic year on October 9. The university administration informed the group that they could not hold the event because of the continuing ban.

Representatives of LGBTI organizations told Human Rights Watch that the ban adds to the stigmatization and marginalization of LGBTI people and makes them vulnerable to attacks. The ban casts LGBTI people as criminals and a threat to public values, which leads to their isolation, they said. They said that the restriction meant the loss of platforms to reach new generations and opportunities to share their expertise with public institutions and to create change in cooperation with the local authorities.

The Ankara ban violates Turkey’s international obligations to respect and protect rights to equality before the law and freedom of peaceful expression and association, which are also protected under the Turkish Constitution. As a party to the European Convention on Human Rights, Turkey is obligated to take necessary measures to enable peaceful assemblies to take place. The ban violates that obligation, among many others. The European Court of Human Rights has without exception found in dozens of cases that bans on LGBTI marches, whether on grounds of morals, health, or security, violate the convention. Addressing laws that seek to prevent public discussion of LGBTI issues as the Ankara ban does, the court has said that “above all by adopting such laws the authorities reinforce stigma and prejudice and encourage homophobia, which is incompatible with the notions of equality, pluralism and tolerance inherent in a democratic society.”

As a Council of Europe member, Turkey should adhere to its standards to combat discrimination on the grounds of sexual orientation or gender identity and should not misuse legal and administrative provisions to impose unjustified restrictions on freedom of expression and peaceful assembly on grounds of public health, public morality, and public order. In a letter sent to the Turkish government in September 2018, five UN human rights experts expressed their “serious concern at the recent indefinite ban on public LGBTI-related gatherings or events in Ankara.” In their response letter on November 7, 2018, Turkish authorities wrote that they acted in compliance with domestic law and clauses of international agreements Turkey is a party to.

“Banning non-violent events with baseless claims and criminalizing citizens in the eyes of the wider society is not the act of a rights-respecting state, and it causes nothing but further intimidation for LGBTI groups legally operating around the country,” Williamson said. “Everyone has the right to peaceful association and assembly regardless of gender identity or sexual orientation.”

“The fact that LGBTI organizations cannot hold events means an LGBTI person cannot enjoy basic rights in Ankara,” said Yıldız Tar from Kaos GL, adding that many of the sorts of activities that were banned were a necessary platform for LGBTI people to get mental health support or legal remedies when their rights are violated.

Kaos GL’s lawyer, Kerem Dikmen, said that while the ban does not alter the legal status of associations, it does leave them unable to fulfill their mandates. Dikmen said the groups had to minimize risk to their legal status by becoming less visible.