On the meeting for 8 March, Women and LGBT members had cried out against heterosexism! 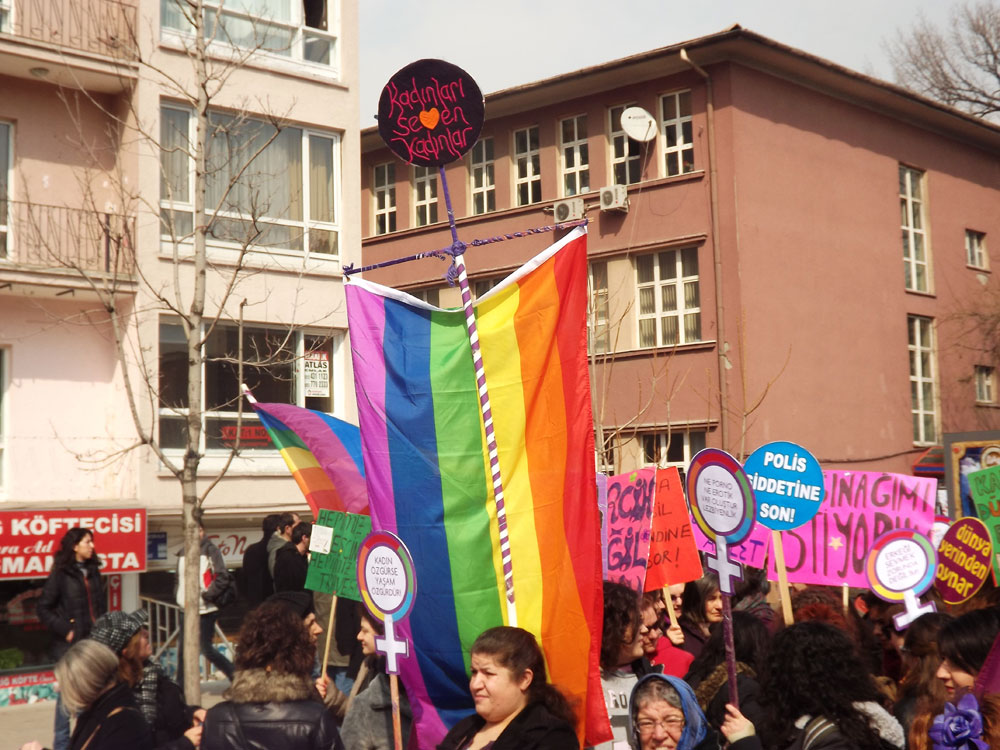 On the meeting for 8 March, Women and LGBT members had cried out against heterosexism!
In Ankara and Istanbul, on the meetings for International Women’s Day, Millions of women wanted male violence, arrestment and detention against women to be ended up and wanted to make their labor visible. On the meeting area, trans-women urged to stop violence against women.
Buse Kılıçkaya, chair of the Pembe Hayat administrative board, said that ‘system, only because we are women, locks us into house, forbids to use streets and nights, and insists that heterosexualism is an only sexual orientation and color of identity card is an absolute indicator of gender identity, and also only because we are lesbian, bisexual, and trans women, it surrounds us with violence, and this system is your patriarchal system.’
In Istanbul, Eylem Çağdaş from Istanbul LGBT Solidarity Organization stated the following statement from her press release:
‘Today we are here neither because we want to be appreciated because of our labor at house and at work nor we want to take over this stage or streets from men for one day. We are here because we will preserve the riot of our sisters who had struggled for the women’s liberation.’
Provocation defense applied to hate crimes should be repealed, and Hate Crime Laws should be transformed according to demands of women and LGBT members. We demand state to hinder everybody from discriminatory practices in education, health, and other service areas, to rearrange the law in the manner that it includes sexual orientation and equality of gender identity, and to secure constitutional rights of LGBT members.
In Kadıköy, İstanbul, on the meeting for Women’s Day arranged by 8 March Woman Platform, millions of women wanted male violence, arrestment and detention against women to be ended up and wanted to make their labor visible.
‘A world in which Women and LGBT members are free’
The Member of Parliament (BDP), Sebahat Tuncel who made speech on meeting, stated that ‘We send our compliment to Clara Zetkins, Rosa Luxemburgs, Beritans and to all women who create these days. Tuncel, who indicated that women from Turkey and Kurdish, Laz, Circassian and Armanian are badly influenced from war policies, also stated that ‘Women from Turkey together with Kurdish women are giving voice to peace.’ Tuncel pointed out that they uttered their objection to the law for non-violant struggle and any solution cannot be found without providing gender equality. ‘I want a world where women and LGBT members aren’t oppressed, and all peoples live together peacefully. I salute all indomitable women.’ After the speeches, she read a letter from diseased prisoner Hediye Aksoy. Meeting continued with the concert of feminists’ band, Rojda, and the Dengbejs from Solidarity and Aid Association of Women Artists in Van.