The 187th issue of Kaos GL Magazine, which has been published since 1994, is on the shelves with the “Well-Being” cover. 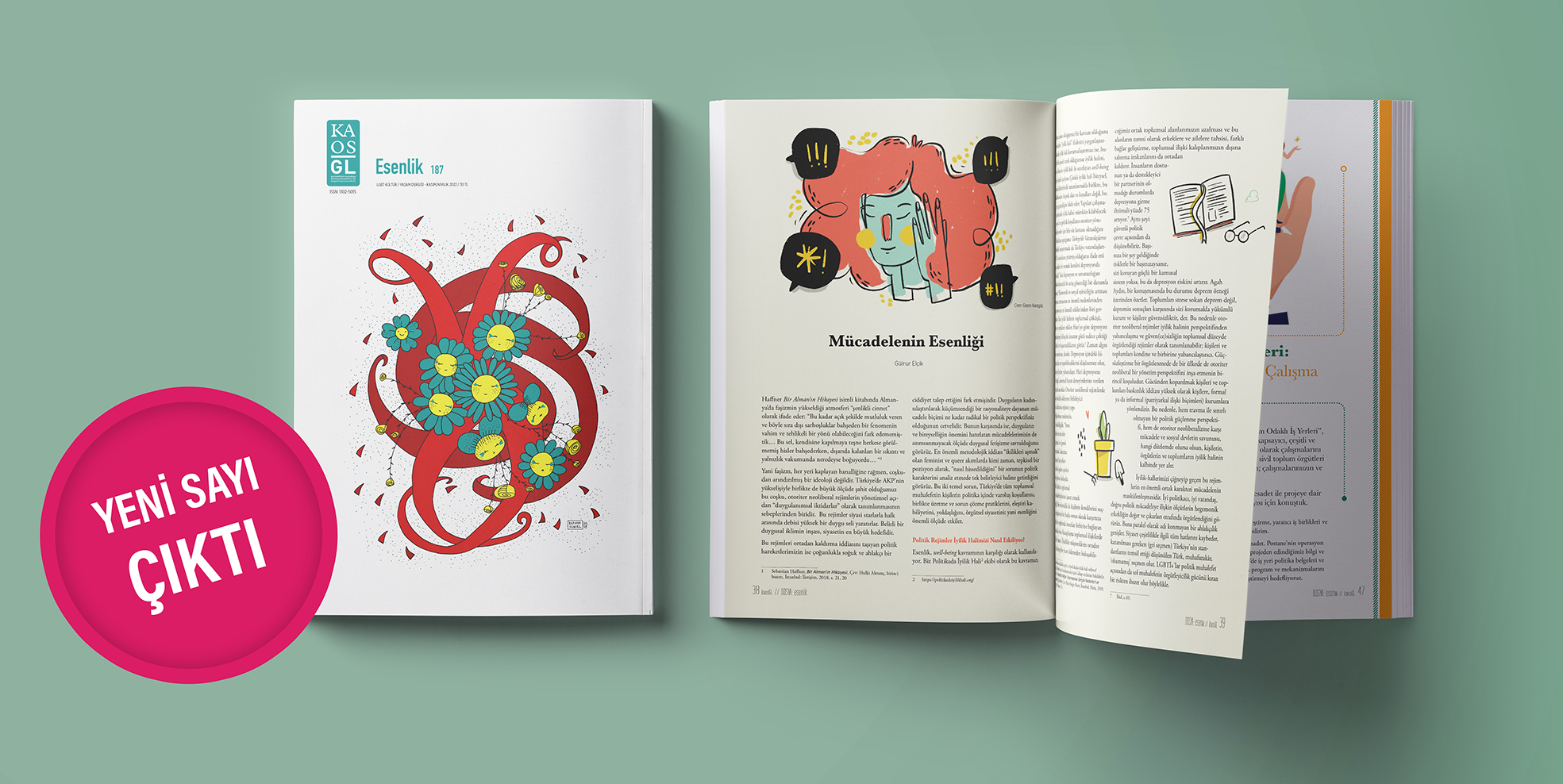 November-December issue of Kaos GL Magazine is out, and the subject of the issue is well-being.

Elmas with the article titled “Organizational Well-Being within the context of Nonviolence Studies”, Aras Ören with an interview entitled: “On Organizational Well-Being: This is what we need to talk about right now”, Gülnur Elçik with an article titled “Well-Being of the Struggle”, Kardelen Yılmaz, Rıza Yılmaz and Alp Kemaloğlu with the column titled: “Effects of Legal and Psychosocial Support on Well-Being”, Kerem, Mesadet and Balacan with an interview called: “Caring Workspaces: How to Create Inclusive, Diverse and Safe Workspaces”, and Belgin with the article entitled: ”Well-Being of Intersex People is Possible with Togetherness and Awareness” contributed to the “Well-Being” issue.

Papatya with the tale titled: “Kadınlık Ringi (Ring of Feminity)”, Hulusi Çakmak with the article called: “Cinsel Kimliğin Yeniden İnşası Bağlamında Paramparça Romanı (Spilled Blood Novel in the Context of Reconstruction of Sexual Identity)”, Enes Çelenay with the article titled: “Uzanan Bedenler Arasında Seyre Daldığımız İşler: Bedenler arasında izlenim düşü (The Works we gaze off into the view among the reclining bodies: Illusion of Impression among the Bodies)”, Burak Kaçi with an interview entitled: “Bir Hikâye Anlatıcısıyla Tanışmak: Burak Kaçi ve Öteki’nin Hikâyeleri (Making the acquaintance of the Narrator: Stories of Burak Kaçi and the Other”, Kevser Güler with the interview titled: “Act like the ocean floor: Interview with Erin Johnson”, and Oğuzhan Nuh with the article titled: “Dün, Bugün ve Yarın Türkiye’de HIV+ Olmak (Living with HIV in Turkey from past to today and future)” contributed to the Actual Pages.

While the artworks of Baysan Yüksel is on the cover and general pages, Gizem Karagöz’s illustrations have accompanied the articles.

Online subscribers can read the magazine from its website. The issue can be found in bookstores or on the website of Notebene Publications.