Kaos On The Streets

Ireland’s non-profit newspaper rabble talked to Nevin Öztop of Kaos GL on being an LGBT activist and street protests in Turkey. 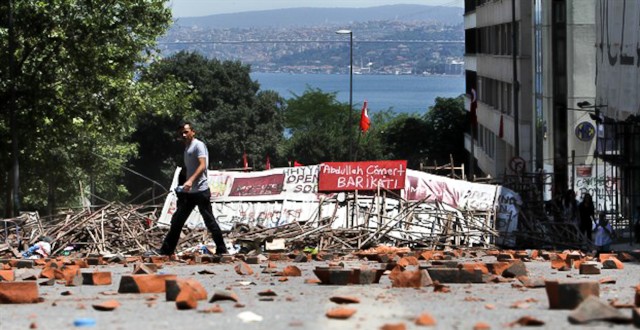 Ireland’s non-profit newspaper rabble talked to Nevin Öztop of Kaos GL on being an LGBT activist and street protests in Turkey.
Firstly perhaps you could tell us how quickly you adapted to life as a street protestor?
Adapting to a life as a protestor started in the head first and long ago. As a lesbian activist involved in the feminist and LGBT movement, nothing really was new to me. What was new was the involvement of other people whom I would never imagine to see on the street protesting with me and the unity of different political and social groups. When the riots started, I was in Antalya having a nice vacation. I ended up spending a lot of time in front of TV watching and reading about all that was happening. Two days after the riots started, I flew to Ankara and right after I put my luggage at home, I went outside and called a colleague of mine to ask where we could meet to join the protest. I felt like I could not wait another minute without contributing to what has been started by the youth.
You told a story about going to the protest in your local streets dressed in nice clothes and how inappropriate there were. What happened to make you change your wardrobe and over the course of the first week or how exactly did you change?
The first time I went on the street, I knew I would be within my own friends’ group, as it is safer to hang out as communities to block direct police attacks. A lot of protestors who were caught on their own were subject to much more police brutality and arbitrary detentions. We have people who went missing for a few days and showed up eventually. So yes! I put on a grey dress and nice purple converse shoes. I had a little bag, which I now know is not able to hold any of the crucial things I need! But I was very good with picking the best scarf to cover my face, and I need credit for it. By the end of the night (for some it is around midnight, for some others it goes ‘till the sunrise), you are soaked with water, your face is covered with various stuff, your eyes do not see anymore and your voice does not sound the same. Then you know, next day you need to put on pants, better shoes, a thick scarf, and carry at least a lemon and a bottle of water. The first day I was on the street, I was feeling strong but a part of me was also scared as the time went. There was a helicopter on top of us, projecting light into our eyes. At one point, I was afraid they would throw gas bombs on our heads, as they did in another part of Ankara. With the light above us, it felt as if we were already in detention!
As well as clothing, did you notice other things about your routine changing? For instance your sleep patterns, daily life and schedules. Did you suddenly have more daily contact with people outside your normal sphere?
Everything about our lives has changed, to be honest. We lived a life like in fiction movies: a wolf at moonlight, and a human during the day! People went on the streets after 8 pm, and for some, it continued till the morning. We were students, workers… There were a lot of elder women and men who were retired. I personally was on the street after I got off from work. I would go home, eat dinner, and then go out. Then I would come back home around 1am or so, and sleep, take a shower in the morning, put on my “work” clothes and walk on the street with the rest of public. It was such a bizarre feeling to see the whole capital city being fully destroyed and covered with graffiti against fascism. To know that you are now going to work but were a part of what you see only a few hours ago is just indescribable. You work, you protest, you sleep, and in the meantime you keep up with news. I had irregular sleeping hours, due to gas bombs on the streets, a lot of evenings passed with no sleep. A few friends of mine had to go and get their blood checked as they were having irregular heartbeats. And I was feeling anxious all the time. These became a part of our lives unfortunately.
Tell us how the street movement accepted LGBT activists in particular. Was there a fear of excessive police repression and did other non-aligned activists ever reach badly or was there a positive element to the expressions on the street?
I think it was different between Istanbul and other cities such as Ankara and Izmir. Istanbul’s air sometimes can give you the feeling of a small heaven. In some venues and neighborhoods, you have fake heavens which give you the feeling you are welcomed there. But this is only a fake heaven, which was broken and carried to the city center, Taksim, for the first time with Gezi protests. In Ankara, the profile of the protestors varied from working class and elder to students and youth movement. That brought both challenges and advantages. I remember wanting to give a message to my lesbian allies in neighboring countries, so once I held a sign that said “Lesbian power against killer police.” The sign was in English, so that gave me a layer of feeling protected but a lot of people could still understand what it says. In the end, with no united rainbow/poster presence around me, it still felt warm inside to be doing that for myself. Of course, the presence of LGBT activism and feminism was visible in every city very shortly after the Gezi protests… Parks, boulevards, streets spoke our language everyday.