The Kaos GL’s Women to Women Story Contest, the only lesbian story contest in Turkey, celebrated its 10th anniversary. 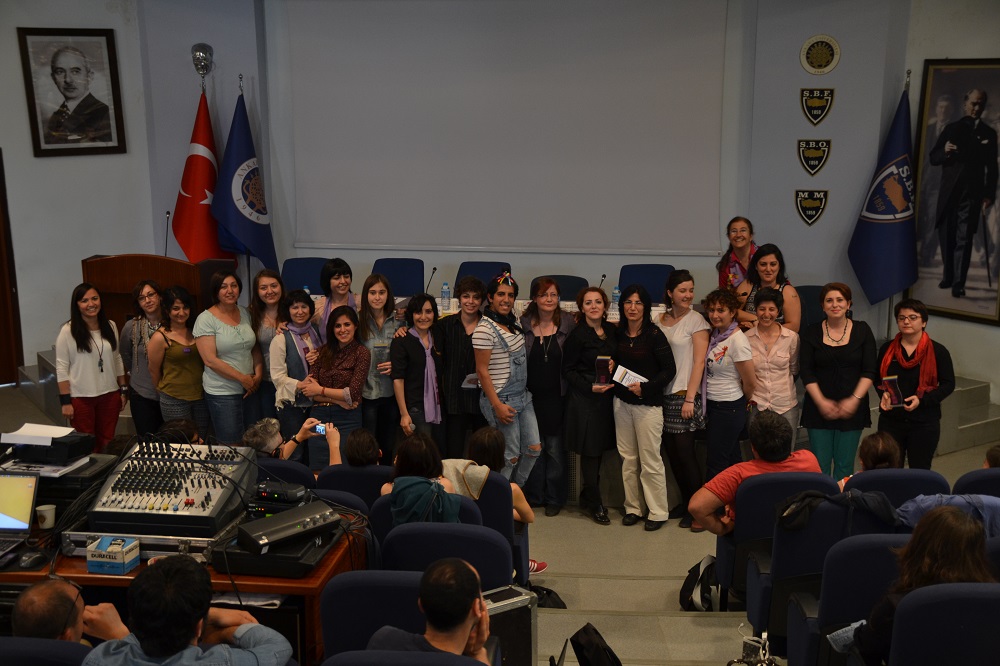 The Kaos GL’s Women to Women Story Contest, the only lesbian story contest in Turkey, celebrated its 10th anniversary.
Prof. Dr. Guzin Yamaner made the opening speech for the award ceremony and said:
“In a country where everything is split into parts, it is really important to reach to the 10th anniversary of the Women to Women Story Contest. I believe the contest will make it to a second decade.”
Women story authors fighting the mainstream literary canon
Yamaner underlined that the biggest problem they face is the mainstream literary canon and stated: “This contest is a little, nomadic line fighting the canon.”
The awards were handed out to winners of this year’s contest.
Here are some of the highlights from woman story authors:
Aysun Kara:
After I wrote my stories, I sent them to some literary magazines but I couldn’t hear back from them. They didn’t even say that my stories were bad. I think what’s worse than not being liked is being ignored.
I got divorced before I got my second book published. And now my first book carries a different surname, which puts me in a difficult situation.
Senem Dere:
We have a book club called the Thursday Group where we share what we write and read for 10 years. We had this very special need for sharing what we wrote and getting critics.
Following the words of then Prime Minister Erdogan’s “we will not allow girls and boys to live together”, we decided to write some erotic stories. But women wrote about the absence of eroticism in their lives, while men wrote pornographic stuff. And when women wrote erotic stories, they were met with sentences like “oh, you really lived this?”
Gozde Demirbilek:
I have been an active internet user since I was 11. Internet enabled me to express myself freely. I felt so free when I was writing in online forums. After some time, there appeared some literary groups and fanzines on Facebook. Then I started writing for online fanzines. As women authors, we faced some pressure about our private lives. That’s how we formed our own separate group. We didn’t want to be ashamed of the discriminatory stuff on that fanzine. I didn’t want my friends asking me “oh, you are writing for that”.
Then I founded up the blog “Gay Literature”. And I started getting so many questions from the followers. I even got a question from a mother in the USA whose son is gay at a time when I had so many problems with my mom over my sexual orientation. It encouraged me a lot to see the impact of what I wrote on people’s lives.
Melike Uzun:
I always wrote but I wasn’t sure whether I should get them published. I was afraid of having this author’s ambition. Later I opened a website with a friend of mine where we shared book critics. Internet was so helpful for being free of hierarchy.
Berna Ozpinar:
I want to talk about the Kaos GL’s Women Authors’ Workshop that I attended. I found it very interesting that the workshop was organized by Kaos GL. I think the LGBTI movement is one of the most active social movements in the world. I wanted to refine my writing on this field.
The workshop was meant to last for 5 months. But we still continue our workshop after 5 months. It was so different from all other authors’ workshops I attended. We decided for everything altogether. As the main theme of the workshop was “body”, we did various drama works about the borders or voice of bodies ad body awareness. And then we took it to the writing.
Huriye Sahin:
As an Armenian woman, I had so many sad memories of writing. Thinking of how to write about the Armenian Genocide, trans murders and what Kurdish people or women faced, I had this idea of writing about a socialist couple in love with each other.
The first thing I wrote about gays was an interview with two activists from Kaos GL. It drew so much criticism from socialist circles. Then I talked to friends from Pink Life Association before I wrote about trans murders. We cried a lot together and I used some parts of what they shared with me in my book. The editor changed the Armenian words in the book, removed the parts about trans murders and I didn’t allow the publishing house to publish the book that way. They published it as I wanted but at first they refused to distribute it. However, I couldn’t get my money because they change my contract without my knowledge.
What makes me sad is not being ripped off but my Armenian words being removed. During the Armenian Genocide, 230 intellectuals of ours were killed and their books were destroyed. It is so sad that who did this to me identified as a socialist.
You can find the program of the 10th International Anti-Homophobia Meeting here.
The 10th International Anti-Homophobia Meeting is supported by the Embassy of Canada, the Embassy of Germany, the Embassy of the Kingdom of Netherlands, the Royal Norwegian Embassy and the SIDA.