Cases of violating anonymity and confidentiality, which more often take place in establishments that provide healthcare services and psychological support, legal bodies or military, are not uncommon. 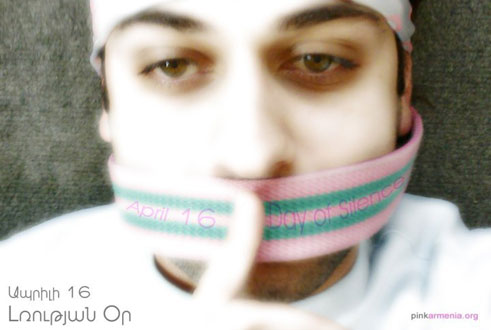 By Mamikon Hovsepyan
mmkarmenia@gmail.com
Pink Armenia, Armenia
Discrimination towards lesbian, gay, bisexual, and transgender people begins with the family. Discrimination towards LGBTs by family members manifests itself through breaking off all contact, kicking them out of the house and disowning them. Afterwards, discrimination continues in nearly all stages and facets of life: study and work, military service, healthcare and other services, media, entertainment, and so on. Cases of violating anonymity and confidentiality, which more often take place in establishments that provide healthcare services and psychological support, legal bodies or military, are not uncommon.
Intolerance towards LGBT people more so relies on unwritten norms, customs and social memory.
There are cases of rape and even death of LGBT people in Armenia. The majority of LGBTs say that they have never and will never go to the police or law enforcement bodies for protecting their rights, since they not only don’t resolve the issues at hand, but also become the cause for new issues to arise.
Nevertheless, it’s also important to note that the public and the state must take into account its citizens’ individual right to live freely and without violating other people’s rights. However, the more an individual’s external appearance or the way he carries himself reveals his sexual orientation or gender identity, the more serious the level of discrimination can become. Discrimination can manifest itself not only through articulating offensive statements, but also by carrying out physical, sexual and psychological violence.
There is a lack of trust towards professionals in different spheres. For example in healthcare, to overcome the situation, they avoid seeking professional help (a fear of not preserving anonymity and confidentiality). Some LGBT people, if not attempted then at least had thoughts of committing suicide.
On the topic of legal resolution, legislation and international documents that regulate or are connected to eliminating all forms of discrimination against LGBT people, encouraging public tolerance, and protecting LGBT rights were examined. Not only is the justice system that regulates the sector in which LGBT people’s rights should be protected in the Republic of Armenia not united, but also legislative definitions within the boundaries of understanding and the legislation connected to this sector, which would guarantee the possibility of protecting their rights, are actually absent from legislation.
Neo-Nazi movement in Armenia is spreading hate and intolerance toward LGBT people, distributing tracks and disseminating heinous messages to the citizens, which content seek to reject homosexuality. Those movements promote also hate crimes and they have never been banned by the Government or legal bodies.
Police attack gay and trans people in the streets, taking them to police stations. There are many cases when GT people were physically violated at police station or in the streets by policemen.
Police also blackmails them and take money for not informing their relatives about their sexual orientation and gender identity.
Gay, bisexual and trans men can be exempted from military service, though not all of them come out with their orientation and instead they go to the army. Violations towards GBT people in the army are committed by their peer and officers usually. There are cases of physical abuse, rape and psychological pressure, and those cases have never been reported by the Ministry of Defense.
In mass media, the cases of pedophilia between adult and underage men is considered as homosexuality, while pedophilia between adult man and underage girl in considered only pedophilia.
Mass media remains as a main hate promoter among society, usually comparing homosexuality with prostitution, sects, diseases, and bringing negative examples while talking about LGBT people.
Armenian Church is one of the homophobic institutions in Armenia. Usually they organize meetings and discussion in Grigor Lusavorich Church and often they use the opportunity to touch the topic of homosexuality, to blame LGBT people. There were cases when participants promoted hate crimes during the meeting and it was accepted by the organizer priests as a right action. During press conferences and interview, regardless of what the interview is about (religious minorities, prostitution, addictions), priests use the opportunity to touch the topic of homosexuality and blame LGBT people.