‘I am the minister of a Conservative Democrat Party’

Fatma Şahin, Turkish Minister of Familiy, ‘about the problems of homosexuals, we can give all the Support as long as a family value does not hurt’ she said. 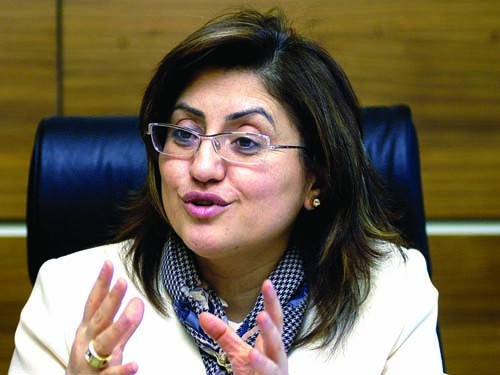 Fatma Şahin, Turkish Minister of Familiy, “about the problems of homosexuals, we can give all the Support as long as a family value does not hurt” she said.
The first minister of the Ministry of Family and Social Policies, Fatma Sahin was a guest of the show named “Argument”.
Kurdish problem is spoken mainly in the show and Minister Sahin, responded to questions from audience about homosexuality.
Referring to the Kurdish issue “every one of 74 million people is my citizen”, but when the subject comes to homosexuality and one of the quest Balcicek Ilter asked to her “do you think homosexuality is a disease?”, she said “I will not comment on this issue, we can give all the Support as long as a family value does not hurt”.
“I reject all forms of discrimination as a minister of this country”
Minister Fatma Sahin gave the following answer the question about homosexuality.
"The World Health Organization did a study on this issue, the scientific world discussing this topic. As they are discussing this topic, I think it is not right to comment on this subject. As a minister of this country, I find important to have a good perspective on a system that works to solve everyone’s problem, rejecting all forms of discrimination. If you remember, our Ministry of Health had made a statement and said “If they had problems we need to help them.”
I think one of the important thing is, when we are taking this subject to a different media, we are to live in a process leading to deadlocks. Solution-focused studies can be done to their problems. We are dedicated ourselves to find solutions what needs to done. We have to take protective measures that ignore the family values. So I think we need to distinguish between these two.”
Ilter, one of the quest of the show said “you will do all these without othering, right?” and the minister Sahin responded “hopefully”.
The former Minister responsible for the affairs of women and families, Selma Aliye Kavaf said previously "I believe homosexuality is a biological disorder, a disease," and she was criticized and protested by the LGBT organizations.
Women’s organizations and LGBT organizations called minister Kavaf to “resign” and she was not offered as parliamentary candidate by the AK Parti again. And Fatma Sahin brought to the ministry which name is changed to “Ministry of Family and Social Policies”.