Demet Yanardağ from the Black Pink Triangle İzmir Association talked to ‘Violence Stories From Turkey’ about trans murders in Turkey. 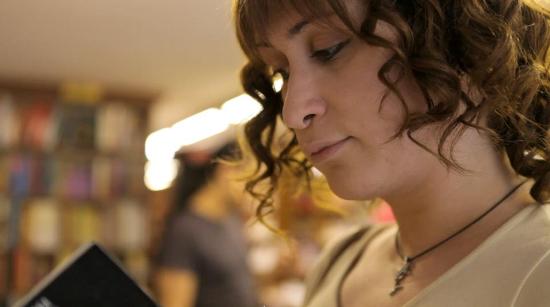 Trans woman and sex worker Dora Özer was stabbed to death at her home in Kuşadası on July 9, 2013. About 20 days later, another hate killing took place in İstanbul: a trans woman named Gaye was murdered also at her own home. Even after these series of deaths, hate crimes are still not on the government’s agenda. Demet Yanardağ from the Black Pink Triangle İzmir Association talked to “Violence Stories From Turkey” about Dora, about trans murders that are “ordinary” in the eyes of the media and the public, and about the justice system that absolves these murders by maintaining their silence.
I met Dora 6 or 7 years ago, when I first came to İzmir from Çanakkale. At that point the circumstances in İzmir were horrible because Hüseyin Çapkın was the commissioner. Hüseyin Çapkın was someone who believed that he was restoring order by oppressing people just like Hortum Süleyman who tormented people in Beyoğlu a while ago.
How was the general atmosphere regarding LGBT people in İzmir in mid 2000’s?
In that period, transsexuals were getting picked up by the police even at daytime and they would be kept waiting in police stations and were tortured. Because of the police’s point system and the  Misdemeanor Law, they would fine us repeatedly during the same day. I was taken into custody with my sweatsuit on, coming back from the grocery carrying yoghurt, bread and a pack of cigarettes. When they could not find trans people on the streets, they would come to our doors in order to score points and yell “give us a girl.” After the cancellation of the point system we were able to walk around more comfortably, at least during daytime. Dora came to İzmir at a time like this, when she was just 18 or 19.
How did Dora build a life in this city after she arrived in İzmir?
She was so young. She did not have career options because of her gender identity so she worked as a sex worker. Because of the constant fines, she had to go out on the streets to work more. You know the saying “where logic ends, soldiery begins,” it is actually not like that because where logic ends the state begins. And these fines are a vicious circle. Some of my friends describe these fines as “taxation” but if you are fined while you are just walking on the street during the day it is nothing but extortion!
When did Dora decide to go to Kuşadası and why?
She was taken to the Public Security and Morality Bureau and her fingerprints were taken, she was labeled. She was kept until the morning and the fines were too much for her. At last she said, “I cannot make it in İzmir, not only I am unable to build a life here, I am running into debt even more” and settled in Kuşadası. It had been 3 or 4 years since she had left but we never lost communication. She had a new circle of friends in Kuşadası and she built a life there. She would visit us in İzmir from time to time. During her visits we would reminisce about our good times together. Though death is a very familiar thing for us, we could not guess that death would find her in Kuşadası after she ran away from the pressures of İzmir. 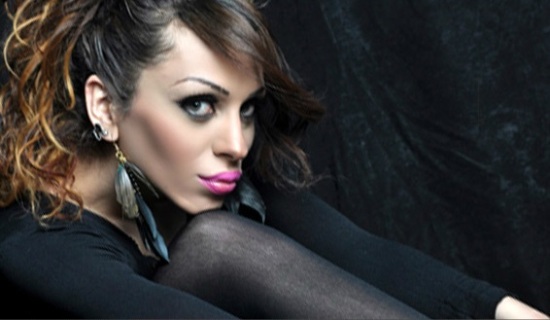 How did Dora’s death make you feel?
Every year a few of my friends get killed. Of course it hurts me whenever someone dies but when it is someone I have memories with, it affects me so much more. I think of the question, “when will my friends hear about my death?” Saying this is extremely painful but I do not know even one transsexual who died of natural causes. Like Hrant Dink said; LGBT people also live with "a dove’s skittishness." Just because you are not murdered this year does not mean that you will not be murdered the next. Just today, another trans person in İzmir committed suicide because she could no longer stand her lover, who forced her to work by using violence, and she knew that complaining to the police would do no good. In fact, we are getting killed constantly and everyone just lets it happen.
The state tries to depict trans murders as individual cases but LGBT activists emphasize that trans murders are political each and every time. What are the reasons for these murders?
There are so many things involved. For someone to feel safe, they need to have people who they can trust on their side. Most trans people have to run away from their families and are thought to be “alone” by society. Everybody knows that their families do not stand by them. Of course the state is not on their side and police torture continues. When someone wants to hurt us, their conscience hurts as much as it would when they hit a street cat. They know that the cat is alone and so is the transsexual. However, Dora’s murderer is not just one person. All state structures that push trans individuals to work as sex workers have a share in that murder.
What do you think about the way trans murders are handled by the media?
Though lately LGBT people are more visible, the media did not give much space to Dora’s murder. Our friend Azra was killed in 2010 and her murder was broadcasted more because of the fact that her shooter was a serial killer who had previously killed two other women. One was a banker, the other a student and they were much more valuable than Azra for the media, the state, and the people. We organized protests for Dora in many different cities but I wonder how much the press followed. News agencies that covered our reaction are the ones who already see us and who we work with, but other agencies did not. I have given many interviews to the mainstream media, but I guess after the interviews, executives scold their journalists because my interviews either remain unreleased or they get distorted.
The media claimed that Dora’s family rejected her funeral. Is this true?
Dora had problems with her family when she ran away but before she was murdered everything was fine between them. This shows that journalists also share society’s perception that “neither the police nor her family stands by her.” This perception provides a basis for our murders. They did not care and they just reported with the assumption that “if the victim is a transsexual, it is likely that she was rejected by her family.” But her family came and they took the funeral. They gave our lawyer power of attorney for the upcoming judicial process and they will follow up on the case themselves. Together, we will do our best to make sure the murderer gets the heaviest possible penalty. 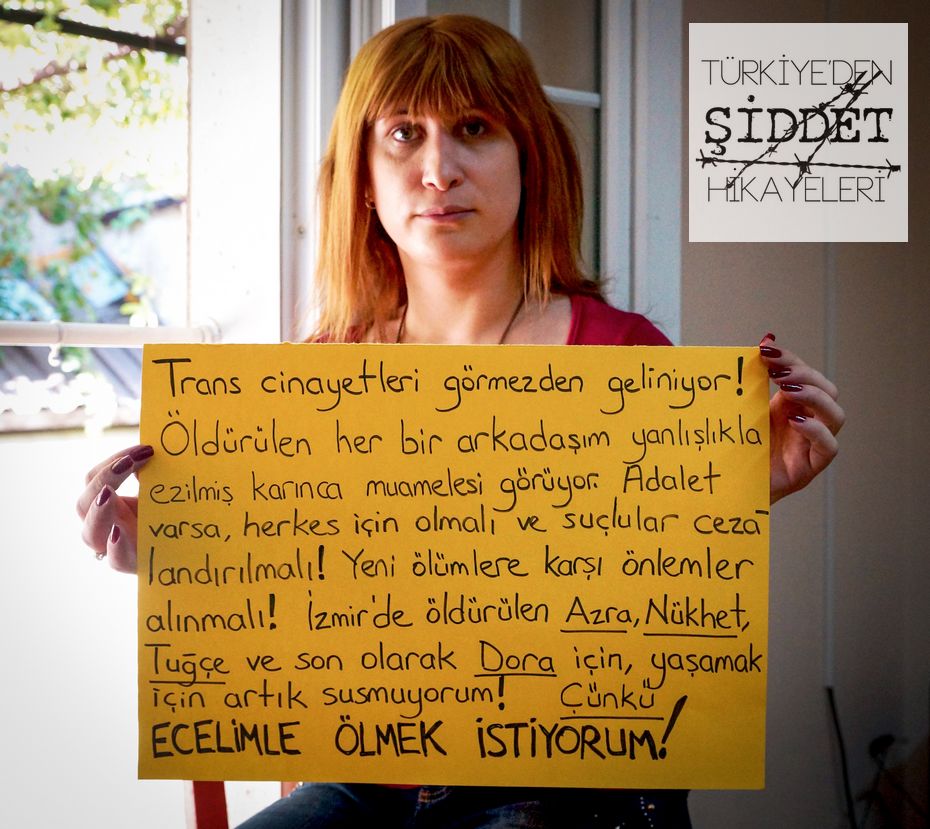 Where do your hopes stand regarding the case?
Unfortunately, I do not think that the trial will depart from the usual situation. Certain people will make the murderer memorize certain expressions like “She said ‘it is my turn’ after intercourse,” “She attacked me,” “She said: ’I will do you, too’ it hurt my pride.” These are the usual expressions trans murderers are told to say in order to get a lighter penalty. Same excuses were used for another friend of ours who was killed in Bursa but she was getting hormone treatment and she had the operation. In other words, she was castrated, which means it was not even possible for her to have  intercourse as active. Moreover, with hormone therapy, one becomes more feminine and as a result no longer produces testosterone, meaning that it is not realistic for them to have intercourse as active. When we proved this with medical reports, for the first time the court did not give a penalty reduction. But now, we no longer need those reports because we learned that a simple blood test reveals hormone levels making it possible to prove whether someone can have intercourse actively or not. I am sure Dora’s murderer will also use those excuses but we will fight.
There were other hate killings in Kuşadası in the past. Is there a specific reason why trans murders happen in Kuşadası?
Unfortunately we got used to it, we are living with the fear of “who will die this year?” Kuşadası is a resort area and the population suddenly increases during summer along with alcohol and drug use. These contribute to the murders but the most important factor is that the police does not do their job properly. But we will follow up on all our friends’ cases and will do our best to make sure their murderers do not get away without punishment. Our friend Nükhet was also murdered in Kuşadası; they tried to get a report claiming the murderer’s instability. When that did not yield results they used the “my turn” excuse. The murderer’s family came to all the trials and sobbed. Maybe one of these days, Dora’s murderer’s family will also say “our child was imprisoned for no reason” because according to them, killing a transsexual is to be imprisoned for “no reason.” But the murdered were our friends. We cry for our friends, not the murderers!
Translation: LGBTI News Turkey
Source: Cankız Çevik, “Tanıdığım transseksüellerden biri bile eceliyle ölmedi,” (“Not even one transsexual person that I know died of natural causes,”) Türkiye’den Şiddet Hikayeleri, 30 July 2013, http://www.siddethikayeleri.com/tanidigim-transseksuellerden-biri-bile-eceliyle-olmedi/