Marriage For All: France restoring its prestige abroad

This is France. Not the bunch of extremist individuals that were in the street on Sunday, marching in the Esplanade des Invalides, turning it into a battlefield. 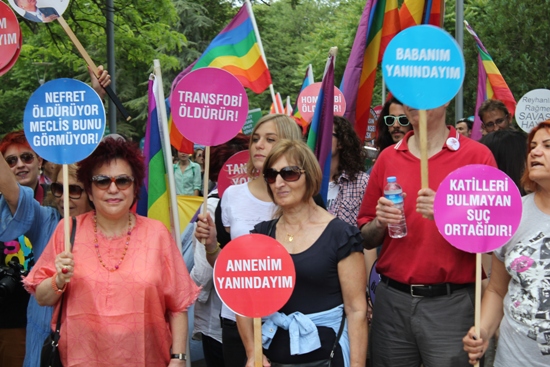 This is France. Not the bunch of extremist individuals that were in the street on Sunday, marching in the Esplanade des Invalides, turning it into a battlefield.
This article has been written by Esther Benbassa, Senator of the Green Party (EELV) in France, for the Huffington Post on May 28, 2013.
According to the figures provided by the Police Prefecture, some 150.000 individuals have gathered to protest against Marriage for All, on Sunday(1). Although the Bill was passed by both chambers of the Parliement and enacted.
The rightwing leader party (UMP) has played with fire trying to take advantage of the hostility of conservative branches of the French society. Such hostility being directed toward an evolution which stands, in fact, for nothing but a fair restoration of equality in our country.
Today, on the frontline among these opponents, far-right radicals were to be found. Neither UMP nor the historical leaders of the « Protest for All » (in opposition to « Marriage for All ») have control over it anymore.  The extremist annoucement of Frigide Barjot’s withdrawal(2), a leading figures of the movement, stands for one of the most significant indication about excesses of the movement.
France, benchmark for the world?
There are all these protestors glorifying the model –greatly imaginary– of the « traditional family », because of religious believes or philosphy. And beyond, there are the right and far-rightwing individuals who have instrumentalised them for a more global struggle against the leftwing majority. All those people, do they have any conscious that the French Marriage for All sets a benchmark for countries where gay and lesbians are not even considered? Henceforth, our reform sets as a guide to activists in their struggle to make their demands heard. Similarilly to the French Revolution which, yesterday, had encouraged fighters for freedom, equality and democracy, beyond our borders.
This parallel might seem bold but still… Turkey’s example is eloquant. On May 17 and 18, I was in Ankara to open the 8th International Meeting Against Homophobia as well as the March Against Homophobia on the 19th  there. Individuals whom I met, from all ages, have been struggling for years to gain a modicum of respect and to be accepted by their families. Although Turkish Law does not forbid homosexuality, LGBT individuals undergo constant discriminations all over the country. Neither the rulling Islamist party –  advocating for a strict return to religious practices – nor the nationalist Kemalist movement, is willing to remedy the situation in any way. No hope thus, from either side. Luckily, there is this French Marriage For All, to bring its tiny bit of support against daily hassles. 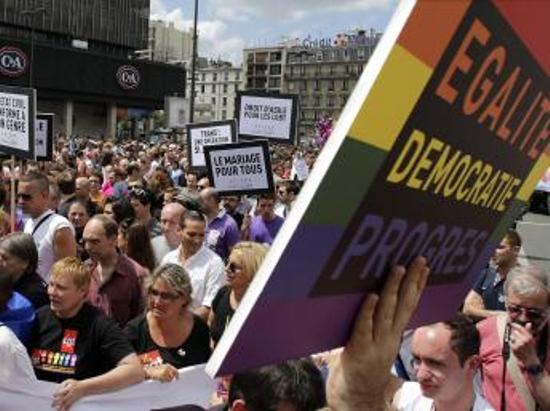 A homophobic Turkey
Turkey hasn’t ratified protocol 12 of the European Convention on Human Rights that includes very clear anti-discrimination provisions. The last legislative measures taken to counter discrimination have deliberatly excluded all references to gender identity and sexual orientation, although such renferences had initially been included in the initial bills submitted to the Turkish Parliament, just as in May 2010.
Not only that LGBT individuals are banned from taking membership into the ruling party (AKP), they aslo face the threat to lose their jobs in any public institutions, education for instance, if their sexuality is « revealed ». Homosexuality is forcibly made silent in every cultural medias, ignored by the current fashionable artworks related to Ottoman history and culture which were actually counting homosexuality as one among their most prominent characteristics. In the army, homosexuality is considered as a psychological disorder and « contaminated » people are not allowed to perform military service. In 2010, the head of “Ministry on Women and Family” had, herself, declared that « homosexuality is a biologic disorder, a sickness that must be cured ».
Debates in the French Parliament have nearly provided us with the same kind of nonsense(3). At least, we haven’t suffered too much of openly homophobic speeches. And the Bill has been passed. In Turkey, homophobia is wide spread and tolerated. Authors of homophobic violence have their sentence reduced when they come up with the argument that their victim has proposed them – or suggested anything about – sexual intercourse. Police is also to blame: LGBTs often have to undergo physical violence if they find themself held in custody. When they don’t, they cannot even lodge a complaint facing the refusal of police agents. As far as transgender sex workers are concerned, they are fined for « offencing public order » or « obstructioning to public circulation ».
In a country picturing family as its core, parents have very much trouble to accept homosexuality of their kids. To the question «In which environement would you never claim your sexual orientation?», %52 of answers are « in the family », around %17 « among relatives ». Most dicriminations seem to come from the side of relatives: %60 of the people declare they have faced expressions of hatred from their relatives and only %32 from individuals in the public sphere.
A day-to-day struggle
In Turkey, about 10 associations are defending LGBTs’ rights in the big cities and are making sure the annual LGBT Pride is carried out. As far as I am concerned, I have been invited by Kaos GL in Ankara, one of the associations whose program receives financial support from the European Union. Kaos GL is a member of the IDAHO International Network fighting against homophobia. The relevance of their speeches, their grassroot action, their magazine (of which quality are second to none if compared to our European standards), the struggle they carry out in abnegation day after day; all those things have blown my mind.
Nevin Öztop, from Kaos GL, who studied in the States, told me about LGBTs’ condition in Turkey, without any tone of victimisation. On May 18th, Eurovision has been censored and banned from Turkish TV programs because it has shown two women kissing. Sic! Ridiculous prudery, indeed. But that is only a little detail among the many tabus pressuring a society that would have benefited more democratization if it had been allowed to enter the European Union. In 2012, didn’t we hear a deputy from the ruling party saying that enforcement of LGBTs’ rights was foreseable only for the 22nd century? The future seems dark still, for another century at least.
Proud to be French!
Can anyone, in such conditions, imagine the hope Marriage For All may have brought? France remains, for many of those activists who have studied in Western universites, a nearby country. A culture which left its mark. Hence this Bill may have created enthusiasm.
I felt proud during those days spent in Ankara, to be French! I found myself dreaming that we had gone back to the « Homeland of Human Rights ». That we were back on stage as fighters for freedom, equality and brotherhood/sisterhood.
My friends from Turkey made me believe in this. I believed them. This is France. Not the bunch of extremist individuals that were in the street on Sunday, marching in the Esplanade des Invalides, turning it into a battlefield.
This article has been written by Esther Benbassa, Senator of the Green Party (EELV) in France, for the Huffington Post on May 28, 2013.
http://www.huffingtonpost.fr/esther-benbassa/homophobie-turquie_b_3341175.html
Translated by: May Bindner
Notes:
1. http://www.huffingtonpost.fr/2013/05/26/en-direct-manifestation-anti-mariage-gay-dimanche-26-mai-paris_n_3338437.html?utm_hp_ref=mariage-gay
http://www.huffingtonpost.fr/news/mariage-gay
2. http://www.huffingtonpost.fr/2013/05/24/mariage-gay-barjot-pas-manifester_n_3338239.html?utm_hp_ref=mariage-gay
3. http://www.huffingtonpost.fr/2013/02/06/video-mariage-gay-le-pire-arguments-ump-contre-projet-loi_n_2629283.html