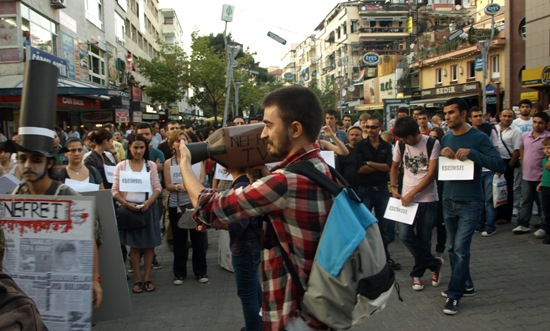 “The scene about sex-oriented and discriminatory speeches within the frame of changing-transforming media” will be discussed in “Media-Communication Forum” held on May 18th in Ankara.
The “Media-Communication Forum” will be held for one day during the 7th International Meeting Against Homophobia with the slogan “From May 1st to May 17th”.
Gülsüm Depeli and Emek Çaylı, members of Kaos GL’s Advisory Board Media-Communication Working Group, called for “Media-Communication Forum” held as a part of the Meeting Against Homophobia.
“The most concrete channel of tendency in becoming conservative”
Depeli and Çaylı, who have been looking for an answer for the questions “What do you think about the scene in media? How do you comment on it?”, pointed out “the tendency in becoming conservative” in the scene about sex-oriented and discriminatory speeches within the frame of changing-transforming media.
“Media is becoming socialized day by day. Especially the internet media, alternative news sources and sharing networks are surely important for us. It appears that we have an opportunity to watch judical process ethnographically and transfer the information via tweet posts tweeted in the court. On the other hand, media is the most concrete channel of oppression, self-censorship, the tendency of getting conservative during the days that over 100 journalists are in jail and columnists make themselves feel trapped. The news has been reported about official complaints by claiming an insult on holly-spiritual value mentioned by the writers on the internet.” 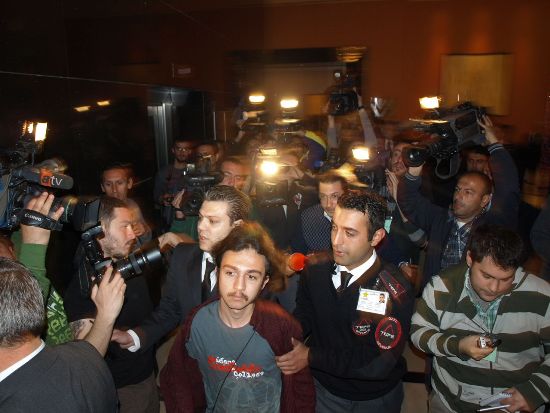 “Whose morality is the morality of media?”
Gülsüm Depeli and Emek Çaylı, professors at the Faculty of Communication at Hacettepe University, assessed television series as “responsible bearer of emotional violence and aggravated family-centered moral codes”.
“Traumatic stories which got into circulation have caused tears; however, which tears of collectiveness construct are they? There is no place in this kind of stories for many gender identities: neither in narrated stories nor with the people crying. Hate crimes or murders which target women in the newspapers have been waiting for being read and sensed in the third pages.”
What are the topics of this forum?
Gülsüm Depeli and Emek Çaylı listed the topics of the forum as:
“What are the current comments on the possessiveness and power structure of media? How do we get involved in media transformation? What does or doesn’t media transfer? How does media transfer the news to the others who are not related with the exact topic? For instance, are minorities, the dispossed, non-heterosexuals or women the “whipping boys” of media? How do discriminatory and homophobic speeches escape the ethic responsibility of media?”
The starting points of the Forum
Depeli and Çaylı, who have pointed out the importance of a discussion on both opportunities and limitations of media within the frame of general conservatism in great detail, arranged the starting points of the forum in order:
. To be able to organize the contact and distance between mass media and us…
. To reveal the discourse sources of obligatory heterosexuality imposed by media about all discrimination primarily by family…
. To analyze and reveal the representation formats of homophobia in media and which ‘representative’ gays and lesbians are in media…
. To be given an opportunity to run our rhymes, to write our own news stories and spread them…
Translation: Sinan A.
Related news:
From May 1st to May 17th – International Meeting Against Homophobia
http://kaosgl.org/sayfa.php?id=11002
Contact persons:
Coordination of International Meeting Against Homophobia:
Ali Erol - alierol@kaosgl.org
Nevin Öztop - nevin@kaosgl.org
Kaos GL Association:
GMK Bulvarı, 29/12, Floor: 6, Demirtepe/Kızılay – Ankara
Tel: 0312 230 0358 Fax: 0312 230 6277