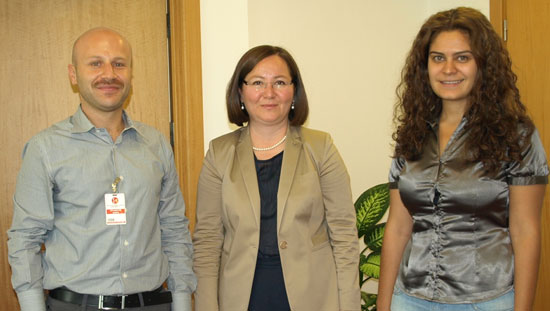 Officials from KAOS GL have met with Dr. Ruhsar Demirel, the Nationalist Movement Party’s (MHP) vice chairwoman, ahead of civil rights report of United Nations Human Rights Committee.
The Covenant on Civil and Political Rights Report for Turkey is set to be released by the United Nations Human Rights Committee in November; and Turkish LGBT organisations have prepared their shadow report as an alternative to the State’s, to present in Genova to the Committee.
The meeting was held in MHP’s headquarters following an invitation by Demirel, who is a member of Committee on Equality of Opportunity for Women and Men; and Health Family Labour and Social Works Committee of Turkish Parliament.
The government, public authorities and political figures have the responsibility to protect gay and trans citizens from discrimination and violence even though some parts of society have prejudices about sexual orientation and gender identity, Demirel said during the meeting.
“If fathers kill their own children, everyone should think about its social cost,” Demirel said. “If we want to deepen democracy and human rights in our country and find a middle ground for all citizens, we should always be open for information-sharing and dialogue; even [we] are unable to convince each other.”
The deputy also touched on the situation of trans-women who works as sex workers. “The situation of trans-women who work as sex workers should be considered in terms of both health and human rights of trans women and public health,” Demirel added.
Representatives from KAOS GL addressed the rising possibility of sexual assaults and hate crimes on trans-women working informally as sex workers, noting that they were always ready to help the legislative processes against hate crimes and discrimination laws.