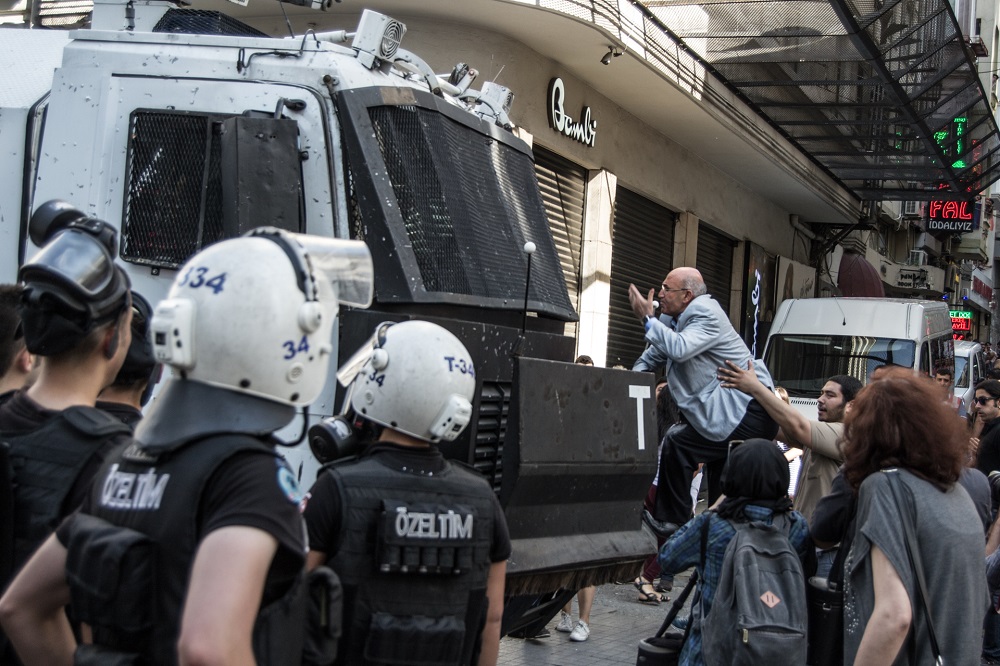 Republican People’s Party (CHP) MP Mahmut Tanal, blocking police attack by getting on TOMA, has talked to KAOSGL.org: “What is TOMA, I mean... They are violating human rights it is my duty to make it stop. Governor of the province and minister of domestic affairs have not answered to my phone calls. Ramadan is the month of compassion but they are violating religion.”
Photo: Cihan Pehlivan, Docu Press Agency
While police attack was happening against Istanbul Pride March, colorful moments took place too. One of the most attention-grabbing moments has been Republican People’s Party (CHP) MP Mahmut Tanal’s getting on TOMA (armed water cannon vehicle) to protect people against homophobia and transphobia.
We have talked about “TOMA issue”, shared in social media much partaking in the headlines of much of newspapers in abroad, and extreme police violence with Tanal. We sent our get better soon wishes to Tanal who get hurt during the March and wanted him to evaluate it.
“There was nearly emergency implementation”
Tanal, saying he was blocked in Taksim Square after he got off his car and his entrance to Istiklal Avenue was precluded, quoted his dialogues with police:
“I said that I am a member of the parliament and referred to them that they were blocking human’s right to travel. There was an emergency implementation yesterday. For emergency implementation to happen, there needs to be the decision of Governor of the Province or the Cabinet, but neither of the decisions happened. While Governor of the Province does not have written decision protests can’t blocked by verbal instructions, the street can’t blockaded by police.
Tanal expressed what he saw when he entered Istiklal Avenue:
“We saw that people wanted to celebrate the day with flags in their hands and rambled peacefully, but police was attacking with gas, pressurized water and plastic bullet randomly. “
“Police can’t camouflage themselves they can’t go out without registration number”
One of the attack-grabbing details during police attacks has been many of police’s having registration number on their head guard. On the same manner, many of police were using sun-glasses illegally and camouflaging themselves. Tanal showed his reaction to this lawlessness by saying that “there were polices hitting people randomly and remaining unnoticed. Police can’t camouflage themselves, how we will know if someone gets hurt seriously and, God Protect, lose her/his life, whoever is the responsible for that? I told that to constables too, otherwise unidentified murders will take place”.
“It is my duty to make TOMA stop”
Tanal, saying that “no one heard us, they kept using gas” talked about the moment he got on TOMA with those sentences:
“People were exposed to police violence. This March is taking place all around the world. It has not been illegalized in anywhere but Turkey. If I did not make TOMA stopped, people will be exposed to much more violence, will be more tormented. What is TOMA, I mean... They are violating human rights it is my duty to make it stop.
“Security’s duty is not tormenting people. There is going on problems of LGBTI socially and they are marching to convey them to public opinion. While security should have avoided attacks coming from outside, they attacked people themselves, likewise; potency should have regarded LGBTI’s problem and found a solution instead of provoking the attacks.”
“Pride march is peaceful and unarmed, for that reason; attacks against this march is a crime according to our Constitution’s 34th law and Europe Human Rights Agreement’s 10thand 11thlaws. This attacks is the doctrine of democratic and law state.”
“Governor of the province and minister of domestic affairs has not answered to my phone calls.”
“I am top of governor of the province in terms of protocol. Why don’t you answer my phone? There is a problem about people’s security. You can’t reject my phone calls while there’s a problem something like that.  If you are not going to answer my phone calls, quit this responsibility! They are acting as they are in responsibility of a political party’s one region.”
“What does March have to do with Ramadan?”
“They told our MP friend that they do not allow due to Ramadan, but what does it have to do with Ramadan? Ramadan is the month of compassion embracing everyone and not marginalizing anyone. They have abused the religion.”
Tanal has reminded that LGBTI are facing with discrimination in education, working and sheltering. Emphasizing that sexual orientation and identity based discrimination is taking place in every field Tanal said that “LGBTI’s spaces to live are getting less and lesser. Society is committing a crime itself by discriminating LGBTI. For all in all, one needs to deal with the problems in this area. I am doing what I can and will keep doing so no matter what the others say. If defending human rights is a crime, then I will keep committing this crime!”
Translated by Simge Şirin