In our “AIDS in Syringe” article series, today, our guest is Semih Özkarakaş. We talked about HIV activism, human rights struggle and current HIV policies with my flatmate and my activist friend and illustrator Semih, with whom I was together at Bursa Free Colors. 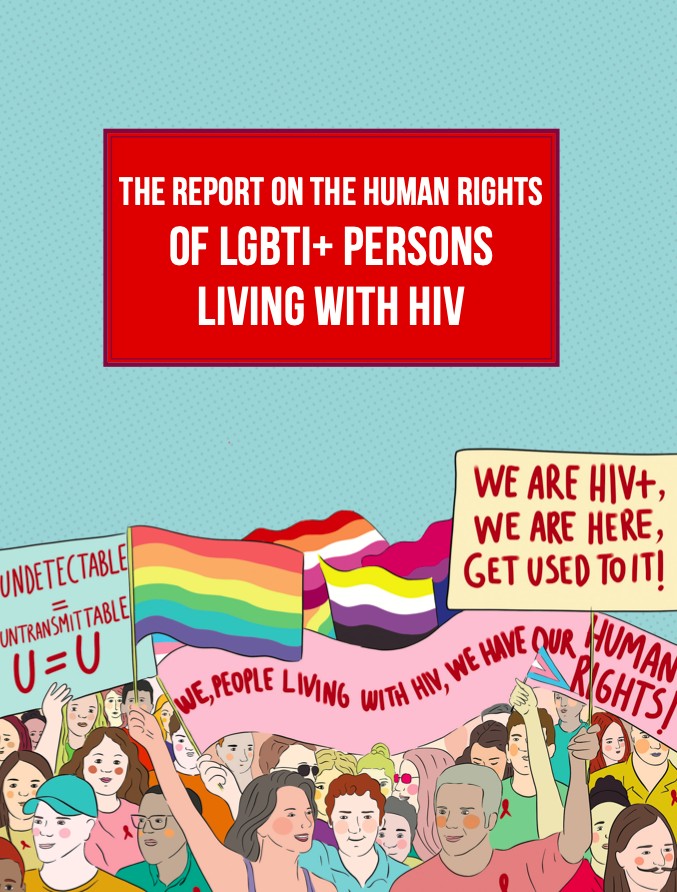 You have been doing LGBTI+ activism in the field for a long time, but at the same time you define yourself as an HIV activist. Can you briefly talk about yourself and how your awareness of HIV is raised?

Since 2013, I have been doing LGBTI+ activism at Bursa Free Colors LGBTI+ Association. I work in the field of HIV and transfeminism. I have a pet partner named Galya. I am vegan. Also, I am a fresh illustrator having drawings in queer slang-Lubunca.

If I set myself a milestone for HIV awareness, that milestone could be when we started living together with you, I had an idea about HIV before this. Madonna was one of the reasons I had an idea about it. Madonna’s 1989 album “Like A Prayer” had a brochure about HIV. When I bought the vinyl of that album in the early 2000s, my awareness started when I saw that brochure in the box. With this brochure, I can say that I started my research on HIV. In the same period, I watched Madonna’s documentary “I Am Because We Are” which is about Madonna’s travel to a geography where HIV is a destiny in order to take action to do something in the field of HIV there. All of this allowed me to read more and made a research about HIV.

When I started reading and thinking about the Queer Theory, then my awareness of HIV got raised further. When I started thinking about HIV, making HIV policies for those living with HIV, it empowered me about HIV. While I have been thinking about HIV for as long as I can remember, I put myself in the middle of the possibility of living with HIV, not in the middle of a healthcare crisis. I think and I even know that HIV is a human rights issue. The United Nations High Commissioner for Human Rights and Joint United Nations Program on HIV/AIDS: UNAIDS say that this is not a healthcare issue but a human rights issue.

Then when I started activism in 2013, I realized that; as the litmus of the leftist movement is the LGBTI+ persons, and the litmus of the LGBTI+ movement is those living with HIV. What encouraged me to do HIV activism the most was that the LGBTI+ movement or LGBTI+ subjects, who show all kinds of solidarity when it comes to access to rights, did not go beyond the suggestion of using condoms; when it comes to HIV. When they are together they never talked about how safe the areas are for HIV-positive persons and how these can be accessible to HIV-positive persons. While talking about human rights and the inclusiveness of human rights, why HIV was not addressed within this discourse axis, I was also questioning this. I can say that I started to produce discourses about HIV with this motivation.

Also, if you live with someone living with HIV, you are also HIV positive in the eyes of the public. Because if the society offers the range of discrimination, stigma and hatred to HIV-positive people, the first demand is that the relatives of the HIV-positive person should also exclude that person. If they do not exclude them, even do embrace them more, this time it targets the HIV-positive persons and their relatives. Because society today believes in this outdated myth that “HIV is an epidemic”, instead of the reality of U Equals U (U=U); “That is why you, your relatives, those who work in this field and those who produce policies have to face certain discrimination” it says. Also, HIV/AIDS stigmatization is still a package. In the sequel, the positive person has to fight the suspicion of homosexuality, because an article published in New York Time in the early eighties first called this situation as GRID, in other words, gay-related immune deficiency. Although nearly forty years have passed, the image of homosexual cancer in the cultural memory has not been changed. For this reason, straight people, for example, cannot come out to their families, their spouses or partners. For example one of my counselee’s had asked the doctor; “I am not gay, how can I be HIV positive?”. When I heard this, I recalled Kaos GL’s motto, “The liberation of LGBTI+ persons will also liberate heterosexuals”. For example, because I am a roommate with someone living with HIV, the thing that is thought for me is that I will of course be “infected” with HIV at some point. Since I started a family with someone who is HIV-positive, they see it as a “victim of fate”. Think about it, they think that love can only be established through being the victim of fate. Here, people like to fictionalize all the myths about HIV inherited from the eighties. Then they live in a irrational panic.

So by anticipating all this, why did you choose to live together with someone living with HIV? Would not the other option be easier for you? You are also a person suffer from hypochondriasis. What would you like to say about this situation?

I thought these prejudices were overcome. Or let me correct myself indeed, while I have the spirit of the times, I have come across the fact that people are behind the times and blindly believe in outdated myths. But all this does not change the fact that I can choose who I want to live with, that I have updated information, that HIV is a human rights issue, that I can face and overcome prejudices that I may face.

Yes, I am a hypochondriac person. Oh, I come out and relieved now. In other words, I believe that I am sick and live with a constant anxiety disorder. My obsessive-compulsive disorder is constantly whispering my ears to accept death, but HIV is a chronic health condition today. With one or maybe more than one drug taken a day, the transmission characteristics of HIV disappears and the situation of causing harm to the person is eliminated.

Actually, I take HIV as a human rights issue for many reasons. HIV has been controlled by all religious, political institutions since the first days of its emergence, and when AIDS was turned into a crisis, states and societies preferred stigmatization and discrimination as the first step. At the end of the day, they applied two methods to combat this crisis; criminalizing homosexuals and sexuality. Subsequently, they created HIV-positive predators through the media, saying, “HIV-positives are killers that spread viruses”. In this process, this has become a human right issue for me because they think of AIDS as a “divine punishment”, they do not promote sexual education, they do not advocate and promote the use of condoms, they exhibit moralistic attitudes about sexuality, the states do not establish the right to obtain accurate information, there are violations of fundamental rights.

For example, in the early days, healthcare sector and its professionals thought about other patients instead of worrying about the health of HIV-positive persons. In this process, while subjects living with HIV had to be admitted into the centers, religious representatives were allowed to speak. The hatred of the religious representatives was heard. Since ethical and rights-based approaches on the right to access to health have not been widespread, even today, the knowledge of a healthcare staff consists of the myths of the eighties. Human health and access to health are among the most slippery slopes and in a healthcare situation society leaves the burden on people. In the HIV issue, they separated the people they saw as “sick” from the “healthy” by stigmatizing them. They missed the fact that the health condition of everyone can change at once and that health should be established with the principles of equality in terms of human rights. Punishing someone who have positive HIV status and imposing morale of contagiousness on HIV is an attempt by authorities for holding these persons accountable in order not to take responsibility by themselves. Discrimination policies are produced as a result of not being able to produce rational policies regarding prevention, treatment and most importantly PReP and PeP from past to present.

Considering the process from the times when condom advertisements were banned in Europe in the past, today, the fact that the Mersin Municipality does find condoms distributed with the cooperation of the Ministry of Health against ”the customs and traditions of the society”; and the fact that the anonymous test center is targeted in the press and closed down, shows us that the enjoyment of most basic human rights are still prevented.

It seems to me that they are very afraid of the dissemination of sexual health knowledge. Using AIDS as the most important moralist element of oppressing sexuality is also easy for them. So the methods they use are as follows; lets not distribute condoms and nobody do sex. If it is to be done, it should be done only in marriage and monogamy. They use AIDS as the most effective tool of suppressing sexuality. The result is, of course, disappointed. In the field of human rights, nobody or anywhere can produce a policy without promoting the rights of HIV-positive persons. No state, institution, sector, civil society, movement, or any other places I cannot count now, that does not include those living with HIV, cannot gain its own legitimacy.

What are your opinions on the recent HIV discussions?

There is a myth that has remained unchanged since HIV and AIDS emerged; “A HIV positive person is either a victim or a potential killer!” So they claim and dictate that HIV-positive persons have to share their status. At the time, a radical-rightist French politician made a policy based on the need for AIDS tattoo on the body of HIV-positive persons for saving other lives. Is not this practice very familiar? It is Hitler’s fascism. Years later, in this discussion today, the parties are divided into fascists and their opponents. They threaten those who do not share with the law and the state. They do this with the aggression comes from their ignorance. Someone who says that he is a lawyer is targeting an open HIV positive person, and someone who is organized in the feminist movement and the LGBTI+ movement can get a microphone on hand and says, “You have to tell the state”. Unfortunately, in a geography where hate speech and ignorance are legitimized under the name of freedom of expression, these discussions continue in this way. In fact, this cliché tweet is shared once a month; “There were ultra-progressive advocates on this site for a time who argued that they have the right not to share that they are HIV positive, where are they now?” We are here my love, so what?

Finally, is there anything else you would like to add?