No investigation permit for the torturer police: You cannot acquit Hanifi Zengin!

İstanbul Governorship didn’t permit investigation of the police chief Hanifi Zengin, who harassed LGBTI+s and used violence against them at the Pride March. Feminists and LGBTI+s, who made a denunciation, say #YoucannotAcquitHanifiZengin. 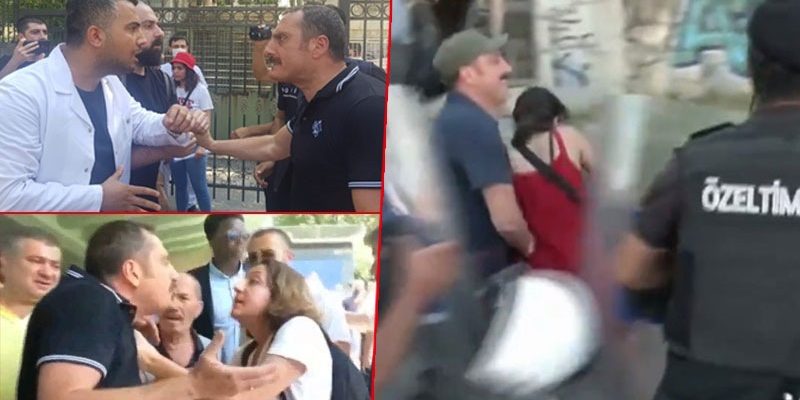 İstanbul Governorship didn’t permit investigation for Hanifi Zengin, who became an issue due to torture against LGBTI+ demonstrators at 20th İstanbul Pride March and journalists.

Having come out of the video recordings regarding harassment of a woman at İstanbul LGBTI+ Pride March by İstanbul Directorate of Security Branch Director Hanifi Zengin, feminist had made a denunciation about him by saying: “We trout out the harassment, violence and torture we were exposed to at 20th İstanbul Pride March.” to İstanbul Chief Public Prosecutor’s Office.

Despite the video recordings displaying torture, İstanbul Governorship didn’t permit investigation due to the “lack of concrete evidence”.

“Kadınlar Birlikte Güçlü” (Women are Strong Together) gave a start to an action on socal media with the hashtag #HanifiZenginiAklayamazsınız (#YoucannotAcquitHanifiZengin). Feminists and LGBTI+s made a call against torture as follows:

We, as feminists and LGBTI+s, had made a denunciation about İstanbul Directorate of Security Branch Director Hanifi Zengin, who harassed us and used violence against us at the last Pride March and at many following demonstrations, as seen within the scope of video recordings and photographs, in July. Some similar denunciations were also made by journalists and health workers. A few days ago, İstanbul Governorship disclosed that they didn’t permit investigation for the torturer police. Despite of all photographs and video recordings, they were able to claim ‘lack of concrete evidence’ ridiculously. We made an objection against the decision yesterday. We know that investigating a torturer will disarrange all the torturers in the police station, this is why they don’t let it. We address İstanbul Governorship: We will not let you either acquit torturers, nor protect perpetrators. We will call the torturers, who are encouraged by the shield of impunity of the male state, to account for. Your attacks targeting those who carry their rebellion to the streets, come short to women, LGBTI+s, journalists, health workers, advocators and Saturday Mothers! You may become hardened to protect torturers; however, we will continue to fight till there are no more officers who prefer torture, instead of performing their duty, who harass and use violence against advocators instead of preventing women murders, hate crimes and violence, at the public institutions. We are going to make Hanifi Zengin and the like judge. We also address the prosecution: We are sure that the Prosecutor also knows very well that there is no need to take permission for investigation in case of torture.

The decision of the Governorship is invalid; preventing the judgment of torturers is torture and a crime. Perform your duty, judge torturers!”