A night club in Eskişehir didn’t allow two trans women and a trans man to enter into the club. Police officers just sat back and watched the assault by the night club’s security personnel. 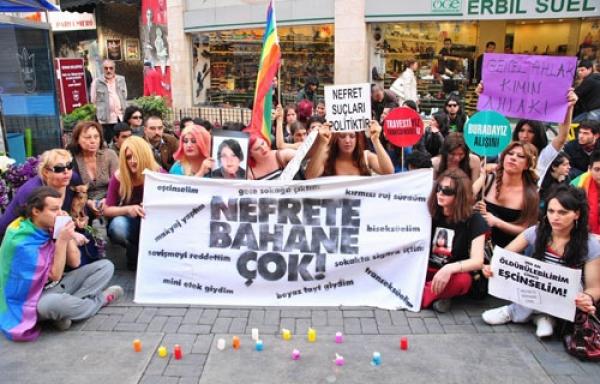 A night club in Eskişehir didn’t allow two trans women and a trans man to enter into the club. Police officers just sat back and watched the assault by the night club’s security personnel.

The night club 222 Park in Eskişehir didn’t allow two trans women and one trans man to step inside. During the late hours of March 5 and the early hours of March 6, around at 00:30, two trans women, one of whom is a member of the Pink Life LGBTT Solidarity Association Management Board, and one trans man who is a member of Kocaeli LGBTI+ were stopped from entering the nightclub.

According to the statements of the trans people who were exposed to discrimination, it happened as follows:

Discrimination at the club

The security personnel at the entrance wanted to move the three people away after saying “we are closing the club”. When the personnel were told “this is a club that we came to before. You are not allowing us just because you want to do so,” they answered “you can go in, but your friend cannot. We let in whom we want to and don’t let in those we don’t want to.”

Police officers joked around with the security personnel

After being stopped from entering the club, the trans people notified the police. The police officers who came to the scene joked around with the security personnel of the club and said “they let in whom they want to and not let in whom they don’t want to.”

Assault by the security personnel

Then, the security personnel assaulted the trans people. The police officers didn’t stop the assault, handcuffed the trans people’s hands behind their backs, made them get in the police car by force, and took them to Yunus Emre Public Hospital. The police officers ridiculed the sexual identities of the people who were assaulted. When the activists tried to videotape the things they faced, the officers hindered them, seized the camera, and deleted the recordings.

Handcuffing behind their back!

The trans people were examined at the hospital while handcuffed behind their backs. After the examination, they were taken to the police station in the same car and gave a statement there. At the police station, firstly the security personnel’s and then the police officers’ statements were taken. Lastly, the statements of the trans activists who were exposed to the discrimination and assault were taken. Pink Life and Kocaeli LGBTI+ declared that they will follow up the process.

Prohibition of discrimination in access to goods and services

“Goods and services is the general name for all kinds of goods and services regarding  commercial and personal consumption in daily life. For example, a lawyer provides a legal counselling service for a fee. A pharmacist gives medications in return for a certain amount of money. Whether or not the provider of a good or service is a public institution is not a matter in terms of this right or prohibition.”

“The kinds of forms of buying and selling activities in daily life, such as the relationship between a landowner and a tenant, the transportation service to be received from a taxi driver, the entertainment service at a café, the service from a bathhouse, constitute the topic of the right to never be subjected to any discrimination in access to goods and services.

“What this topic means for LGBTI+ people is that people refuse to provide goods and services to LGBTI+ people due to a homophobic or transphobic motivation. In other words, LGBTI+ people cannot make a buying and selling transaction that every person can make, or LGBTI+ people are prevented from renting a house that can be rented by anyone, just because they are an LGBTI+ person; all these are examples of discrimination against LGBTI+ people.”