Protesters with rainbow and trans flags have been detained for the 4th time! 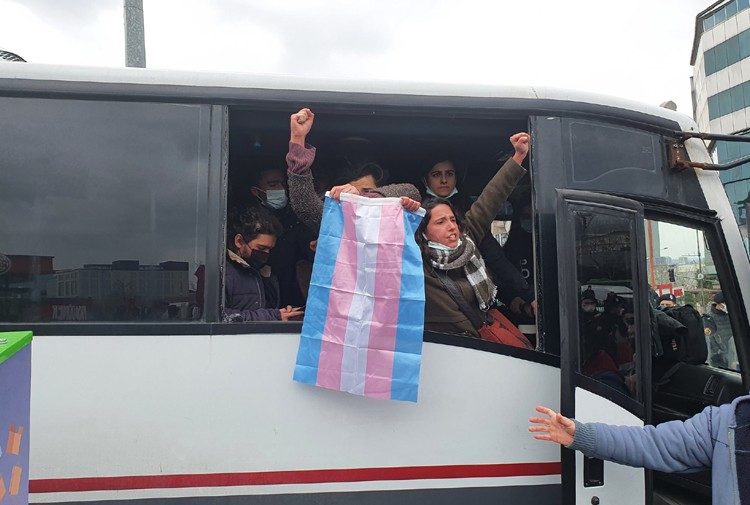 Yesterday (March 25) four students were detained in the Hisarüstüstu Neighborhood, where the Boğaziçi University is located, on the grounds that they were "carrying an LGBTI+ flag". The disciplinary investigation against a student carrying a rainbow flag during the protests against the assignment of the rector was on yesterday too. N.D., who raised a rainbow flag during protests attacked by police on February 1, was targeted by a disciplinary investigation that says "you went upstairs and waved the LGBTI+ flag". Yesterday, N.D. was to give a statement in the scope of the investigation.

Yesterday police attacked students trying to enter the university to support their friends. In Hisarüstü, where Boğaziçi University is located, police detained four people on the grounds that they were "carrying an LGBTI+ flag".

"We don't care what you are, this flag is forbidden." police said, according to Boğaziçi TV. However, the police officers did not explain why and how the LGBTI+ flag was banned, and arbitrarily took away the flag.

Students met outside the university's North Campus to protest the detention of their friends. Police surrounded the students and tried to prevent the students from coming together, citing the outbreak. The students chanted "Let our friends be released" and "We are not silent, we are not afraid, we do not obey."

Police attacked students protesting the attack on their friends and also kicked a dog. At least five students were detained in the police attack.

Following all this, several university students who went to the university yesterday to support their friends were also attacked by police and detained. LGBTI+ activist Havin Özcan is among those detained.

Today, at least 35 students who went to İstanbul's Çağlayan Courthouse to make a press statement and to protest the detention of their friends were detained.  "Human dignity will defeat torture" chanted the detained students after excessive violence of police. There are journalists among those detained.