"The LGBTI Movement Did Not Begin With Gezi"

LGBTI and feminist activists from Macedonia, Egypt, and Turkey shared the resistance practices from their countries at the 3rd International Feminist Forum. 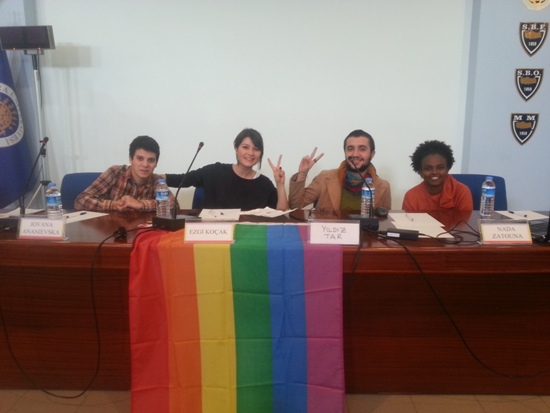 LGBTI and feminist activists from Macedonia, Egypt, and Turkey shared the resistance practices from their countries at the 3rd International Feminist Forum, coordinated by Kaos GL and KASAUM as part of their 20th anniversary events. During the third panel of the forum’s first day on 15 March, Nada Zatouna from Egypt, Jovana Ananievska from the Macedonian LGBTI Support Center, and Yildiz Tar from Turkey’s Kaos GL spoke.
“Women’s Organizations are Scared to be Called Feminist”
In the panel moderated by Kaos GL’s Ezgi Kocak, Jovana Ananievska began by pointing out that the feminist movement in Macedonia is hindered by women’s organizations. She said, “Just as I was hesitant to talk about sex before accepting my sexual orientation, women’s organizations are scared to be called feminist.” The LGBTI Support Center activist said that NGOs were negatively affected by the withdrawal of international funding after 2001.
Ananievska said that despite the existence of women’s organizations that deem homosexuality to be against traditional values and a perversion that harms children, she is hopeful because of the existence of feminists who work alongside LGBTI people against militarism and nationalism.
Tahrir Square: The Center of Sexual Violence
Nada Zatouna used a visual presentation to talk about efforts to mainstream feminism and social sexuality issues. Zatouna highlighted a feminist school, training on sexuality, and workshops around taboo issues which have been established since last year. Zatouna also mentioned a statement condemning sexual violence in Tahrir Square.
The Egyptian activist shared the fact that the Islamic authority holds women responsible for some gang-rapes, and said that it is not possible to work openly as an LGBTI activist in Egypt.
“The LGBTI Movement Did Not Begin With Gezi”
Yildiz Tar began their talk by saying, “I want to first remember Berkin Elvan who was added to the list of children killed by the state,” and continued by telling the history of the LGBTI movement, which is often wrongly assumed to have begun with the Gezi Resistance, from the 1980s. Tar said, “Instead of asking what Gezi contributed to LGBTI people, we need to ask what LGBTI people contributed to Gezi.” Tar pointed to the fact that discriminatory discourses started to change with the resistance movement and mentioned a photograph from 1987 depicting trans women and gay men on Gezi’s stairs in a hunger strike against police violence.
The Kaos GL reporter talked of the relationship between war and heteronormativity, and policies of destruction, denial, and assimilation used against LGBTI people.
Kaos GL’s 3rd International Feminist Forum was supported by SIDA, Norwegian Embassy, Urgent Action for Women’s Human Rights, Frontline Defenders, Mediterranean Women’s Fund, and Ankara University’s KASAUM.
Translation: LGBTI News Turkey