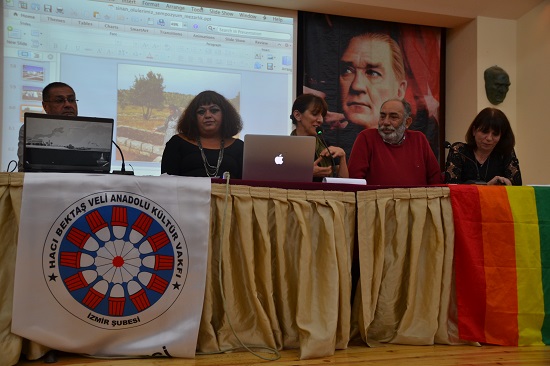 Transgender activist Gani Met, Sinan Demirkan as relative of a deceased, Anatolian Greek Teodora Hacudi and Pakrat Estukyan from Armenian newspaper Agos, discussed dying as the other: Is our mourning going to be different, too?

At the third session of the symposium of ‘’ Our Lost Ones and Us // Dying As The Other ‘’ organized by Kaos GL Association, Hacı Bektaş Veli Anatolian Cultural Association and People’s Bridge Association, Gani Met from Pink Life LGBTI Solidarity Association, Sinan Demirkan as relative of a deceased who had to come İzmir by forced migration, Teodora Hacudi who is one of the forty Rums in İzmir and Pakrat Estukyan from Agos, shared their experiences.

Here are the highlights of the speech:

Gani Met: Transsexuals are in prostitution business, they sign and on the other hand they have funerals in their houses. I’m forty-five years old and I have seen so many funerals for my age. Just as your body isn’t able to fit in this huge word, there is no place after death, too.  I even do my mourning in silence. They didn’t accept the halva I gave. What do you want from my dead body? Transsexuals don’t have the luxury such as Cemevi, mosque. It’s enough to be buried. It’s enough to bury it before other family members see. Also, transsexual bodies can’t be found in normal form. Our bodies are torn apart. It gets torn apart, cut into pieces.

We too have mothers. They cry secretly when we die. They cry without staking a claim on us as someone who is not even able to say our names. I’m dead, you didn’t let me live, at least bury me at once. Imam doesn’t bath the deceased, grandfather doesn’t want it, family doesn’t stake a claim on the body.  I don’t want to die like how I was born, I want to die like how I lived. They perform my funeral prayer and call me a man. I’m dead, please don’t do it now.

As I said I’m someone who have seen so much death, lately my father passed away. They didn’t let me participate. Transsexuals can’t even stake a claim on their funerals. When we die, if family doesn’t want us, LGBTI associations try to perform a funeral. Yet, most of the time they are not allowed to do.  Our bodies get buried in silence, unbeknownst to anyone.

On the other hand, while everyone is mourning, I still have to work for my living. I also lost friends at Ankara Bombing but I had to work that evening. My issue is somewhat different than other people’s issues. You didn’t see me living or getting beaten. The mentality which doesn’t see it, of course will be afraid of our dead bodies. We are not equal in life, aren’t we going to be equal at death, too? Can’t my mother’s mourning be aloud? Is she has to hide it?

Sinan Demirkan: We received the information of my brother Metin Demirkan’s death in 1999, at the Bagok Mountain. We went Mardin Nusaybin. We requested body but it was rejected. There was a call at the International Day of Peace, 1 September 2003. We were told to go Nusaybin. There were lots of tanks and armored vehicles at the military zone called Botaş. They confronted us but at last, they let us in. At that night we performed a funeral. The graveyard was bombed by state, only after two days.

To reconstruct the graveyard, we went there with Muş MP, Demir Çelik and mothers. They attacked us with heavy automatic weapons. There was not even a single DNA remain in there, anyway. That graveyard is for all of us, no matter who lies down in there.

In the last period of war, state attacked that graveyard again. They destroyed whole graveyard with mines including the mosque and camellia. They accused us of hiding guns in graveyard. Why would we do that? This is our graveyard.

Once again we went there to see the final situation with HDP (Peoples’ Democratic Party) MPs. We only wanted to visit graveyard. We were begging only to see graveyard. They didn’t let us in because that zone was declared as safety zone. We performed a sit-in protest for four hours and broke up. The following day, I went there in stealth. I can make nothing out of it but what did you want from thirteen years old bones?

‘’The victory they call was oppression to me’’

Teodora Hacudi: What can I say, I was really abstained when I was invited to participate in this symposium. It was not because of me, it was because of the risk of making a mess for my community by the words I say. They told me, be visible. I thought. Actually I’m very visible. I’m one of the last two thousand Rums in Anatolia. As a matter of fact, I’m very visible.

If you are Rum in this territory, everything you haven’t done will be accepted as you have done. Whenever I tried to express my emotions, even my close friends shut my mouth. Maybe they were right on their side. The victory they call was oppression to me.

‘’Armenians renounced their religion to die in their homeland’’

Pakrat Estukyan: I liken Armenians to cats. Dogs are loyal to their owners, cats are to places. That’s something Armenians have. You can say it patriotism. Lots of Armenians renounced their religion to die in their homeland. If there are Islamized Armenians in this country, this reason lies behind it.

The other efficient cause is the following generations never lie under the same sod. Lots of family knows that three generations’ graveyards are in different cities.

Why Armenians graves are covered with four meter long walls? Why it cannot be seen at Muslim graves? Normally it was supposed to be seen. But if the graves of non-Muslims are covered with walls to protect from attacks, no one can talk about toleration. That word contains the trouble in itself.