Sexuality and Gender in Utopias

In the second session of the 6th Feminist Forum, Yasemin Temizarabacı and Belma Fırat discussed the forms of Sexuality and Gender in Utopias’. 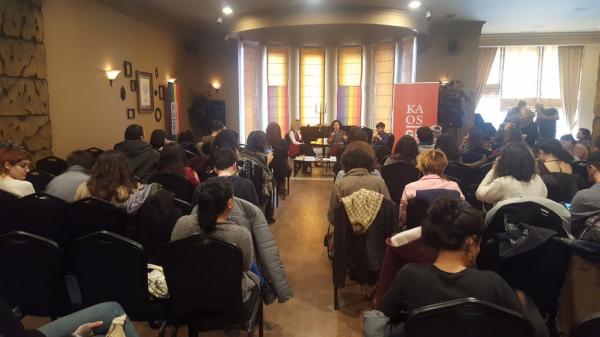 In the second session of the 6th Feminist Forum, Yasemin Temizarabacı and Belma Fırat discussed the forms of ‘Sexuality and Gender in Utopias’.

In the 6th Feminist Forum organized by Kaos GL Association, Yasemin Temizarabacı and Belma Fırat told about the sexuality and gender in feminist utopias and distopias.

“Although utopias cannot change the World, they give us hope”

In the beginning of the second session of the Forum, Yasemin Temizarabacı took the stage firstly. She mentioned that utopias as literary genres cannot change the World, but they can give us enough hope to change the World.

Indicating that first utopias written by women in 1800s were feminist texts, Temizarabacı added that in those texts motherhood, reproduction and sexuality were redefined. Then, she mentioned the feminist utopias and representation of utopic societies without men.

During her speech, Temizarabacı touched upon the most popular feminist utopia writer such as Katharine Burdekin, Charlotte Perkins and Ursula K. Le Guin, and then she mentioned the dystopias which are the texts strengthening the resolution of struggle by showing a fearful World.

Talking about the language of the utopias at the end of her speech, Temizarabacı remarked the necessity of creating a new language by destroying the patriarchal one.

“In a genderless society, there is no place for marginalization”

The second speaker Belma Fırat began her speech to talk about the redistribution of property and responsibilities within the family in feminist utopia and dystopias, and to express that holy motherhood appears in the texts where the property and families are exalted.

Hope and Twilight of Academy was discussed in Feminist Forum