Many countries in our region struggle with nationalism and militarism. This breeds homophobia. Therefore it is particularly important to form networks and to collaborate, says Nevin Öztop.

Last week the Swedish capital Stockholm was covered in rainbow flags when Stockholm Pride celebrated the lesbian, gay, bisexual, transgender and queer community. The festival contained seminars, workshops, music, parties, political debates and what many consider the highlight: the parade. Turkish Kaos GL has-previously participated in Stockholm Pride with seminars about the situation for LGBT-persons in Turkey.
- Chaos is a positive word to us. It refers to the first primitive formation of earth when nothing was superior to the other. When all was equal, says Nevin Öztop at Kaos GL.
Nevin Öztop explains that Kaos GL is organized as a network for people against homophobia. The structure makes it possible for people to participate without making their own sexual orientation public.
- We still have few registered members, since many do not want to be on our membership list. A lot of our members are feminists. This shows how not so easy it still is to be open in Turkey, says Nevin Öztop.
An important way to influence the public opinion is through the organization’s magazine that is supported by the Swedish Federation for Lesbian, Gay, Bisexual and Transgender Rights (RFSL). The magazine has been published since 1994, despite strong opposition at times. Today it is spread throughout the country and contributes to raising awareness and helping people to realize that they are not alone.
In 2001, a small group of Kaos GL-activists took part in the demonstrations on Labor Day, the 1st of May, in Ankara.  Carrying a rainbow flag, they demanded equal rights, and for the first time Kaos GL were broadcasted on TV.  A few years later, in 2005, Kaos GL became the first LGBT organization to gain legal status in Turkey.
- These are two important milestones. At first the authorities denied the status. Instead they filed a lawsuit to close down the association with the argument of “general morality”. But after campaigning and international pressure the case was dismissed, says Nevin Öztop.
T 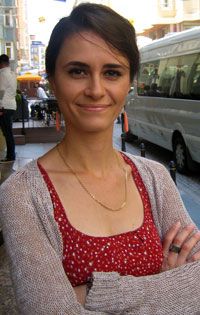 oday six LGBT organizations are registered in Turkey, but the discrimination continues. In 2010, the country’s Family Minister Selma Aliye Kavaf called homosexuality a disease that requires treatment. In response, Kaos GL arranged a silent protest. During a speech of the Family Minister, Kaos GL activists raised signs saying "Apologize!", which was broadcasted on TV.
There is no law in Turkey which explicitly prohibits discrimination on the grounds of sexual orientation or gender identity and Turkey had the highest rate of hate crimes against LGBTs out of 47 Council of Europe countries in 2010. Kaos GL has created a website where LGBT-persons can report violations and the page has become impossible for authorities to ignore. The website is blocked in many places such as universities, internet cafes and was also previously blocked in parliament.
- An Ankara politician, Aylin Nazliaka of CHP, who could not access the webpage addressed the Prime Minister in person, and asked why the page was censured. After that it can be reached from the parliament, says Nevin Öztop.
Kaos GL cooperates with movements in other countries in the region within a Regional Network Against Homophobia.
- Many countries in our region struggle with nationalism and militarism. This breeds homophobia. Therefore it is particularly important to form networks and to collaborate, says Nevin Öztop.
In its efforts to strengthen LGBT rights in Turkey, Kaos GL cooperates with RFSL and the cooperation is supported by the Olof Palme International Center.
By: Annika Torstensson
Photo: Photo of Nevin Öztop, Annika Torstensson, other images: Kaos GL’s archives