Great news from Sweden! It was the prime minister himself Frederik Reinfeld who greeted yesterday 450 LGBT activists from 100 countries at the opening ceremony of 2012’s ILGA world conference, making history as the first prime minister ever who does so. 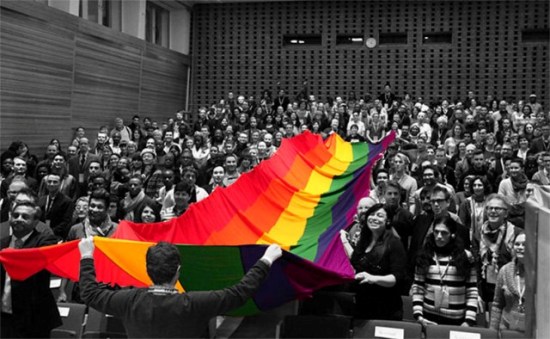 Kristi Pinderi and Xheni Karaj of Albania are reporting from Stockholm…

Great news from Sweden! It was the prime minister himself Frederik Reinfeld who greeted yesterday 450 LGBT activists from 100 countries at the opening ceremony of 2012’s ILGA world conference, making history as the first prime minister ever who does so.

This fact along with the large number of the participants makes this conference the biggest event in global history in LGBTI.
Until December 16 participant will discuss about the strategies of activism in the coming years.
The speech of the prime minister of Sweden was followed by applause and standing ovation from hundreds of participants.
“Discrimination and stigmatization is unacceptable for me. This is a matter of freedom and part of our work to build an open society. Human Rights are universal and they should be applied in the same way in all the countries in the world.”- said Mr. Reinfeldt.
He accepted that at least these 5 years the progress in the advancement of the rights for lesbians, gay, bisexual, transgender and Intersex persons has been fast and easy in many places, but added that ‘’I will be humble in admitting that there is still much work to be done in the global level”, referring to the imprisonment of this community or the death penalty in many countries in the world. He added that there is much work to be done in Sweden as well.
“A while ago I met a 15 year old boy in a city in south of Sweden who told me how he was harassed publicly in the street. He was afraid after this to express his feelings openly. These are fears that we should not ignore anymore”, continued the prime minister.
He also suggested that now on the activism should focus more on education. ‘’We should focus on education”, he said, “because, the laws and legislative work is not enough. We need to build confidence and help our young people to have more self esteem and not to be afraid anymore”. 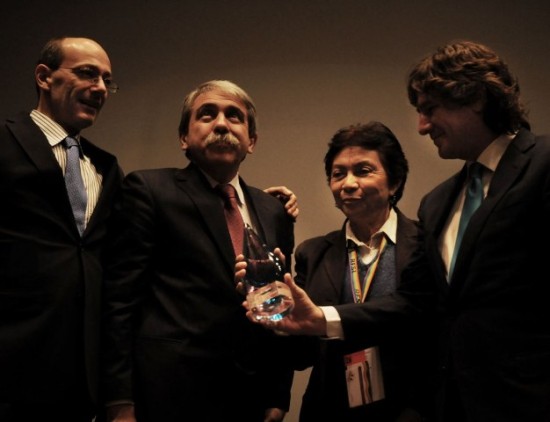 The co-chairman of ILGA Renato Sabbadini was moved by this speech. ‘’Later or soon, every Prime Minister in the world will have to follow the example of the Prime Minister of Sweden.”, he said.
Festive and celebration moments made this ceremony an unique one. Especially the Brazilian band Yakambe created a very special atmosphere when at one point everyone stood up dancing for several minutes.
The vice president of Argentina Amado Boudou was then invited at the stage to accept the ILGA Prize awarded to the President Her Excellency Cristina Fernandez de Kirchner, on her behalf.
ILGA, the organization umbrella that is now composed by more than 950 organizations from all the continents gave the ILGA price to de Kirchner for her personal efforts to improve the lives of LGBTI and after her country initiated and drafted in 2008 the UN resolution signed by 66 members states including Albania, that urges the decriminalization of homosexuality in those states that still criminalize it.
The secretary general of Amnesty International also complimented this ceremony.
During the evening the 450 participants were guests of the Mayor of Stockholm. They were invited in a reception at the City Hall just two days after the famous Nobel Banquet.
The LGBTI activists entered the Golden Hall, an extraordinary luxury and magnificent piece of art and architecture were the wall are decorated with some 19 million golden pieces that forms a mosaic with paintings from the entire Swedish history.
‘’It is for the first time’’, explained the deputy major, ‘’that we welcome so many special LGBTI activist in this hall”.
Source:
http://historia-ime.com/en/english/124-swedish-prime-welcomes-the-biggest-global-conference-of-lgbti-in-the-history.html