Symposium Against Discriminations on the Human Rights Week

Kaos GL Association will organize 5 symposiums this December in Ankara during the Human Rights Week (10-15 December) on the LGBT rights struggle and social rights. 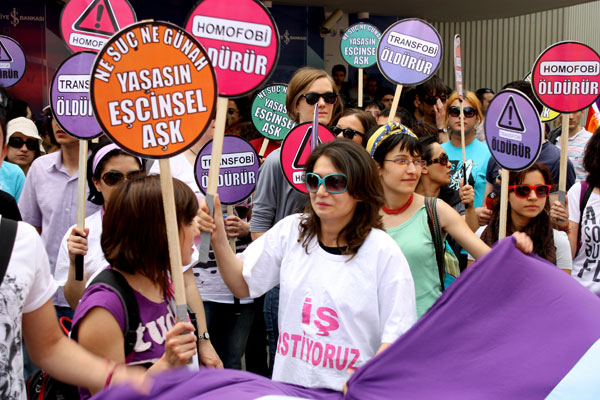 Kaos GL Association will organize 5 symposiums this December in Ankara during the Human Rights Week (10-15 December) on the LGBT rights struggle and social rights.
Aiming at strengthening the human rights struggle and solidarity against the heterosexist practices lesbian, gay, bisexual and trans (LGBT) people face in their daily lives in Turkey, Kaos GL highlighted following points in its announcement for the symposium:
“Lesbian, gay, bisexual and trans people experience serious discriminations in every aspect of life. Apart from the violations caused by the State, unfortunately, there is no consensus among human rights movement against discriminations and violations. Not only this causes separation among human rights movement but also it prevents relating to and organizing within the struggle against discrimination.”
Homophobic discrimination as the hate ideology!
“Considering the apparent relation of homophobic and transphobic discrimination with violence and the current level of discriminatory violence against LGBT people in our country, it is clear that the homophobic/transphobic violence should be tackled regarding its relation to hate crime. This makes it obligatory to discuss discrimination in parallel with the “hate” ideology.
Besides being discriminated and our rights being violated, we are being deprived of our freedom of expression and of organization. This prohibition is a way of discrimination itself and most of the time our presence as human rights advocates is perceived as a threat.”
Joint struggle against discriminations for freedom!
“As Kaos GL, since 1994 we have drawn attention to the fact that discriminations and ideologies feed on one another and we have empasized that a joint struggle is a way to freedom with our mantra ‘liberation of homosexuals will also free heterosexuals.’
“We are organizing ‘Symposium against Discriminations’ for the World Human Rights Day on 10 December. We invite all parties particularly from civil society against discriminations on Education, Employment, Health, Housing and Social Services.”
Conservative policies which produce discrimination and inequality to be discussed
During the symposiums on social rights, conservative policies which produce discriminatory practices and inequality on the pretexts of medicalization of sexuality, “family values”, “obscenity” and “general morality” are to be discussed.
General sections of the Symposium against Discriminations which would be joined by the relevant parties and experts from social rights area as well as LGBT people are as follows:
Social Rights Symposium: Social Services for LGBT People
Right to Health Symposium: The Path of Homosexuality from a Disease to the Demand of a Right and LGBT Struggle against Inequality
Right to Education Symposium: Sexual Orientation and Gender Identity Discrimination in Education
Right to the City Symposium: Housing Right, Sex of the Place and of the City
Right to Labor: Working Life, Employment, Syndicate Movement
The Announcement made by the Kaos GL Association expressed its urge to start a discussion of “hate crimes”, “freedom of expression and of organization” and “safety of human rights advocates” with groups exposed to different discriminations in order to strengthen the solidarity in this field.
The Association expects abstracts and suggestions for the organization
Kaos GL told that it wants to make up the organization with the related parts of academia and civil society organizations working in a rights-based model for the Symposium against Discriminations which would be held on World Human Rights Week on 10-15 December 2012 in Ankara.
The association expects your presentation abstracts for the symposium to be sent to kaosgl@kaosgl.org until 20 September 2012 with a short biography attached.
Contact for the Symposiums
Symposium against Discriminations
Kaos GL Association
Address: GMK Boulevard, 29/12, 6th Floor, Demirtepe/Kızılay - Ankara
Tel: 0312 230 0358 Fax: 0312 230 6277
kaosgl@kaosgl.org