Tamara Adrian: Laws Are Not the Guarantee but the Prerequisite of Equality

Tamara Adrian who made the opening speech for the Anti-Homophobia Meeting: ‘Society is based on the fact that some have privileges and some are excluded." 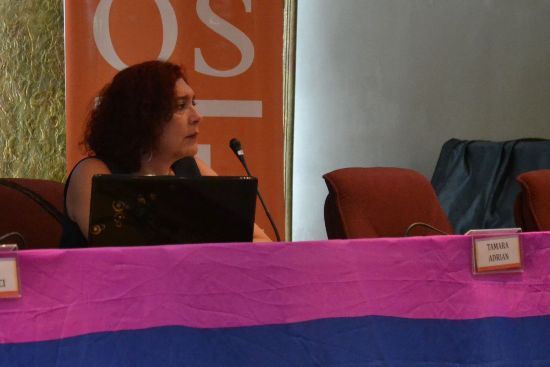 Tamara Adrian who made the opening speech for the Anti-Homophobia Meeting: “Society is based on the fact that some have privileges and some are excluded. As we learn intolerance in streets, at school, at home, at church; we need to learn equality and tolerance, as well.”
Trans activist, law professor and IDAHO Chair Tamara Adrian from Venezuela made the opening speech for the 9th International Anti-Homophobia Meeting held by Kaos GL Association in Ankara.
Speaking on the theme “freedom of expression”, Adrian asked: “Does freedom of expression include only the media? What about the expressions of LGBTI people?”
Here are the remarks that Adrian made in her speech:
“When I talked with the rapporteur of the United Nations, I asked why there is no data regarding LGBTI rights in their reports on discrimination of various kinds. And I was told to put international pressure.
“3 thousand events all around the world”
“Then I joined the IDAHO Committee. And the first thing to do was to add anti-transphobia. This year we discuss freedom of expression on the Day against Homophobia and Transphobia with about 3 thousand events.
“Intolerance is something we learn”
“Intolerance is not an innate characteristic. We learn it in streets, at school, at home, at church. We need to forget all these prejudices and intolerance. Relearning can happen where we learnt intolerance. We are all captured by the prejudices of our time.
“We build inequality as we believe in it”
“Societies are built upon hierarchies. Power builds itself upon the fact that some have privileges and other groups are deprived of those privileges. And this deprivation continues only when the marginalized identities are forced to accept the assumption that they are not equal to the privileged and finally when they believe in that.
“Being a minority is not about numbers”
“Being a minority or a majority is not about numbers. Although white people are minority in South Africa, they have the political power and majority. When we look at women’s suffrage, it is the same.
“Laws are not the guarantee of equal rights”
“The new front of equal rights is non-hegemonic sexual orientations and gender identities. The other issues are no resolved by protection on equal rights. Laws are not the guarantee but the prerequisite of equal rights. Racism did not disappear all of a sudden by law. But it is not possible to get these rights in reality without being a full citizen.
“Homophobia is a form of discrimination that is close to religious hatred. Because in order for homophobia to start, there must be a doubt over your sexual orientation or you must be out. However, transphobia resembles racism more in that sense. It is a more visible and direct form of discrimination.
“We are all prisoners and guardians of the gender prison...”
“We are all prisoners and guardians of the gender prison. We form stereotypes. We compete with one another to punish those who act differently. Even lesbians, gays and bisexuals happen to be transphobic. On one hand we are all prisoners of the gender prison, but on the other hand we become guardians of each other.”
Related news:
Diary of the 9th International Anti-Homophobia Meeting
*The 9th International Anti-Homophobia Meeting is funded by SIDA, the Norwegian Embassy and the project “Don’t Hate Me” run by Kaos GL and Pink Life associations.
Translation: Omer Akpinar