The Congress Initiative Also Unites Against Homophobia and Transphobia

Ahmet Türk said I am very happy because today, here I see the Picture of Turkey. 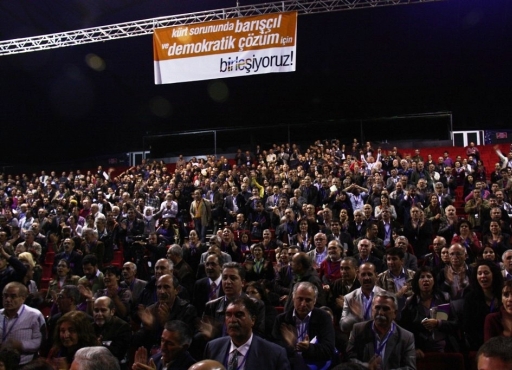 The Plenary Session of The Congress Initiative with the inviters such as Ertuğrul Kürkçü, Gültan Kışanak, Levent Tüzel and Sırrı Süreyya Önder began today in Anatolia Show Center.
The Congress Initiative which has participation from many institutions in addition to 826 delegates, began with the discussions of the regulations after the opening statements.
In the Session which intends to gather all opponent fractions under a single roof and which will last 2 days, the schedule and the regulations of The Congress Initiative will be discussed and concluded.
The banners ‘ against male domination, gender discrimination and inequality’, ‘ to bring democracy’, against ecological destruction, the exploitation of nature’, ‘for liberty and equality for people and beliefs’, ‘against homophobia and transphobia’, ‘against imperialist attacks and invasions’ took place on both sides of the main banner ‘we unite’ in 13 languages.
After the opening statements of Laz, Assyrian, Miahlemi, Armenien, Circassian, Georgian, Alevi, Nusayri, Gypsy, Greek, Arabian, Pomak, African, Yezidi and Kurmançi delegates, the whole room stood up and applauded the delegates while shouting slogan ‘ Long live the brotherhood of people’ for minutes.
After Akın Birdali Suavi, Ümit Şahin, Hatice Altınışık and İnci Hekimoğlu had been elected as The Council, a minute of silence was kept for revolutionaries. 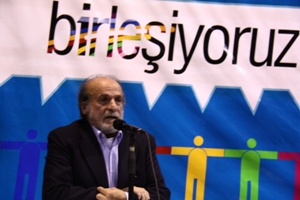 Ertuğrul Kürkçü made the opening speech and said ‘ Today we head towards all the possibilities we have, try to take out one and only thing through them; liberty of people, a new life, a new future, a new civilization. We refuse today’s capitalist civilization all together.’
The discussion of the regulations began after Gültan Kışanak, Ahmet Türk, Levent Tüzel, Sırrı Süreyya Önder, The Chairman of KESK (Confederation of Public Laborer’s Unions) and The Chairman of IHV ( Foundation of Human Rights) had made their statements.
Ahmet Türk said’ I am very happy because today, here I see the Picture of Turkey.’

The Congress Initiative Plenary Session will end with the discussions of the regulations and the schedule and the creation of the commissions.