The “L* Version of Love” book set is out!

A five-volume L* Version of Love book set, which includes the stories of the Women to Women Story Contest from 2006 to 2020, is on the shelves. 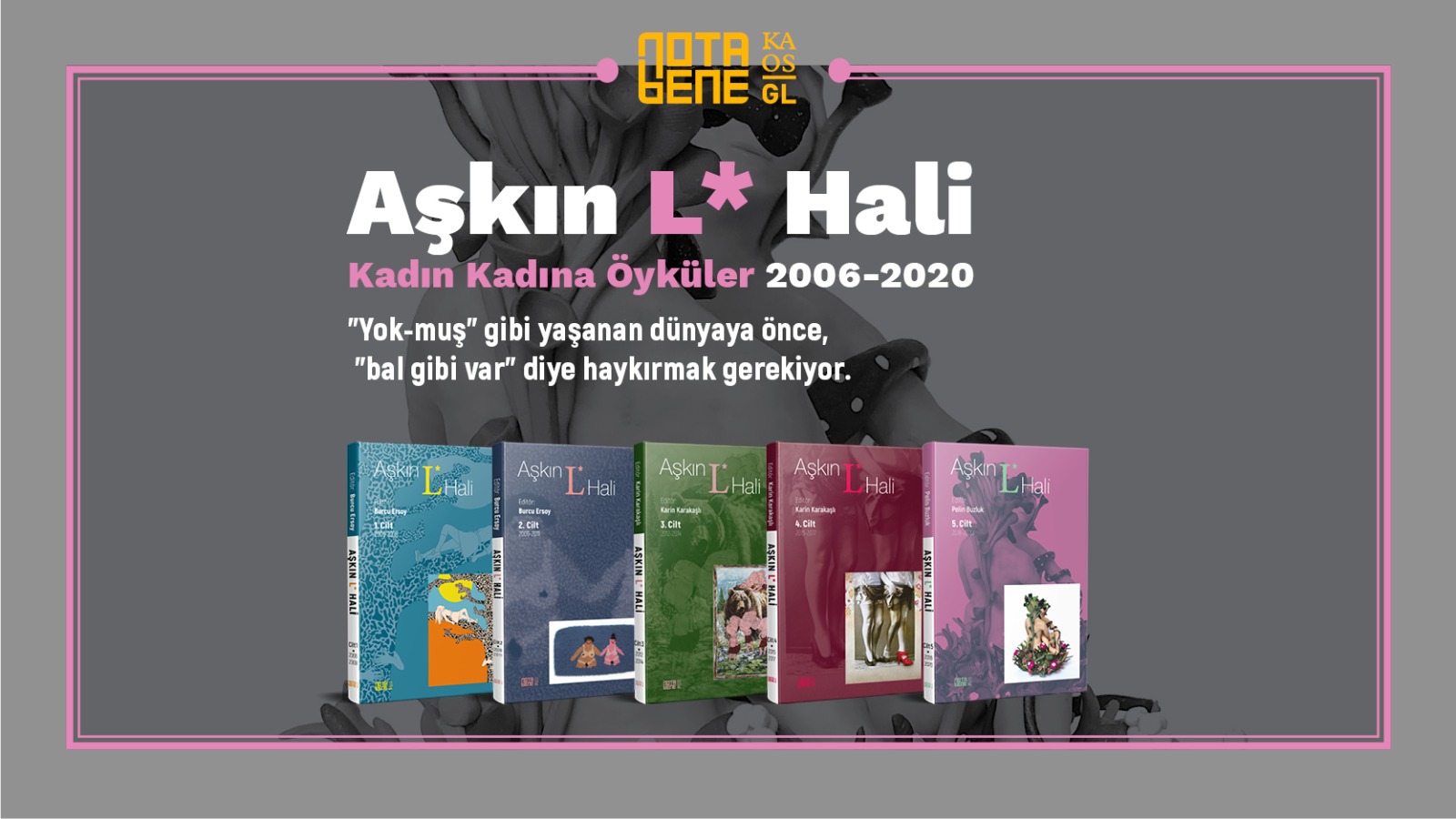 The L* Version of Love book set, featuring the selected stories from the Women to Women Story Contest, the first "from women to women, by women for women" story contest organized by Kaos GL Association with different themes every year since 2006, has been published by NotaBene Publications.

The L* Version of Love book set, featuring the selected stories from the Women to Women Story Contest, the first "from women to women, by women for women" story contest organized by Kaos GL Association with different themes every year since 2006, has been published by NotaBene Publications.

You can buy the set in Turkish from here.

Why the L* version?

The series editor explains why the "L*" was used in the book "L* Version of Love", which was published in 2009 with the selected stories of the first three years of the contest:

"Lesbian* is a fundamental objection to the heteronormative system that targets the differences in gender identity and sexual orientation, establishes identicalities by creating certain equivalences within itself in order to cancel these differences and establish homogeneous integrity within. It is a political category that reveals the fictional nature of monolithic discourse and shows the impossibility of self-identical distinctions."

“A category significantly embraced by the lesbian organization for the visibility, representation and empowerment of our struggle. And exactly because of this, while we embrace the Lesbian* identity, which is still perceived as a threat yet includes the diversity of all types of bodies in our opinion and as an identity where sexuality, desire, romance between women blossoms; we also prefer to use the word as Lesbian* to include all those who identifies themselves as lesbian, bisexual or queer and those who feel connected with the lesbian activism. We believe that the 'Lesbian*'; the '*' which emphasize our diversity that cannot be limited to categories, will reveal our potentials in literature, art, areas of struggle and the intersections of all these."

About the Women to Women Story Contest

The Woman to Woman Story Contest, which is the first from women to women, by women for women story contest, is being held since 2006. The contest, which set out to record the stories of "women who love women", today is a 15-year archive for gay and bisexual women's literature. The contest, first set out with the theme "The Happy Love Exists" with the purpose of "removing the dark image engraved in memories", brought the feelings of the "firsts" by the motto of "First Step, First Woman, First Love" in the following year. The third contest witnessed stories full of “Body and Passion” flowing from the pen of women. In 2009, it collected the stories of women pursuing “Utopias”  in the fifth contest with “(Did) I Love A Woman(?)”, the purest form of coming out to ownself. After the sixth contest “We Are Everywhere”, the seventh with the stories painted in “Purple” and the eighth contest by opening new roads to the lesbian struggle with the “Road” stories. While the contest pointed to the spontaneity of love with "Love is a Struggle" in its ninth year, it called "Voice" in its tenth year and waited for the stories of "when a woman falls in love with a woman, maybe those voices became a song". After the eleventh contest, which recorded the stories of "I got the ache, I got the cure" in memory of Zeliş Deniz, a lesbian activist who passed away as a result of a traffic accident she had; the stories influenced by the political geography were recorded in the twelfth contest with the theme "Then Love: Knows No Borders". The contest said "Remember your superpower!" in its thirteenth year, then, in 2019, it asked "The things that can arise from a friendship..." and hosted miracle stories that friendship reminded as they converged to love. With the theme of "Remember the Future", the competition opened itself to stories that carry the cheer and joy of love between women from past and future to this day.

The application period for Kaos GL's 16th Woman to Woman Story Contest was started recently. This year's theme is "Home". You can review the details in Turkish from here to participate in the contest with your story.